Each month, we issue The Mike’s Buy List for our DSR members. They get our best ideas for both U.S. and Canadian dividend stocks. The first Friday of each month, they receive our top 10 growth and top 10 retirement (yield over 4%+) investment ideas.

As we prepare for another surge of COVID-19 cases, it’s more important than ever to have the right holdings in your portfolio. Last time, I covered two dividend growth stocks. Now, let’s cover two options for income-seeking investors. 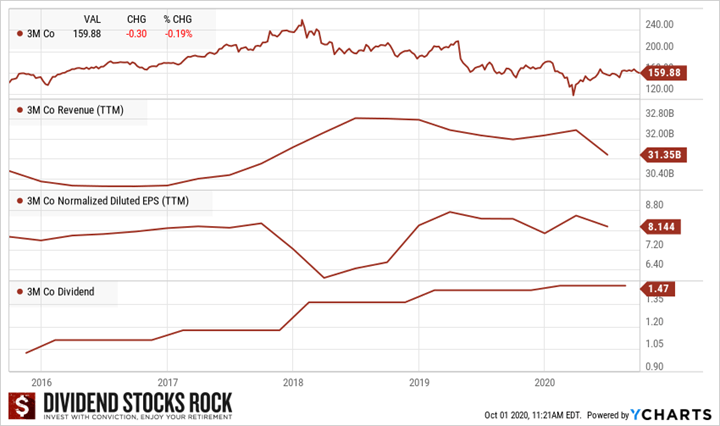 This giant doesn’t need much presentation. It’s probably on many investors’ watch list too… but it rarely is on sale!

3M had some good news for investors during September. It reported August sales growth of 2% Y/Y to $2.7 billion, led by a 23% rise in Health Care. Organic local currency sales declined 2%, while acquisitions, net of divestitures, and foreign currency translation, increased sales Y/Y by 3% and 1%, respectively. Total sales grew 6% in Safety and Industrial, and 3% in Consumer, while Transportation and Electronics declined 11%.

Following these results, the company estimates Q3 sales to be in the range of $8.2-8.3 billion vs. $8.11 billion consensus. It looks like MMM has gone through the worst and is ready to bounce back going forward.

The company also announced it is working with advisers on a potential sale of its food safety unit in a deal that could fetch $3.5 billion, Bloomberg reports.

3M is a multinational conglomerate that has operated since 1902, when it was known as Minnesota Mining and Manufacturing. The company is well-known for its research & development laboratory, and the firm leverages its science and technology across multiple product categories. As of 2019, 3M is organized into four business segments: safety and industrial, transportation and electronics, healthcare, and consumer. About 60% of the company’s revenue comes from outside the United States, with the safety and industrial segment constituting most of the firm’s net sales. Many of the company’s 55,000-plus products touch and concern a variety of consumers and end-markets.

3M’s competitive advantages are legendary. Industrial clients are reluctant to abandon such a world-class company for any competitors, as they know it will deliver quality products. 3M shows one of the strongest business models among the Dividend Kings, and its dividend growth potential will continue to be one of its most interesting characteristics for investors. By becoming the leader in R&D in many sectors and offering efficient products that work, 3M has created a unique economic moat that cannot be matched by its competitors. An investment in MMM is like buying the most solid money printing machine you will ever see.

MMM has been severely punished on the stock market since the beginning of 2018. First, the company faces many short-term headwinds, such as a slowdown in both the automotive and semiconductors sectors and the trade war with China. In 2019, several lawsuits rose in the U.S., bringing darker clouds around this stellar business. Finally, the COVID-19 saga is doing nothing to help 3M get back on track, as the world economy is now on its knees. While 3M makes N95 masks, don’t expect a huge revenue surge. This is just a small part of its business. This is a unique opportunity to grab shares of MMM with a yield of over 3.00%. Hurry up, the stock is on its recovery now.

3M has been paying dividends to its shareholders for over a century and shows more than 50 consecutive years of increase. Over the past few years, the company has been even more generous with its dividend increase, and the payout ratio has jumped over 50%. Still, there is plenty of room for management to increase it in the future. We have reduced our dividend growth expectations down to mid-single digits. Nonetheless, MMM is a very interesting pick for retirees.

Algonquin stock price is going up since its selection for our buy list. The company has been busy with small acquisitions lately.

On September 14th, Algonquin announced that it has entered into a definite agreement to acquire 53.5% of a Chilean water utility, Empresa de Servicios Sanitarios de Los Lagos S.A. (“ESSAL”), for $92.3 million. The acquisition will expand Algonquin Power’s operation in an investment-grade OECD country with one of the highest GDP growth rates and lowest country risks in Latin America.

This is an interesting play where Algonquin eyes international expansion during the pandemic. It’s one more reason to like this company!

Algonquin Power & Utilities Corp. is a North American generation, transmission, and distribution utility. Within its distribution group, Algonquin owns and operates regulated water, natural gas, and electricity distribution utilities in the United States. Most of the company’s revenue is derived from this division and, in turn, most of this division’s revenue comes from its distribution of natural gas. In its generation group, Algonquin sells electricity produced by its energy facilities, including hydroelectric, wind, solar, and thermal power plants. Algonquin’s wind farms account for most of its generation revenue. Finally, the company’s transmission group focuses on building and investing in natural gas pipelines and electric transmission systems.

Like many utilities, solid growth is coming from outside the company. AQN had about 120,000 clients in 2013 and now serves 762,000 clients. It achieved this impressive growth through acquisitions, the largest one being Empire District Electric for $3.4 billion, completed in early 2017. With a budget of $9.2 billion in CAPEX, AQN has several projects through 2024. These include more acquisitions, pipeline replacements and organic CAPEX. The utility counts on its regulated business to grow its revenue once those projects are funded. AQN shows a double-digit earnings growth potential for the foreseeable future, but expect a short-term slowdown due to the economic lockdown.

Like most utility companies, AQN uses leverage to support its growth. It currently shows about 50% of its capital structure from long-term debt, and the rest comes from the equity market. The company has posted solid growth since 2012, but this may slow down after the next round of projects in 2024. If regulators are less generous than anticipated, revenue growth may fall short. AQN will see its revenue decrease by 10-15% in 2020 due to the coronavirus pandemic. Economic lockdowns will affect commercial and industrial demand for power. However, management still increased its dividend in May (+10%) and confirmed their CAPEX through 2024. Finally, AQN still runs pipelines and is not sheltered from spills.

The dividend fluctuation is due to currency, as the company once paid its dividend in CAD and now it is in USD. As a Canadian company, 93% of AQN EBITDA is in the U.S. Therefore, there is no reason to worry for the company’s cash distribution if the stock drops and the yield reaches close to 5%. With projects generating cash flow, AQN expects to raise its dividend by 10% CAGR and its EPS to grow at a faster rate. Shareholders can expect a high-single digit dividend growth rate for the next decade.

REITs are Good Options Too

Most retirees love REITs because their sole purpose is to distribute as much money as possible to their units holder. This sounds like music to the ears of those who are looking for a nice paycheck coming into their bank account. Canadian REITs on my Top 3 should not only sustain their dividend payment, but also to increase them. There could be other good picks in there too!