This week, there was a flurry of activity, with the US, England, Japan, Brazil, and Russia all maintaining low-rate policies. All banks noted that growth was COVID-dependent.

Central banks look at policy from a probability perspective – the more likely they view a scenario, the more they will tailor policy towards that possibility. The pandemic greatly increases volatility, making planning that much harder.

Let’s look a bit deeper into each bank’s situation, starting with the new economic projection from the Fed: 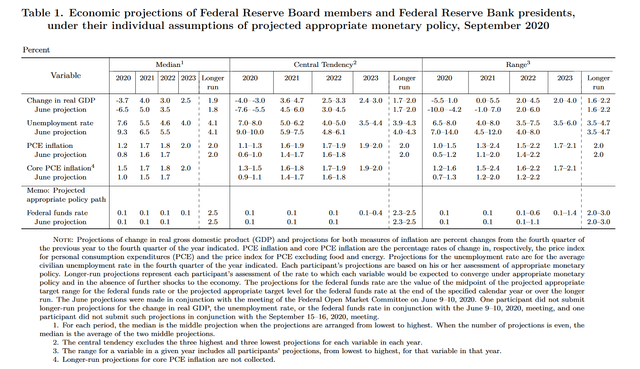 GDP growth for 2020 is projected higher while growth during the next two years is slightly lower. Current and future unemployment is lower while inflation is modestly higher. The central tendencies for unemployment and GDP have come in, which means, in general, there is less volatility in the projections. Inflation is projected to run hotter, although it will still be at low levels.

The Minutes accompanying the Bank of England’s policy release observed that consumer spending had returned to pre-pandemic levels. Business spending, however, was very subdued (emphasis added):

According to the Bank’s Agents, investment intentions had remained very weak, although the outlook for digital and other forms of investment in technology had picked up. Companies in the August Decision Maker Panel (DMP) had reported a weaker outlook for investment than in July, with spending expected to be around one-third and one-quarter lower than otherwise due to the pandemic in the third and fourth quarters of this year respectively. Covid-induced uncertainty had remained elevated in August according to the DMP, with almost 90% of businesses reporting that Covid-19 was one of their top three sources of uncertainty. Three-quarters of the companies in the August DMP expected this uncertainty to persist until at least April 2021. Just under half of respondents had ranked Brexit as one of the top three sources of uncertainty for their business

It’s likely the UK businesses will be very guarded in their capital spending so long as the pandemic is ongoing. This pattern of economic growth – strong consumer spending and weak business spending – is occurring in many economies.

The Bank of Japan was very guarded in its outlook:

With regard to the outlook, Japan’s economy, with economic activity resuming, is likely to follow an improving trend through the materialization of pent-up demand and supported by accommodative financial conditions and the government’s economic measures. However, the pace of improvement is expected to be only moderate while the impact of COVID-19 remains worldwide. Thereafter, as the impact subsides globally, the economy is projected to keep improving further with overseas economies returning to a steady growth path.

This is probably the best read of the most likely economic trajectory.

Despite the economic problems caused by the virus, Brazil’s central bank was more guarded in its policy projections (emphasis added):

The Copom believes that the current economic conditions continue to recommend an unusually strong monetary stimulus but it recognizes that, due to prudential and financial stability reasons, the remaining space for monetary policy stimulus, if it exists, should be small. Consequently, possible future adjustments to the current degree of monetary stimulus would occur with additional gradualism and would depend on the perception of the fiscal trajectory, as well as on new information that changes the Committee’s current assessment about prospective inflation.

Brazil’s interest rate is 2% – a very low rate. If the bank takes a gradual approach to policy, it theoretically has eight more cuts on the table, giving it the ability to be increasingly accommodative. It appears it is taking advantage of that to continually goose economic growth through modest but continual rate reductions.

Unlike most other central banks, Russia is projecting higher inflation (emphasis added):

The remaining downward deviation of the economy from its potential creates disinflationary pressure. At the same time, the risks of inflation substantially deviating downwards from the target in 2021 are limited owing to the key rate decisions already made and the accommodating monetary policy pursued. According to the Bank of Russia’s forecast, given the current monetary policy stance, annual inflation will reach 3.7-4.2% in 2020, 3.5-4.0% in 2021 and will remain close to 4% later on.

This explains why the bank kept rates at 4.25%.