Intel (INTC) shares are down by over 20% since July peaks, ever since it announced that its 7nm node is delayed by six to twelve months. This gave birth to a plethora of speculative discussions across various investing forums on how the chipzilla’s management can possibly boost shareholder returns. Amongst the many proposals, fellow Seeking Alpha contributor The Value Portfolio pitched an intriguing idea that Intel may want to spin off Mobileye. While it was a well-written and clearly articulated thesis, I believe such a move may be detrimental to Intel and its long-term shareholders for now. 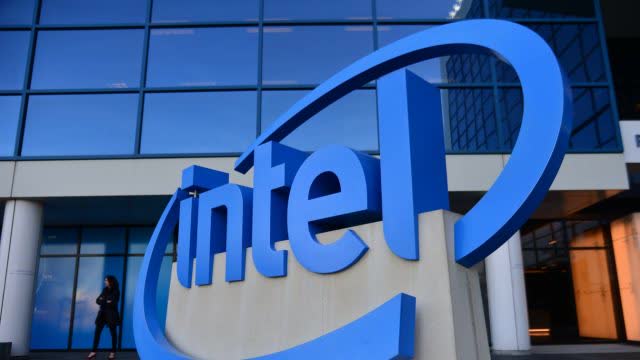 For the uninitiated, Intel acquired Mobileye back in 2017 for $15.3 billion. This ADAS and autonomous driving systems startup had recorded only $358 million in revenue in FY16, which meant the buyout took place at over 42 times its trailing fiscal year sales. Intel’s management was openly lambasted across investing forums for carrying out such a pricey buyout, but very few understood at the time that this was Intel’s way of securing a long-term growth driver.

Fast forward to 2020 and valuations for similarly positioned companies – that have a presence in the field of autonomous driving – still haven’t cooled off. The table below highlights that Nvidia (NVDA) and Tesla (TSLA) are some of the priciest stocks amongst the lot. Sure, both the mentioned stocks have sold off in the last week – down between 17% and 30% at the time of this writing – but they’re still trading at obscenely high multiples, at least when compared to Intel. 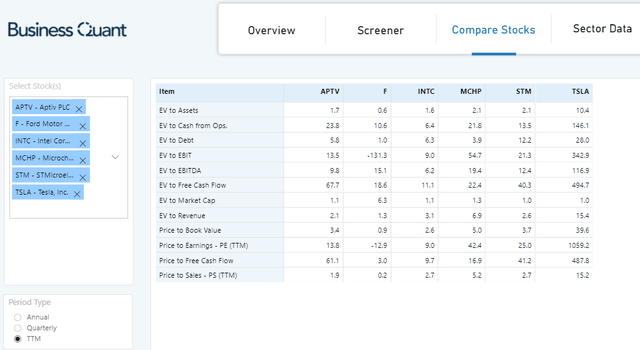 The chipzilla is trading at relatively moderate multiples because its core chipmaking business is currently surrounded by uncertainty. There’s the risk that there may be a widespread industry transition from x86 to ARM chips across both PC and data center markets over the coming years, resulting in a reduced demand for Intel chips. Also, per its own disclosure, Intel’s 7nm node is delayed by about six to twelve months. This may hurt the company’s competitive positioning and lead to a loss of market share, and possibly even its pricing power. So, the possibility of a Mobileye spin-off starts to look like a viable option.

This is particularly true as an independent Mobileye would be isolated from challenges surrounding Intel’s core chipmaking business, and hence, the spun-off company is likely going to attract much higher valuation multiples on a standalone basis. Mobileye generated $872 million in revenue in the last four quarters. If we attach Nvidia’s TTM P/S multiple of 24x to Mobileye, then we arrive at a business valuation of about $21 billion for the spun-off company. That’s no chump change, and this line of thinking suggests that there’s some serious value-unlocking potential for Intel.

But things are not so simple, at least not for the time being.

Why I’m Against the Proposal

Per our database, Mobileye has registered sequential as well as year-over-year revenue growth in 9 of its last 12 quarters. Barring the COVID-19-hit second quarter, it’s evident from the chart below that the company’s revenues grew by a 21.5% in Q1 and 28.5% during Q4, on a year-over-year basis. Clearly, the business division is still in its growth phase and is yet to plateau out for Intel to consider any kind of divestments or spin-offs just yet. 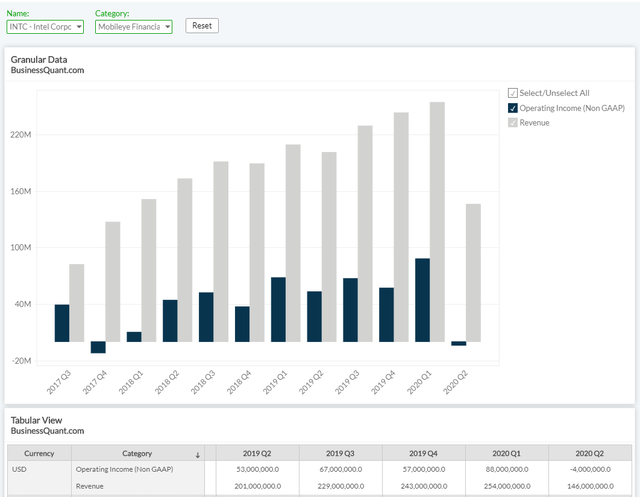 Another point worth noting here is that the chipzilla isn’t exactly strapped for cash such that it would be forced to prematurely sell its fast-growing assets to maintain healthy liquidity levels. The company actually generated a record-high free cash flow amounting to about $21.9 billion for the trailing twelve months ending June 27. This is more than 25 times Mobileye’s revenues for the period. So, I think it’s safe to say that Intel has deep enough pockets to let its said business division mature over time without having to worry about its finances.

Intel’s deep pockets also provide financial stability and flexibility to Mobileye, so that the latter is able to target high-growth opportunities without being bottle-necked by financial limitations. The ADAS and autonomous driving systems provider actually recorded an operating loss of $4 million in the last quarter, and I contend that it will have access to more growth capital whilst being a part of Intel than when being a standalone business.

Next, let’s look at the table below. Mobileye’s revenues grew by 25% in FY19, but let’s attach a relatively conservative growth estimate of 20% for its next three years to make a reasonable argument.

The business division, by this estimate, should go on to record $1.5 billion in revenue during FY23. Now, attaching a 24 times P/S multiple to this sales figure leads us to a business valuation of $36.5 billion – much higher than the $21 billion figure discussed earlier in the article. I think it’s needless to say, but this valuation figure would be much higher if we factored in a much more aggressive growth figure for Mobileye’s revenues. So, I believe it’s too soon for Intel to consider a divestment or a spin-off of Mobileye just yet. 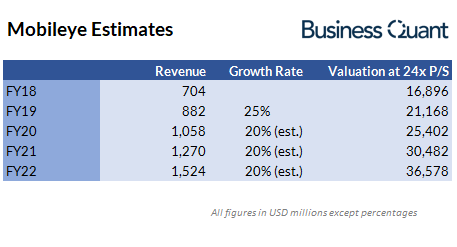 Lastly, the chipzilla raised the stakes by acquiring transit data firm Moovit for $900 million in May, to bolster Mobileye’s mobile service offerings. So, it’s in the strategic best interest of Intel and its shareholders to let this business division mature over the coming three to four years at the very least, rather than spinning it off for modest short-term gains.

The key takeaway here is that it doesn’t make much financial or strategic sense for Intel to spin off Mobileye just yet. This may be a logical course of action a few years down the line, when the business vertical has grown considerably in size and has the financial muscle to aggressively fund its own growth, but we’re not there yet. So, readers and investors may want to rule out this possibility for the time being at least. Good luck!

Author’s Note: I’ll be writing a report on AMD and Intel next week, you can stay updated by clicking the “Follow” button at the top of this page. Thanks! 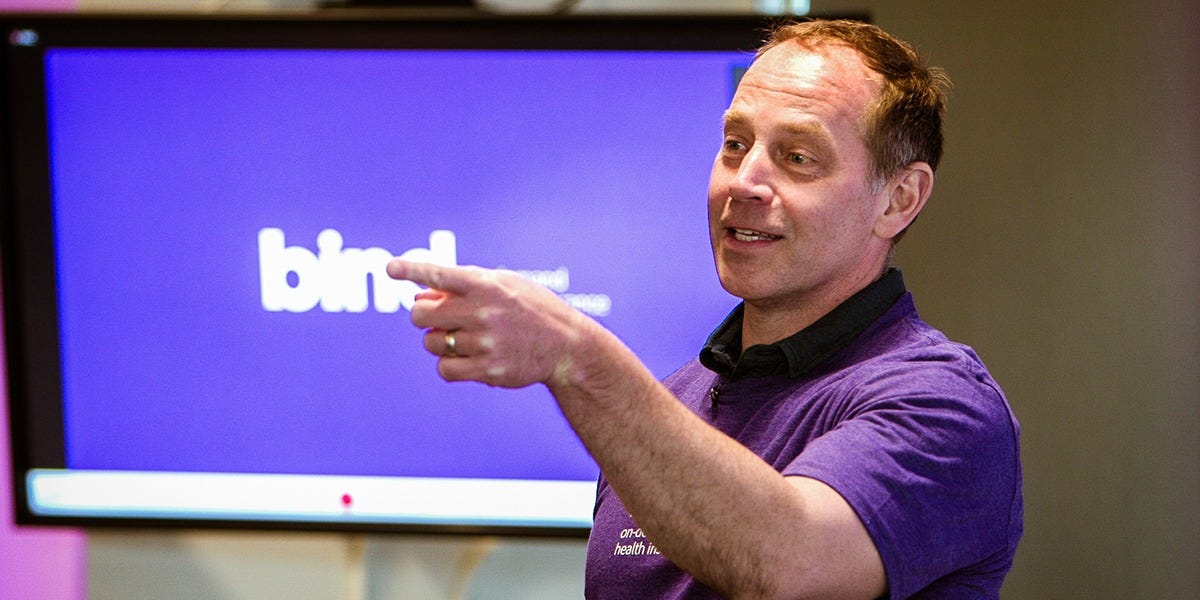