Welcome to Orchid’s Palladium Weekly report, in which we discuss palladium prices through the lenses of the Aberdeen Standard Physical Palladium Shares ETF (PALL).

PALL has moved around 4% higher since our last publication from August 3, despite the 6% sell-off over the past week.

Like other precious metals, palladium has been hurt by a marked rebound in the dollar, pressuring prices lower. 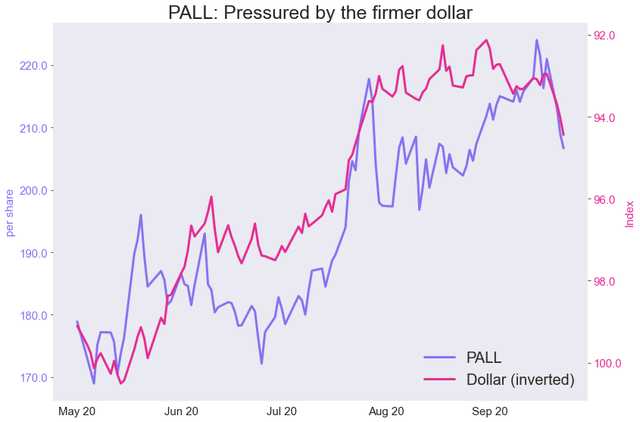 Other precious metals like silver and platinum have suffered even more over the past week, as can be seen below.

However, we view the current sell-off in PALL as transient because 1) we think that we are still in a reflationary environment (in which the dollar should be in a sustained downtrend) and 2) palladium’s fundamentals are due to strengthen due to a recovery in automotive demand led by China in a context of tighter output trends.

Speculative and investor sentiment toward palladium seems to have shifted positively in recent months, which could further underpin the uptrend in prices.

We, therefore, take advantage of the volatility of palladium prices to reinforce long positions in PALL. 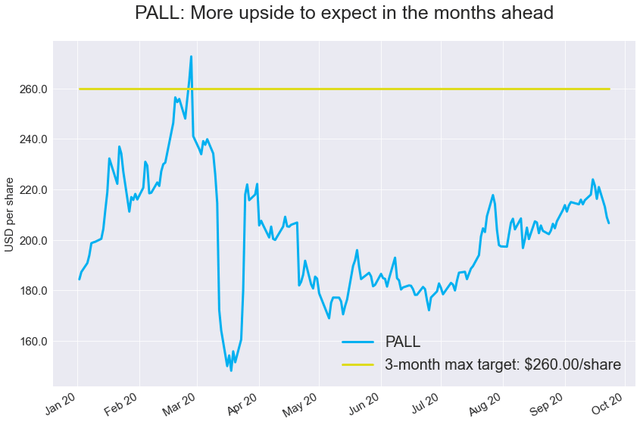 For investors seeking exposure to the fluctuations of palladium prices, PALL is an interesting investment vehicle because it seeks to track spot palladium prices by physically holding palladium bars, which are located in JPM vaults in London and Zurich. The vaults are inspected twice a year, including once randomly.

The Fund summary is as follows:

PALL seeks to reflect the performance of the price of physical palladium, less the Trust’s expenses.

Liquidity conditions are poorer than that for platinum. PALL shows an average daily volume of $3 million and an average spread (over the past two months) of 0.33%. 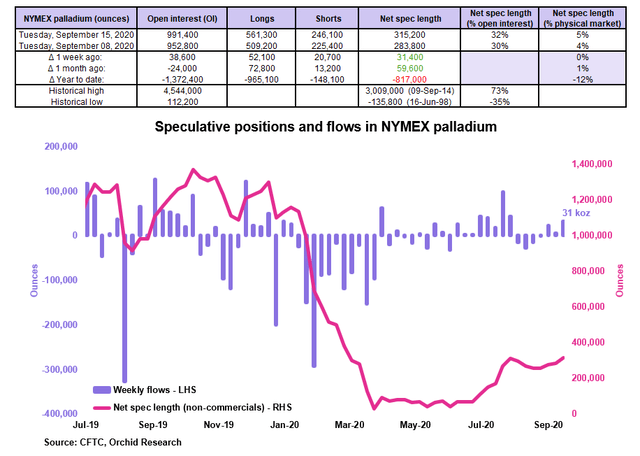 The speculative community increased its net long position in NYMEX palladium by 31 koz in the week to September 15, according to the CFTC. This was the largest weekly increase since July.

A positive swing in sentiment toward palladium appears to have emerged since late Q2. Speculators have boosted by the equivalent of 275 koz their net long positions in NYMEX palladium since June 2.

Implications for PALL: If the positive change in spec sentiment toward palladium is sustained, the positive impact on the NYMEX palladium price and thus PALL could be significant. It will be interesting to see whether the recent sell-off in palladium prices has impacted palladium’s spec positioning. 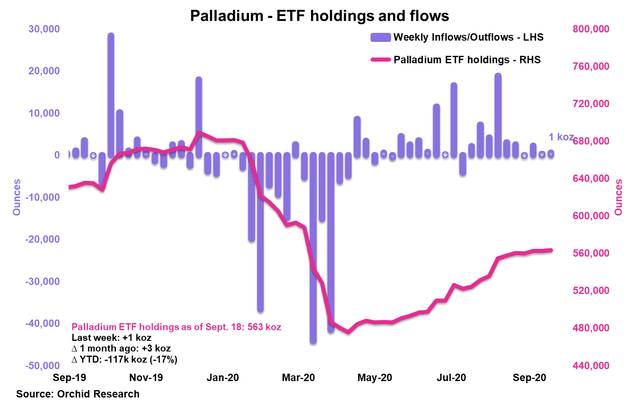 ETF investors left their palladium holdings essentially unchanged in the week to September 18, according to our estimates.

However, ETF holdings have rebounded well since hitting a low of 475 koz in mid-April, which could signal a positive swing in investor sentiment.

Given the weakness in automotive demand for PGMs this year, the renewed appetite for palladium from ETF investors is a positive sign, offsetting partly the transient fundamental weakness of the palladium market.

That said, it is not enough to produce the same level of tightness as that prior to the pre-COVID-19 shock. The one-month lease, which can be viewed as a proxy for physical tightness, is currently at 1%, massively down from its peak of 30% in January.

Implications for PALL: The renewed increase in ETF buying interest for palladium could underpin the uptrend in the NYMEX palladium price, which should, therefore, exert upward pressure on PALL.

The recovery in auto sales continues to be driven by China

According to the China Passenger Car Association (CPCA), Chinese passenger vehicle sales amounted to 1.73 million units last month, an increase of 6% MoM, and 7% YoY. This resulted in a narrowing contraction of -16% YoY in the first eight months of the year. Dealer inventory depth, which is published by China Auto Dealer Association (CADA) dropped to 1.5 months (vs 1.91 in July), showing some destocking at work.

Given the faster-than-expected recovery in the Chinese automobile market, the CAAM has revised its sales forecasts for 2020, to a 10%-20% decline from a 15%-25% decline previously in May.

Implications for PALL: Should the Chinese automotive market be finally out of the woods, a healthy increase in automotive demand for palladium in the coming quarters could be plausible. This should, therefore, strengthen palladium’s fundamentals, the NYMEX palladium spot price, and thus PALL.

We remain bullish PALL despite the recent sell-off in the precious metals space.

Palladium benefits from relatively tighter fundamentals than platinum. While the palladium market should be essentially balanced this year, the platinum market is expected to record a large surplus.

Given the fast recovery in the automotive market in China, we think that automotive demand for palladium could increase well in the coming quarters. Given the tightening of refined output, the palladium market could swing back into a deficit as soon as next year.

The speculative/investor community seems to have picked up this bullish trend since they have lifted notably their long exposure to palladium in recent months.

In this context, we view any sell-off in PALL as transient, whether the bout of weakness is triggered by technical factors or macro factors. Over the past week, the sell-off has been predominantly driven by the renewed dollar strength. We view the firmer dollar as a short-term phenomenon, expecting the reflation theme to prevail in 2021.

Against this backdrop, we are inclined to buy the dips in PALL, setting a 3-month bullish target of $260 per share.