Plunging crude oil prices earlier this year have created a financial tsunami that washed over the energy sector. That left a wave of destruction in its wake. Several companies had to file for bankruptcy, led by notable names like shale pioneer Chesapeake Energy and leading offshore driller Valaris. 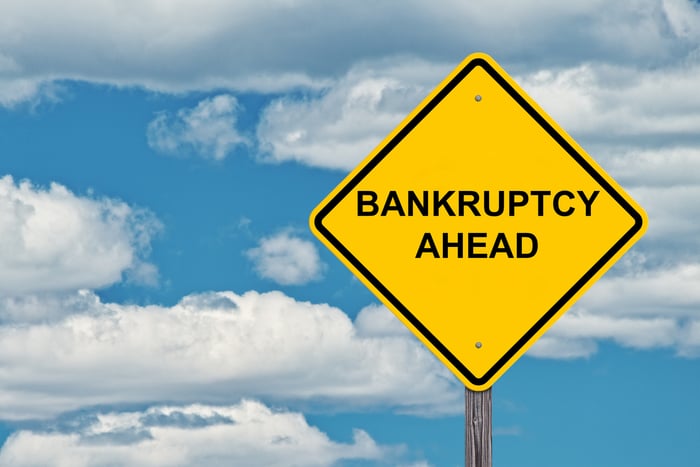 The next domino to fall

This year’s oil price plunge has wreaked havoc on the offshore drilling sector, causing a wave of bankruptcies that have engulfed the industry. Not only has Valaris gone under, but Dimond Offshore Drilling and Noble Corporation also filed. That washout will likely continue as Transocean seems like the next in line to join its peers in the bankruptcy process.

Shares of the company plunged last month after Valaris went under on fears that it would take Transocean down with it. The company is already exploring strategic alternatives to address its massive debt load, which currently stands at about $9 billion.

While the company is looking to ease that burden by trying to complete a $2 billion debt exchange, it has run into some opposition. If the company isn’t able to get some breathing room soon, it might have no choice but to file for bankruptcy to restructure its debt.

Running out of liquidity and time

Tumbling crude oil prices have also put pressure on deeply indebted oil producers, as several joined Chesapeake in bankruptcy this year. One of the next to file could be Oasis Petroleum. Among its issues is that its liquidity is running dry. As of early July, the company had just $50 million in cash and less than $100 million available to it on its credit facility after its banks slashed its borrowing base when crude prices crashed.

Because of that, Oasis cut capital spending to generate free cash to help repay debt. Unfortunately, with crude oil prices selling off again in recent weeks, that plan is under pressure. That’s coming at an inopportune time because the company’s banks will revisit its credit facility this fall. If they cut the borrowing base again, the company might not have any choice but to file for bankruptcy and restructure its debt. That would enable it to address its shrinking liquidity and reduce some of its nearly $2.3 billion debt burden.

Chipping away as fast as it can

Oilfield-service company Nabors Industry is struggling with the drilling slowdown that followed this year’s crash in crude prices. With oil companies not drilling too many new wells these days, the company had to idle a significant portion of its drilling fleet. That’s impacting its ability to generate cash to repay debt. On a positive note, the company repurchased $187 million of debt during the second quarter, cutting its remaining near-term maturities to $139 million for next year and $154 million for 2021.

However, instead of bouncing back during the second half, oil market conditions have weakened in recent weeks because COVID-19 cases continue to spike worldwide. Because of that, analysts are growing increasingly worried about Nabor’s ability to weather this storm.

For example, Goldman Sachs recently downgraded the stock to sell because of its “limited effective liquidity,” significant debt position,” and “a likelihood of breaching a net leverage ratio revolver covenant in early 2021.” Given that dire outlook, the company might not have any choice but to file for bankruptcy to restructure its debt and get some more breathing room.

The wave isn’t over yet

This year’s plunge in oil prices sent shockwaves through the entire energy sector, unleashing a massive bankruptcy wave. While dozens of companies have already filed, more will likely join them in the coming months, with Transocean, Oasis Petroleum, and Nabors Industries among the most likely candidates. Because of that, investors should steer clear of these oil stocks.