Taiwan’s Economic Daily recently published an article about the growing Advanced Micro Devices (AMD) business at TSMC (TSM). What makes this article interesting is that Economic Daily is an influential paper and contrary to any concerns from investors, it makes sense for AMD to be moving incremental business from GlobalFoundries to TSMC. We see this as a net positive for both AMD and TSMC.

There are several good reasons for this rumored move.

Note that TSMC comes up with a leading-edge node roughly every two years. 7nm in 2018; 5nm in 2020; 3nm in 2022, and so on. As a process matures, the cost per wafer decreases rapidly. For customers, this works because not everyone can afford a leading-edge process and not everyone needs the performance offered by the latest technology. Customers move to a new process based on economics – for some, being at leading-edge is a must and for others it makes sense only when the wafer prices fall to a certain level. As time marches on, adoption grows and what was once leading edge becomes performance mainstream, then mainstream, and then an old lagging process.

TSMC’s investment in process do not generate attractive ROI unless the process goes through that entire life cycle and the capacity is nearly fully used during the life of the process. This becomes a challenge when a large customer like Apple (AAPL) mainly uses the leading-edge capacity and maybe one node from the leading-edge but does not have much use for older technology. For example, Apple will use the latest 5nm process in 2020 models, and 7nm process in older models but may not have any meaningful volume in older nodes. When TSMC introduces 3nm node, much of Apple wafer needs will be in 3nm/5nm and the 7nm volumes will plummet.

One thing that also helps TSMC is that Apple is likely paying a nice premium for the capacity bubble it leaves behind. Not everyone might have Apple kind of economic power. When it comes to AMD, it becomes challenging for TSMC to find customers for older process if all AMD wants is leading edge capacity. If AMD can bring in volume for the process it has vacated for its CPUs, then economics improve for TSMC and it would also be possible for TSMC to give AMD better pricing for helping improve utilization of TSMC process.

Note that AMD does not need to use the cutting-edge capacity for all its devices. For example, the Company’s cheaper CPUs for low-end laptops and Chromebooks do not need cutting edge process as cost becomes a more important criteria for these chips than performance. Same goes with low-end graphics chips. Using the capacity bubble it is creating by moving high-end chips to newer nodes, to fabricate these low-end chips can be attractive to AMD.

Consolidating more and more designs at TSMC streamlines AMD operations, also reduces engineering effort. AMD engineers will have to work with fewer processes, and this too could help the Company optimize its designs.

While GlobalFoundries has been an able partner in the past, it has found that leading edge capacity race is expensive and has reduced its investment in cutting edge processes. This dynamic, over time, will force AMD to move more and more designs to TSMC as GlobalFoundries may no longer be a viable choice for new designs – even at the low-end.

Note also that even when it comes to the high-end HEDT and server CPU solutions, AMD chose to use TSMC 7nm process only for the compute chips but not the IO chips (see image below). 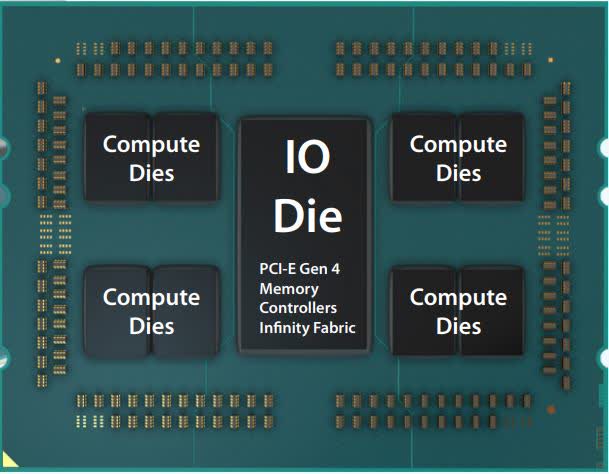 The IO die is manufactured in 14nm process for two reasons. The first one, and the more commonly known one, is that the IO chip does not benefit much from the 7nm process and it is much more cost effective to keep it on GlobalFoundries 14nm process (there is some speculation that AMD also uses TSMC 14nm process for one of the IO chips). The second one, which is less known and unconfirmed, is that AMD likely needed to license special IO designs which, at the time AMD was designing Zen 2, were available in 14nm but not in 7nm.

With passage of time, the required third-party IO designs are likely to become available in TSMC 7nm technology. If so, migrating the IO chip to 7nm and using the increased transistor density to add new functionality could make sense to AMD for future product generations.

Having the compute and IO dies made at TSMC is likely to improve AMD’s operational efficiency. Since TSMC has been looking to grow its packaging business, such a move as the one mentioned here could also be setting groundwork for TSMC winning some or all of the packaging business from AMD. If so, this could also help reduce AMD manufacturing cycle time for the complex multi die devices.

Considering the above factors, moving incremental business from GlobalFoundries to TSMC is the logical progression of AMD operations and will likely reduce operating and product costs to AMD over time. AMD’s opex will decrease and margins will increase over time.

This is also a positive for TSMC as TSMC is continuing to grow market share in the foundry space and increasing revenues in the desirable leading edge process business.

Subscribers to Beyond The Hype have access to all the linked articles that may otherwise be inaccessible. For timely, cutting-edge insights, analysis and investing ideas in technology, semiconductor, solar, battery, autonomous vehicles, and other emerging technology stocks, check out Beyond the Hype. This Marketplace service gives you early access to my best investing ideas, along with event driven and arbitrage opportunities when they are most edgy and actionable.

Act before prices increase on 10/1: https://seekingalpha.com/instablog/9110881-enertuition/5498111-join-beyond-hype-price-increase

Disclosure: I am/we are long AMD, TSM. I wrote this article myself, and it expresses my own opinions. I am not receiving compensation for it (other than from Seeking Alpha). I have no business relationship with any company whose stock is mentioned in this article.

Additional disclosure: Short NVDA.
Any positions disclosed by the Author are part of a diversified portfolio. Author considers lack of diversification to be one of the gravest errors made by many investors.
Shorting is a sophisticated investment strategy that requires superior investment skills and must be avoided by all but experienced investors with the appropriate skill and wherewithal.