In 1990, Haifa-born Ronny Rosenthal made headlines when he moved to Liverpool Football Club from Standard Liege in Belgium. He scored seven goals in eight games that season, and was instrumental in helping Liverpool win their 18th English League title.

Thirty years later, Liverpool has just won its first title since, and Rosenthal, one of Israel’s most successful soccer exports, still finds himself involved in the game working as an independent consultant in London. In his role as consultant, Rosenthal works with some of Europe’s top teams and has discovered players such as Cristiano Ronaldo, Vincent Kompany and Pierre Emerick-Aubameyang.

What these players and Rosenthal have in common is they are all top athletes.

“About every 10 years there is a certain upgrade in the level of players in terms of athleticism,” says Rosenthal. “At the time, I was among the quickest in the league… If I was among the top 10 sprinters in the league 30 years ago, my speed today would maybe make the top 100. I knew this when I started my business — I needed something different and was always looking at the top athletes in [the game].” 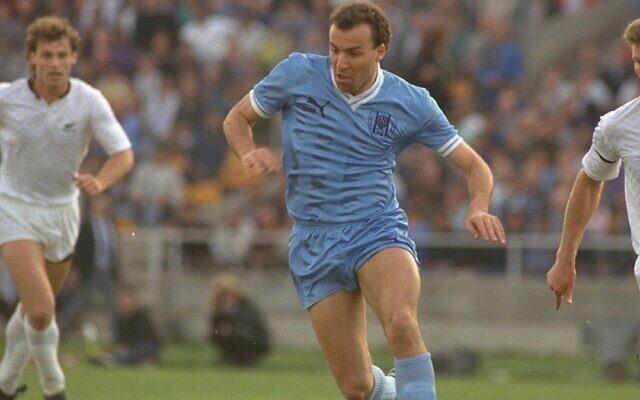 Nicknamed “Rocket,” Rosenthal got his start in professional soccer at the age of 16, playing for his hometown team, Maccabi Haifa. He naturally played forward and he was promoted to the Israeli national team at the age of 20. Rosenthal remembers always wanting to play in a top soccer league. After winning two championships with Haifa, he was transferred in 1986 to Club Brugge in Belgium.

“I was lucky. There was an Israeli guy who lived in Belgium, who called me. He followed Israeli soccer,” says Rosenthal. “In the end, the reason why I left Israel is because I had speed, natural speed. That was always my main weapon. Who doesn’t want a player that’s got a certain quality that important?”

In Belgium, Rosenthal met his wife and became a top goalscorer for Standard Liege. In one season he netted 15 league goals and another five or six in the Belgian Cup. He remembers the reactions he got as a player coming from Israel. 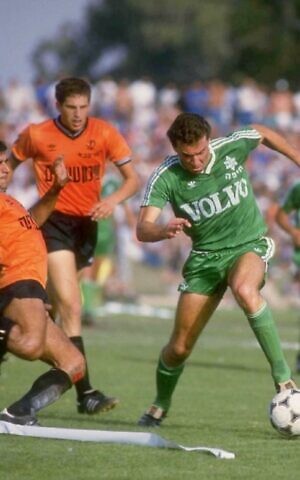 “Coming to Belgium in the ’80s,” says Rosenthal, “you’re Israeli, you’re coming to a different culture. People would say, ‘Oh you’re coming from a war zone.’ That was the normal thing. You needed to explain that it wasn’t exactly like that. It takes time.

“Israel today is much, much better and developed in terms of public relations, because I can see what the reaction is today. When I speak with people that I’ve never met, and they talk about Israel like they know it, they say, ‘Oh, I would like to go and visit.’”

With his successful season at Liege, Rosenthal began to attract interest from top clubs around Europe. He signed a contract for a team in Italy, the biggest league in the world at the time, but in the end it didn’t materialize.

After going on trial at Liverpool, the team eventually signed him permanently and he stayed for four seasons.

“I had a great time at Liverpool, but it was limited,” says Rosenthal. “I mean in the first two years, I played more regularly than the last two. A new coach comes and he’s got new ideas.”

From Liverpool, Rosenthal moved to London and Tottenham Hotspur, where he received a similar amount of playing time which included a memorable three goals in an FA Cup game against Southampton.

“I always had the support of the club who loved me there, and a good relationship with the fans. Everywhere I played there was never an issue,” Rosenthal says. 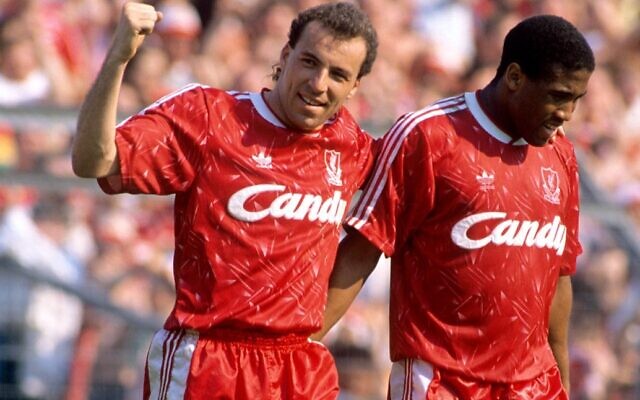 Israeli soccer legend Ronny Rosenthal says he never let racism from the stands get in his head. (Courtesy)

These days, it’s more common to find players of different races and nationalities on the field together. In turn, there has been an increase of reports of racism in football. English anti-racism group Kick It Out reported a rise in incidents from 319 to 422 during the 2018-19 season, including 50 incidents related to anti-Semitism. There have been videos of fans singing racist and anti-Semitic songs online, and incidents of players walking off the field in a response to abuse.

One such alleged incident took place on December 22 at the Tottenham Hotspur Stadium in a match against Chelsea. Chelsea center-back Antonio Rudiger claims that he was subjected to racist chants during Chelsea’s Premier League win. While subsequent investigations led the Spurs and police to conclude there was no racist incident, during the match a referee asked that a PA warning be issued to fans against making abusive chants.

Rosenthal remembers how it was for him as a rare Israeli and Jew during his playing days.

“For me, it’s the same. It’s just that maybe you hear about it today. I can’t tell you that I had a major incident, no. When I played, I’m focused on the game, so I don’t hear anything. Surely there are few people who are anti-Semitic, and surely they are shouting, but I can’t hear it,” he says.

Occasionally when he was warming up near the stands, Rosenthal would hear fans trying to get into his head by shouting slurs, but he wouldn’t pay them any mind, he says. 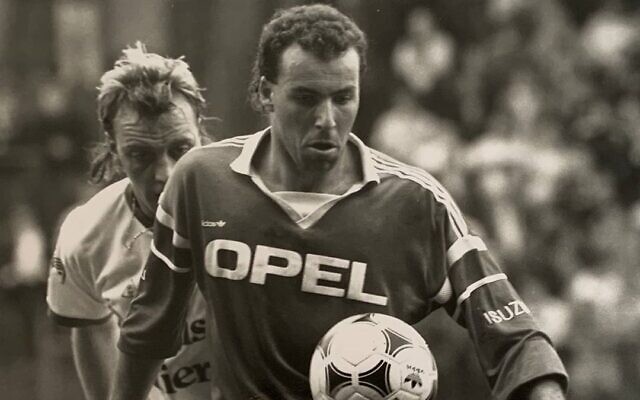 “I was never an impulsive guy who would turn to the crowd and start showing that you heard them, and start to react,” he says. “If you don’t react, the fans say what’s the point to carry on doing it. At the time 30 years ago, these things existed, but the media didn’t cover it so much. Today, you have 20 cameras in every game, so every little thing you can spot.”

After three years at Tottenham, Rosenthal finished up his playing career at Watford, during which the team climbed two divisions back to the premier league. His experience at Watford, in part as a veteran helping younger players, may have benefited Rosenthal in his current role as a consultant. He’s been giving advice to teams on players all over the world for the last 20 years.

“I have many clubs that call me because they need specific positions,” Rosenthal says. “Working in property, you have a real estate agent who knows exactly the needs of the clients, and knows how to find something that no one sees. Cristiano Ronaldo, for example. I had transferred a player to Newcastle — Hugo Viana — and I was scouting [for players at] Sporting Lisbon in Portugal. That’s how I discovered Cristiano Ronaldo. I’m always ahead in terms of understanding who will reach a certain level, and automatically certain value. This is me.” 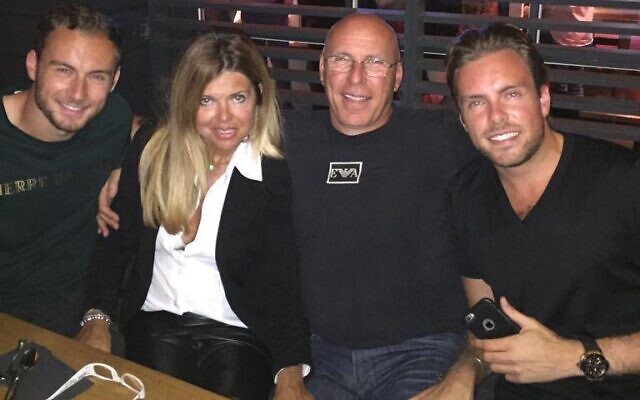 Rosenthal’s son, Dean, works alongside him in the consulting business. His other son, Tom, plays professionally in Belgium and has been a member of Israel’s under-21 national team. 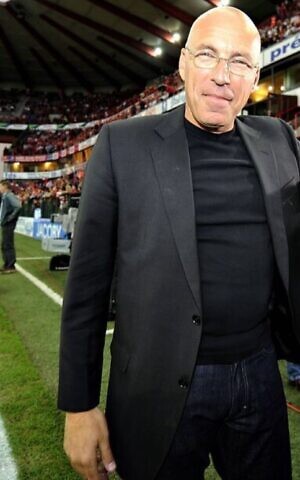 “We stand no chance at producing a player to go to the top level, because the work in the academy level is not good,” he says. “There is money in Israeli football, much more than 20 or 30 years ago. You have unbelievable modern stadiums like in Haifa, Tel Aviv’s Bloomfield, you have in Beersheba.

“But for me, they should invest first in the academy, to produce more players to stand a chance to qualify to a major tournament, which we did not do since 1970,” he says. “You take a player like Eyal Berkovic [who played from 1989 to 2006] or Yossi Benayoun [who played from 1997 to 2019], who were unbelievable talent. If it was today, they would not reach that level because this is not enough for the club. Even my speed at that time, today would not be sufficient to be at a club like Liverpool or Tottenham. We need to produce more athletes and we don’t do it enough.”

As the sport changes with every passing decade, so too do the generations of fans watching. According to Rosenthal, issues such as racism will take time to fix.

“You cannot change it overnight, it takes generations,” Rosenthal says. “So now, for example, in the United States or England, the younger generation is much less racist than the older one.”