As Preston Beckman, a retired network scheduler who presided over the Must-See TV era of NBC and the peak of American Idol at Fox (and now tweets as the Masked Scheduler) put it to me recently, “I would always gauge the start of the fall season by the first episode of Bonanza — which would also be a preview of the Chevy cars that came out in the fall.”

From television’s early days, the broadcast networks had structured their business so that most of their new and returning shows would premiere in the fall. By the Sixties, the practice became codified, starting with ABC debuting the bulk of its 1962-63 schedule in the same week in October. The other networks followed suit, and with one notable exception, “Premiere Week” — a seven-night stretch towards the end of September, usually starting the day after that year’s Emmy telecast, and loaded with high-profile premieres — has been an institution for decades. The entire business of television production was built on a calendar assuming the majority of shows would debut in a tight window in September and October. So many other things about the television business have changed, but Premiere Week has been such a constant that even some non-network shows try to get in on the action. (PBS, for instance, tends to premiere its big Ken Burns projects either during or right after Premiere Week.)

The practice of launching several dozen shows within the same week or two long seemed like madness to me. The counterargument I always heard from network TV executives was that Premiere Week itself was a draw: Viewers were conditioned to think of that period as a time to check out lots of TV shows, and were excited to do so. As cable and streaming series have grown more ubiquitous — premiering on a year-round calendar, rather than clustered at the same time — that argument has felt more and more antiquated, but the broadcasters (at this point, ABC, CBS, Fox, NBC, and the CW) stuck with it because, well, that’s the way they’d always done things.

This year, due to the Covid-19 pandemic and the production shutdown that followed, will offer a Premiere Week unlike only one other in my lifetime.

TV has been able to weather the quarantine simply because there was so much stockpiled programming that had been filmed before March. Most of that, though, has tended to be on cable and streaming, where shows are as a rule produced far in advance. The broadcast networks, though, make most of their shows relatively close to air. That’s why a lot of old favorites like Grey’s Anatomy and Supernatural had their previous seasons cut short in the spring. And it’s why most of them, not to mention all the new shows traditionally launched around this time, won’t be ready for at least a while longer, even though some shows have finally been able to resume production over the last few weeks(*).

(*) Supernatural was actually on the verge of finishing up its remarkable 15-season run when the quarantine began. The cast and crew were recently able to return to Vancouver to complete filming, and that final season will start airing again in early October.

So what kinds of shows should we expect on the broadcasters starting tonight? They tend to fall into these three categories:

1) Reality TV. While more elaborately produced shows like Survivor and The Amazing Race are still on hold, a number of unscripted series have been able to return through some combination of social distancing or quarantining. Tonight alone, NBC has more American Ninja Warrior, while CBS is continuing to lean heavily on Love Island.

2) Imports and leftovers. In the late Nineties, NBC tried to rebrand its annual slate of summer reruns with the slogan, “If you haven’t seen it, it’s new to you!” That philosophy now applies to any scripted show you see on the broadcasters over the next few weeks. In some cases, this involves the time-honored tradition of passing off Canadian shows — like NBC’s perfectly competent hospital drama Transplant — as their own. Mostly, though, the “new” shows over the next few weeks are ones that already aired on places most network viewers do not watch, or haven’t even heard of. Did you know, for instance, that Spectrum Cable has for the last two years been the home of a Bad Boys spinoff called L.A.’s Finest, starring Gabrielle Union and Jessica Alba? Fox is betting that you don’t, which is why first-season repeats of that show will be leading off Fox’s Monday schedule starting tonight. Later in the evening, CBS has its own recycled Spectrum show: Manhunt: Deadly Games, a true crime miniseries starring Cameron Bitton from Mindhunter (always with the hunting, this guy) as 1996 Olympic bombing hero/suspect Richard Jewell(*). CBS will also be airing some One Day at a Time episodes from sister cable channel Pop, while the CW is borrowing episodes of recently canceled, already forgotten shows from less popular streaming services, like Swamp Thing (from DC Universe) and Tell Me a Story (from CBS All Access).

(*) While the networks are busy treating Spectrum as their farm system, it’s a bit surprising, or at least sad, that NBC under these extraordinary circumstances won’t be airing the Mad About You revival that Spectrum premiered in 2019.

Technically, there will be a couple of new-ish shows on Fox this week: Filthy Rich, a soap opera starring Kim Cattrall and Gerald McRaney as heads of a televangelism empire; and Next, a thriller with John Slattery as a tech mogul who believes his old company’s artificial intelligence project is killing people. But both of those were ordered a year and a half ago, and were meant to air last season; that they were still sitting on a shelf, ready to be dusted off for a cataclysmic situation like this, should tell you most of what you need to know. 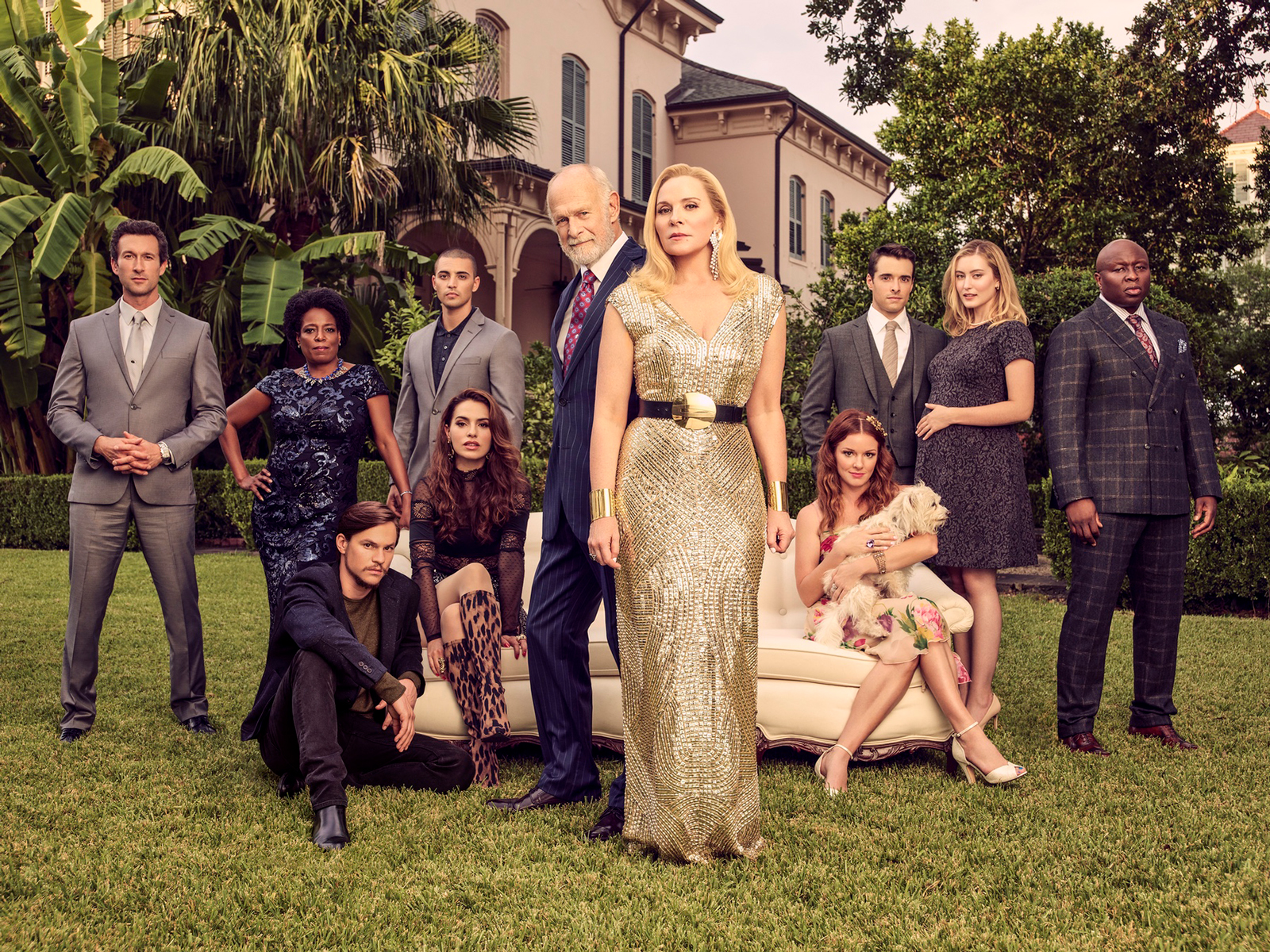 3) Repeats. Because if you haven’t seen it… well, you know.

The broadcast shows that have been able to go back to work in theory will have new episodes in a couple of months. Law & Order: SVU, for instance, began filming again last week. They will be taking 10 days to film each episode, rather than the usual eight, to accommodate new filming regulations, so the show is scheduled to air its season premiere on November 12th. A number of other high-profile shows like This Is Us are planned to be back around the same time.

In that respect, this fall season won’t be that different from the last time Premiere Week was so thoroughly disrupted. Back in 1988, a Writers Guild of America stretched into the summer, endangering the usual fall premiere routine. The networks began threatening to bring back old shows, and even reuse old scripts, to prove they could get by without the WGA, though the only one that made it to air was a Mission: Impossible revival with Peter Graves and a new cast. And even that only wound up recycling a handful of old scripts, because the strike was settled in time for most of the big shows to premiere in late October or early November.

The broadcast nets went back to business as usual after that 1988 disruption of Premiere Week. Of course, at that point, they were essentially the only game in town. That’s no longer the case. The broadcast business model is under siege from all corners. It’s not just that their ratings are way down, as many viewers look elsewhere first for their programming options, but that viewers below a certain age are barely aware, if at all, that the broadcasters exist, and think of something like the CW’s Riverdale as that show they watch on Netflix. Premiere Week, while outdated, at least remained a noisy enough event to cut through a bit of the social media clutter every September. That obviously won’t be happening this week, and what broadcast premieres we manage to get before 2021 will be too scattered to generate a similar level of hype.

As Covid casualties go, the 2020 Premiere Week is an incredibly minor one. Lately, it’s rare to find even one or two fall broadcast shows to get excited about in a given year, let alone find a season like the remarkable fall of 2004, when Lost, Desperate Housewives, and Veronica Mars all debuted within days of one another (and House and Grey’s Anatomy followed over the next few months). Considering all the other tumult in the industry right now, it’s not hard to imagine the people steering these big, old ships taking this opportunity to rethink whether Premiere Week, and the other aspects of the production calendar that were inspired by it, still make sense, if and when the world returns to something resembling normal. Chevy has other ways these days to market its fall line, after all.