The AUD/USD pair is heading into the weekly close trading just below the 0.7300 level, trimming early losses but lacking follow-through. The pair bottomed on Wednesday at 0.7191, as the greenback found strength in a risk-off sentiment,  later bouncing in the aftermath of the ECB’s decision, which brought some relief to equities’ markets.

The Australian macroeconomic calendar was scarce, and data coming from the country were mixed, failing to provide support to the Aussie. Meanwhile, tensions elsewhere and central bankers highlighting the persistent uncertainty capped the interest on the pair.

Tensions with China and COVID-19

On some positive news, the country seems to have curved the latest coronavirus outbreak, with less than 100 new cases per day reported this week. However, the quarantine around Victoria continues, and the latest road-map out of the current lockdown which extends into November, depending on the number of active cases. Victoria has roughly 25% of the country’s population and is responsible for 23% of the country’s GDP. The longer the lockdown, the largest the harm to the country’s growth.

Gold prices, in the meantime, are set to finish the week little changed, with spot trading around $1,950 a troy ounce, failing to provide clues to AUD/USD trades.

Australia released these days the September Consumer Inflation Expectations, which decreased to 3.1% from 3.3% in the previous month. It also unveiled Westpac Consumer Confidence that recovered from -9.5% to 18%. The NAB’s Business Confidence also improved, from -14 to -8, although NAB’s Business Conditions deteriorated from 0 to -6.

Next Tuesday, the RBA will publish the Minutes of its latest Meeting and may provide additional clues on whatever policymakers are planning with an extended lockdown in the largest state of the country. Next Thursday, Australia will publish  August employment data. The country is expected to have added just 40K new jobs in the month, while the unemployment rate is expected to jump to 7.8%. China will publish next Tuesday, August Industrial Production, and Retail Sales for the same month.

The Aussie bullish momentum receded, but the pair is far from indicating an upcoming decline, at least in the longer term. The weekly chart shows that it has advanced above a flat 200 SMA for the first time since March 2018. The 20 SMA is crossing above the 100 SMA, both below the larger one, indicating that bulls retain control of the pair. The Momentum indicator heads firmly lower within positive levels, rather reflecting the absence of follow-through that suggesting a slide. The RSI indicator, in the meantime, consolidates around 66.

In the daily chart, the pair presents a neutral-to-bullish bias, as it has spent the week hovering around a mildly bullish 20 DMA, while the larger ones stand far below this last. Technical indicators in the meantime, stand within positive levels but lack directional strength. 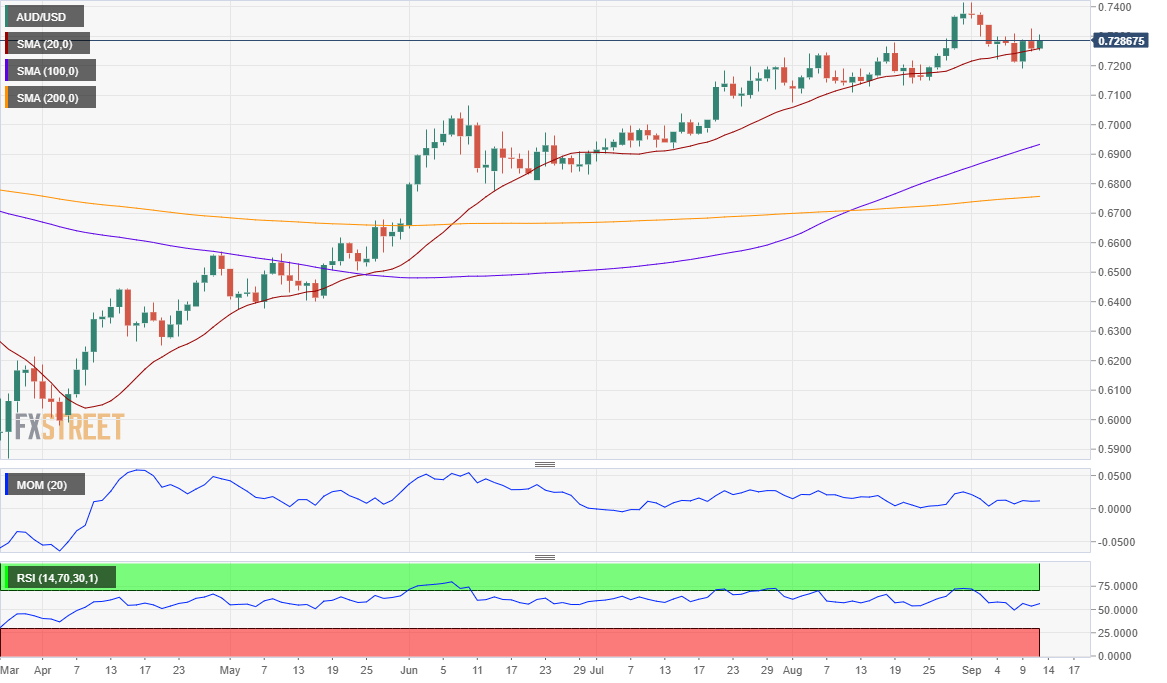 According to the FXStreet Forecast Poll, the Aussie will come under selling pressure next week, as 70% of the polled experts are betting for lower targets. However, the pair is seen holding above the 0.7000 threshold. Bears retain control in the monthly and quarterly perspectives, although in both cases they represent less than the 50% of the polled experts. On average, the pair is seen holding well above 0.7100.

The Overview chart shows that the weekly moving average heads firmly south, although the longer-term positive momentum prevails in the wider perspectives. The range of possible targets has somehow shrunk, which skews the risk to the upside.