The Bank of Canada today maintained its target for the overnight rate at the effective lower bound of ¼ percent. The Bank Rate is correspondingly ½ percent and the deposit rate is ¼ percent. The Bank is also continuing its quantitative easing (QE) program, with large-scale asset purchases of at least $5 billion per week of Government of Canada bonds.

Here is how the bank described the current state of the Canadian economy (emphasis added):

Household spending rebounded sharply over the summer, with stronger-than-expected goods consumption and housing activity largely reflecting pent-up demand. There has also been a large but uneven rebound in employment. Exports are recovering in response to strengthening foreign demand, but are still well below pre-pandemic levels. Business confidence and investment remain subdued. While recent data during the reopening phase is encouraging, the Bank continues to expect the recuperation phase to be slow and choppy as the economy copes with ongoing uncertainty and structural challenges.

CPI inflation is close to zero, with downward pressure from energy prices and travel services, and is expected to remain well below target in the near term. Measures of core inflation are between 1.3 percent and 1.9 percent, reflecting the large degree of economic slack, with the core measure most influenced by services prices showing the weakest growth.

Here is the relevant coincidental data: 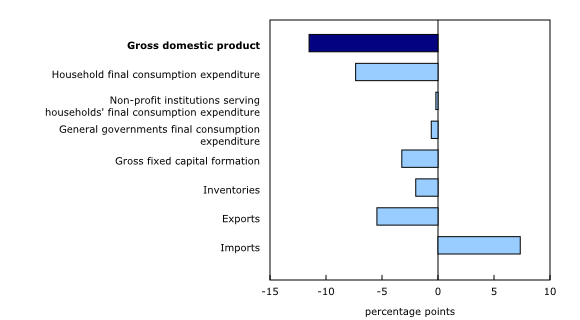 Let’s tie this together with the Canadian ETF:

The Canadian market has been rallying since mid-March and is now just shy of the yearly-high. But prices broke trend during the last week and have retreated to the 50-day EMA.

The interest rate on the main refinancing operations and the interest rates on the marginal lending facility and the deposit facility will remain unchanged at 0.00%, 0.25% and -0.50% respectively. The Governing Council expects the key ECB interest rates to remain at their present or lower levels until it has seen the inflation outlook robustly converge to a level sufficiently close to, but below, 2% within its projection horizon, and such convergence has been consistently reflected in underlying inflation dynamics.

Notice the strength of the forward guidance; the ECB will keep rates until inflation “robustly” converges. Robust is a very strong adjective, almost implying a surge in price pressure. Compare that word to this chart of ECB harmonized core inflation for the last 10 years:

Prices only came close to 2% once and that was in mid2012. Since then, price pressures have been very weak — the antithesis of robust. While all central banks will want some room to maneuver on policy in case the fundamentals change, it’s highly doubtful that the above chart would warrant any change on the part of the ECB. Assuming that analysis is correct, consider this graph from the latest ECB inflation projections:

If the inflation scenario unfolds as projected, rates will be at current rates for several years. 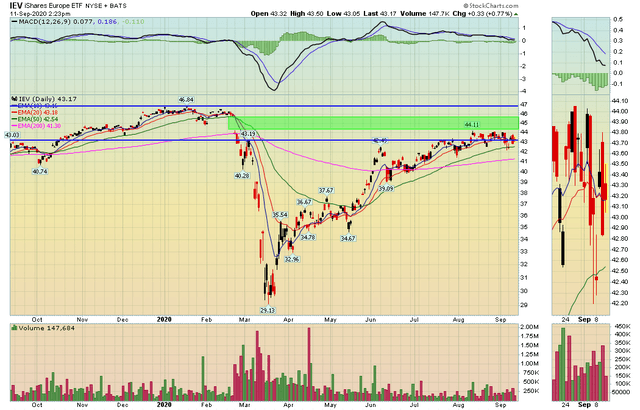 After rebounding from the pandemic, prices are consolidating around the 43 price level — are high from early March.

Next week, the Fed, Japan, Brazil, and the UK issue decisions.