This Market takes a lickin’ but still keeps tickin’

Old hands will tell you that September is the worst month of the year for stocks. Usually August also is a down month as well. Instead the market surprised us by going significantly up strongly in August. We paid the price in September as markets in September fell, Dow -2.28% S&P -3,92% Nasdaq -5.16%. Even so, the third quarter ended up positively – Dow 7.62% S&P 8.47% Nasdaq 11.02%. In fact even with this week’s hard selling at the end, it was still positive for the week.

If you were pressing your luck and pushing risk you probably didn’t notice how well the market has held up. I can’t give you an iron-clad reasoning as to why the stock market indexes are performing so well. Commentators have set about to blame the Robinhood traders and comparing this market to the bubblicious dates of the late 1990s. I heartily disagree. Are there inflated areas of the market? Sure of course, but there always are certain sectors that have bubbly valuations. Some actually end up being justified, others not so much. SPACs are looking to be hiding some rotten eggs, and my next piece will address that. As far as this market is concerned, this market is telling us something that’s contrary to what the commentators are telling us. It’s telling us that a powerful economic uptrend is happening, and that the V-shaped recovery in stocks at least is intact. This good news is at least true for public companies. My heart hurts for Main Street, which will not be so lucky. I hope our leaders create a “Marshall Plan” for small businesses. Since trading is our purview, let’s put that aside and continue with the analysis.

Despite all the negativity the market is holding up, there’s a larger message in that.

This past week, the market had every reason to retreat even harder than it did.There’s news that President Trump and the first lady have caught COVID-19, along with a significant fraction of the GOP Senate leadership. Even with the news that there seems to be a rapprochement between Pelosi and Mnuchin. The beginning this week it was widely accepted that the fiscal deal was kaput and the market really didn’t react. Yet even at the end of the week, the market really didn’t sell off. We also can throw in that disaster of a debate as well, and punk employment numbers (though not at all as bad as advertised). The market held up fairly decently. As I will show in the charts, contrary to accepted wisdom, the rally is still very healthy. Another clue is the VIX. It closed out the week at 27.63 – an elevated level but nowhere near the 35 level of the slam we had the first days of September. Ask yourselves why didn’t we fall 4%-5% this week? I believe the market is sniffing out a fantastic earnings season coming.. As I said, there are still difficulties for existing small businesses, but on the other hand there’s a wave of new business formation which I referenced in my last piece. I believe this is an unheralded piece of news, and it’s a shame, because if the media would pick up on it, more people would be thinking of starting a new business. At the beginning of a recovery it’s the best time to start a business. Anyway we are about trading so let’s go to the charts and see what our trading plan for the week will be.

Price is truth, and the truth is, the charts are telling me there’s still some upside to the market. That said, the plan is to slowly reduce risk the first few weeks of October, and I’m sticking to that plan. Let’s start with the six months chart of the Nasdaq-100 (QQQ). QQQ is the ETF that represents it (here). 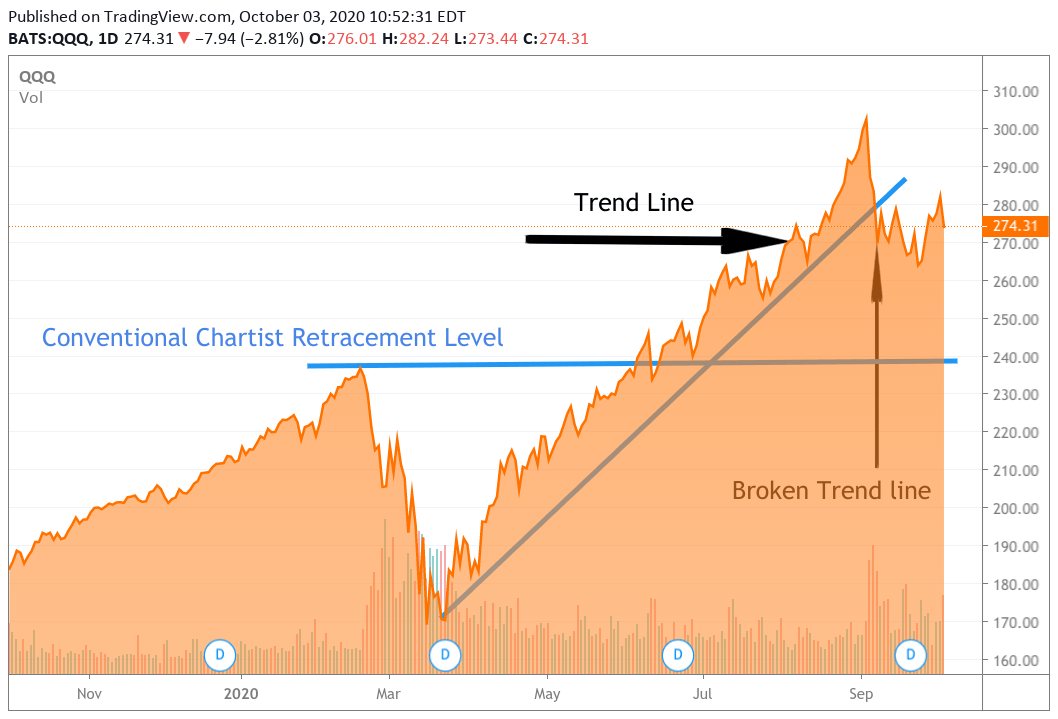 We broke the trend line in the first week of September and this is why many technical chartists are calling for a precipitous drop. So far that isn’t happening, and as long as there isn’t another “Black Swan” event, I think we hold a trading range and correct over time instead of down. At some point, perhaps soon, we will close the year making new highs. I know many of you will scoff, we’ll see…

Let’s pull back for further detail. This is the one month chart (here). 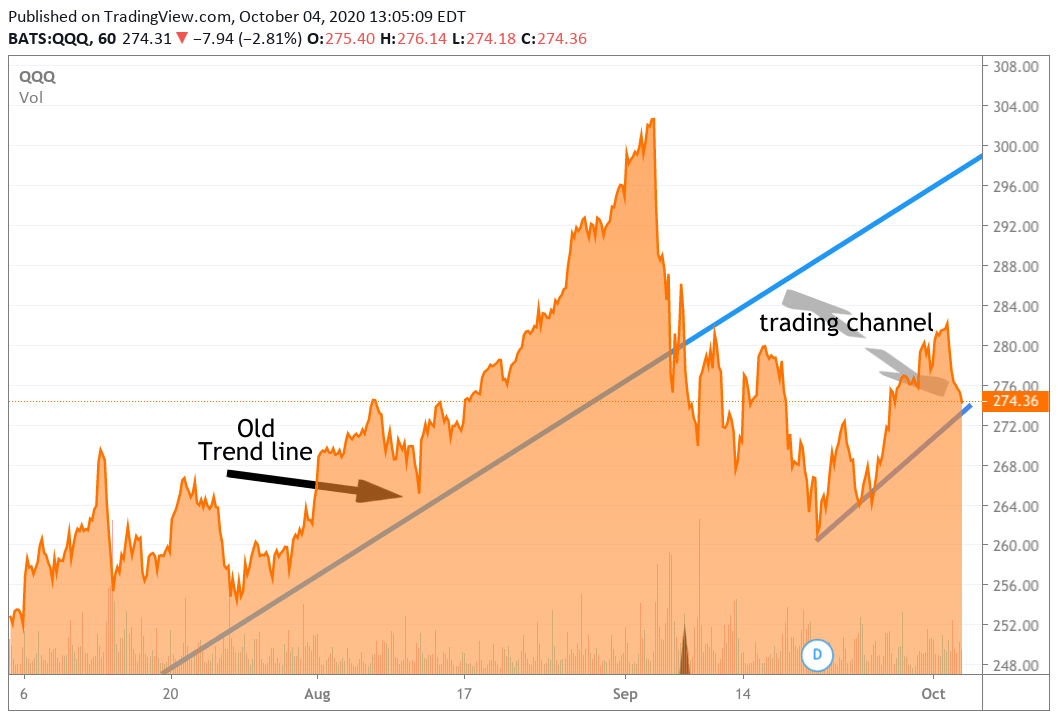 The above chart has two diagonal lines. The top line is the same long standing trend line that we followed since the big sell off and broke last month. A general rule of technical trading analysis is that prior support becomes resistance. So my thesis is that this line is now going to offer resistance to new highs. The lower diagonal is the new trend line. The activity between these two lines is what is known as a trading channel. Trading should be most active within this channel. What I want to illustrate here is that you should lighten up your risk as we approach the old trend line, and deepen your risk as we approach the new trend line which should offer support. I’m using the QQQ as the ETF for the Nasdaq-100. The chart for the S&P 500, the standard the pros follow most, is very similar.

I have just laid out a map for your trading plan this week. Earnings season is starting the week after next. Be mindful of what stocks you take positions in when they report. Normally, I don’t like riding a trade into earnings, however this time might be an exception, especially at the beginning of earnings season.

The IPO names that are on my radar right now

I don’t have positions in these names yet but if they continue to fall these recent IPOs could be very interesting: GoodRX (GDRX) broke under 50 on Friday, it originally opened for trading at 44. I would start accumulating GDRX as it gets to that level and even lower. It’s in the sweet spot of DTC, Direct-to-Consumer, and it’s a cloud-based service so it can really scale. It’s a buy at the right price. I have an eye on Snowflake (SNOW) but I want to see it significantly under 200. Some of you may scoff, but I think it’s possible. Other new high-flying names have taken big drops in the first few months of being a public company, especially on their first earnings report. SNOW is changing how enterprise is managing data, and I think it will do as well as Mongo (MDB) as a stock has done. You just need to have patience and wait for the price to come to you.

I want to give honorable mention to JFrog (FROG), I think it’s a very interesting devops company that’s attacking a very difficult area of cloud software. I’m not going to go into the details, if you understand tech look into it. What I will say is that FROG opened for trading at 60, and that’s where I will start thinking about getting into it. I think that a Cloud provider should acquire this company, OK I’ll just say it, Alphabet (GOOGL) (NASDAQ:GOOG) Google Cloud should just buy it, or if Oracle (ORCL) really wants to be relevant they should buy them. Honorable mention also goes to ASANA (ASAN). It is very interesting as well, and I suspect that it will break it’s opening price. I would wait for it’s earnings report and look to speculate on it then. This is another company that’s changing enterprise project management. I would group them with Slack (WORK), and Atlassian (TEAM). They were a direct listing, not an IPO, and the iBanks have no reason to support it. In fact I bet they want to see all direct listings to do badly since they make so much money on IPOs.

What I’m already trading: I’m trading Big Commerce (BIGC), in equity and call spreads. If it breaks above 89.80 and closes above that level, I think it’s going to 100, and maybe higher. I’m in Palantir (PLTR). I may have gotten in too early, so you might not want to follow me right away in this one. I hate when traders always just talk about their successful trades. I’m down hard right now, my intention was to hold this more as what I call a speculation, going into next January/February, if it breaks below 9 I’m going to cut my losses and look for a lower entry point. Why do I want to stick with this name? I think the financial media just reacted to the debut, which had some technical difficulty. After that it was easy to throw shade. Also, they left Silicon Valley in a huff, with a very public reprimand about the culture there. Financial media that wants to report on technology can’t risk looking like they agree with PLTR and be too supportive of it.

Also because it wasn’t an IPO (another direct listing) the iBanks didn’t support it either. My thought is that Palantir Metropolis, their commercial product, is relatively new, and it will surprise Wall Street with its growth. We know that the enterprise class is drowning in data. I think PLTR has what it takes to take share in big data analysis. It’s a buy. I may actually put it in my long-term investment account, even though my rule is only to invest in dividend bearing stocks. Good luck!

Disclosure: I am/we are long BIGC. I wrote this article myself, and it expresses my own opinions. I am not receiving compensation for it (other than from Seeking Alpha). I have no business relationship with any company whose stock is mentioned in this article.

Additional disclosure: I am long BIGC in in Call spreads and stocks, I am long PLTR in equity, I am looking to get into GDRX, SNOW, FROG, and ASAN at the right price