Darvoz, in Tajikistan, is a province of dusky canyons and snowy peaks, villages perched across the river from Afghanistan. Terraces turn brilliant shades of green in summer with water channeled from above. Far from Dushanbe in hours and attitudes, Darvoz is crossed by roads of varying quality where trucks rumble through to and from China.

Readers of official Chinese news now know Darvoz as an economic miracle that, thanks to Chinese technology and Beijing’s Belt and Road Initiative, promises Tajikistan a prosperous future.

Or so says a long-time Tajik envoy to Beijing given a platform in the Communist Party of China’s mouthpiece.

Rashid Alimov’s effervescent August 21 op-ed in People’s Daily describes a vision of the future – a future that the Belt and Road has brought to Tajikistan: the Darvoz Industrial and Innovative Technological Park.

Darvoz, the former Tajik foreign minister writes, is a key node on the “China-Tajikistan friendship highway.” With the “most advanced automation equipment made in China,” the Darvoz park can produce drinking water and honey for export, limestone for the Tajik cement market, and tomatoes year-round. And the timing couldn’t be better. Chinese machines can yield 10 tons of disinfectant a day and 2,000 pieces of PPE per hour.

Unusually, no Chinese companies are taking credit for the project. That lends support to the local chatter: that it is being funded by Talco, Tajikistan’s largest factory, an aluminum smelter that appears to enrich the president’s family. Indeed, a man strongly resembling the elusive Talco director, Sherali Kabirov, appears in photos with President Emomali Rahmon at the facility’s grand opening on August 19. 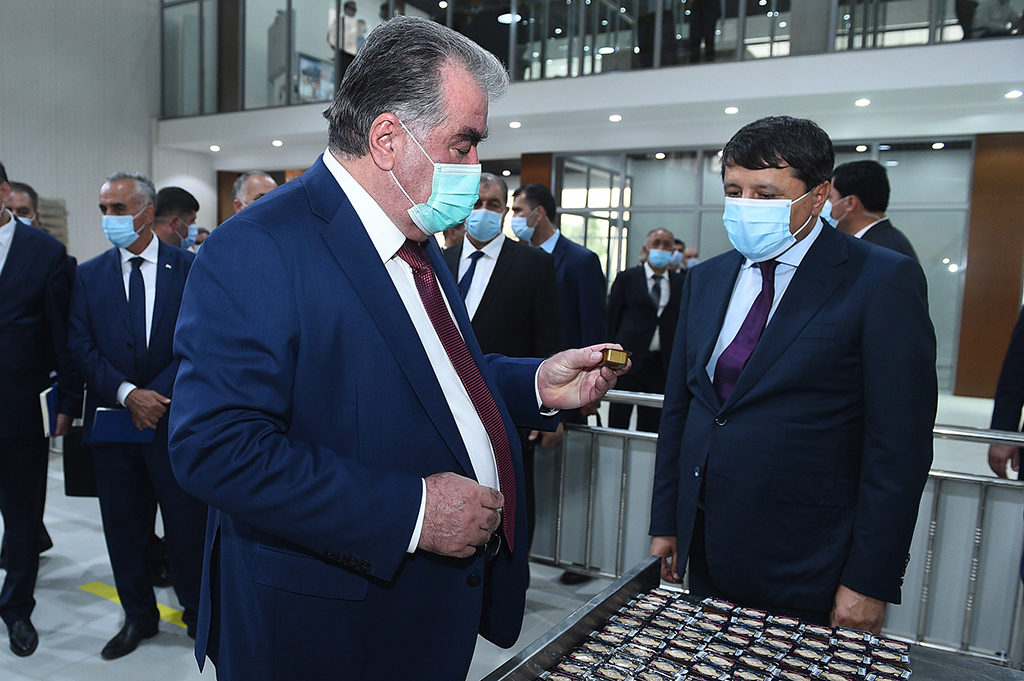 Anyone familiar with how loss-making Talco spends money knows the company is not a harbinger of economic transformation.

Yet Alimov likens the project to the Shenzhen Special Economic Zone near Hong Kong that kickstarted the Chinese economic miracle of the last few decades. And he is not shy with praise for Chinese knowhow: “What is striking is that the design and construction of the Darvoz Innovation and Technology Park fully draws on China’s experience in developing technology parks.”

Alimov didn’t mention a nearby border guard facility, which the president also toured during his visit to the region, and which also has ties to China.

Arranged inside for the commander-in-chief sat neat rows of new Chinese-made armored vehicles, including the Dajiang CS/VN3 and Dongfeng EQ2050 – machines designed for dispersing crowds and roadblocks, less an obvious choice for scrambling up mountainsides chasing the ghost-like holy warriors Rahmon constantly warns are plotting to cross the river. In his public comments Rahmon didn’t say who had renovated the facility, but in 2016 his government said China would build 11 border guard posts in such places. 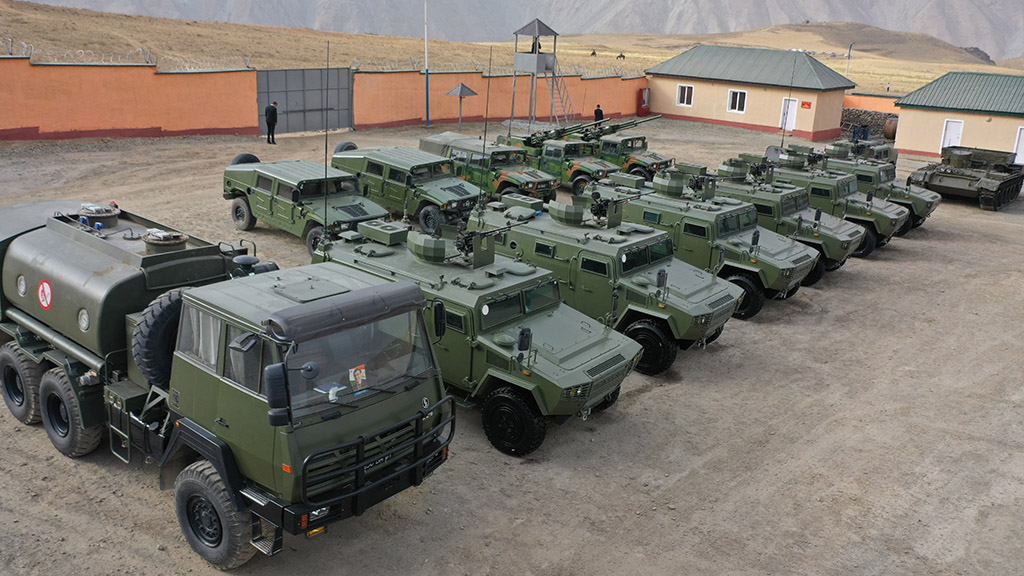 That Tajikistan is spending its own money on job-creating industry can only be celebrated, if indeed those jobs materialize. The country has lately spent a lot of Chinese money. And despite Dushanbe’s recent request for forbearance, Beijing has signaled it is not in a forgetting mood.

If in recent months Chinese workers had been trickling back to Central Asia, now they are arriving by the charter-planeload, finding local authorities eager to get a jumpstart on normality. Many of the laborers and specialists are returning for the first time since departing in January ahead of the Chinese New Year, only to be stuck at home when the pandemic struck.

Two days later, Beijing-based China Nonferrous Metal Mining sent 42 workers from Wuhan to the Pakrut gold mine northeast of Dushanbe. They can rest assured they are not landing in a viral hotspot: In March, 366 Tajik employees at the facility signed a pledge to stay away from mosques and other crowded places.

Kyrgyzstan welcomed a flight from Chengdu on August 4, which was carrying 126 Chinese workers, including some for state-owned China Gold, CNPC and Power China. They return to a number of projects that have been on hold, including an irrigation upgrade in Issyk-Kul province and production at the long-troubled Junda oil refinery in Kara-Balta.

A group of 19 workers with China Railway 20th Bureau Group Company arrived in Uzbekistan on August 13, brought back to resume repairing the highway from Nukus to Qarshi.

Kazakhstan is the only Central Asian country that didn’t see trade turnover with China take a massive tumble in the first half of 2020. Trade between the two was down a mere 1.5 percent year-on-year. By comparison, Chinese customs data show trade with Kyrgyzstan down 52.8 percent; Tajikistan 34.4 percent; Turkmenistan 24.7 percent; and Uzbekistan 22.2 percent.

The growth has been led by agricultural goods after Beijing determined that Kazakh produce meets its food safety import requirements, a process that picked up momentum in early 2019 and has proven a boon to Nur-Sultan’s diversification efforts.

In August, for the first time Chinese buyers transferred a down payment to Kazir Agro for raw safflower oil ahead of delivery, an arrangement that a Kazakh exporter sees as a sign of growing trust. “As a rule, our foreign partners, especially China, have some reservations about [prepayments]. It’s a risk for them, Where’s the guarantee that the Kazakh producer will fulfill its obligations?” Sergei Salmanov, a Kazakh trade representative based in Xi’an, told Kazakh media.

On August 8, the General Administration of Customs in Beijing allowed 78 more Kazakh companies to export flaxseeds to China, bringing the total to 103 companies, the embassy in Nur-Sultan announced.

Kazakhstan’s pig farmers are looking for approval, too. An outbreak of African swine fever has nearly halved China’s porcine stocks since 2018, pushing demand and prices to record highs. On August 5, Kazakhstan’s leading breeders discussed plans to start sending more pork to China, after Kazakhstan was declared swine fever-free in May.

On August 25, Shenzhen-based China General Nuclear Power Group (CGN Mining) announced it is working on a deal with Kazatomprom to purchase the Mynkuduk and Zhalpak uranium mines in South Kazakhstan province. The two companies together operate the Semizbay-U and Irkol uranium mines.

The trade data may have been disappointing elsewhere in Central Asia, but business continues nonetheless.

Forty-two 40-foot rail containers of polypropylene resin (used for making inexpensive, rigid plastics) left Turkmenbashi for Qingdao on the Chinese coast on August 20, reported Business Turkmenistan, the first time such a consignment was sent by rail.

Though Russian gas producer Lukoil announced in late August that it had stopped exporting Uzbek gas to China due to weak demand, Uzbekistan continues to be the focus of a constant drumbeat of Chinese investment. To take one example in August, workers in the Kokand free economic zone broke ground on a factory to assemble Chinese-made electric vehicles. Toward the $30-million tab Chinese investors are contributing $24 million. The Podrobno.uz news agency quoted a Russian blogger likening the vehicles’ appearance to a Mercedes Benz. But other than the logo – an upside-down three-pointed star – few will see the resemblance.