The U.S energy sector has had an abysmal year with relatively poor performance since January. However, there is one particular segment of the sector which has seen stellar returns over the summer: coal.

Coal mining stocks have struggled over the past decade due to a decline in the price of coal. Other bearish factors for these companies include divestment among many institutions which has led to extremely low valuations and high yields for many producers. However, coal’s prospects have improved since April as you can see in the (KOL) ETF below:

Despite the strong performance in recent months, KOL still has an extremely low weighted-average “P/E” of 7.5X and a weighted-average price-to-book ratio of 0.67X. The fund also has a very solid TTM dividend yield of 13%.

The recent rise in coal mining stocks is attributable to an increase in coal’s price as you can see below: 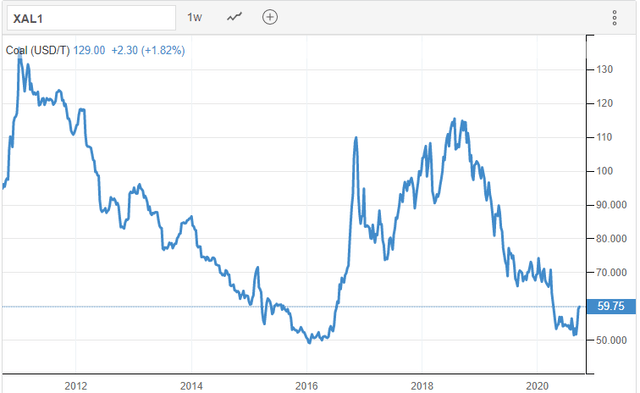 Fundamentally, this is due to a rise in natural gas prices over summer which increased the value of coal. China has also been struggling with a growing shortage of coal which has opened the possibility of allowing for greater U.S exports to China. This is important because U.S consumption of coal is on a long-term decline. It makes up a considerable portion of U.S electrical production, but coal companies will be increasingly reliant on exports in the future so this news from China is bullish. Even so, natural gas’s ability to threaten coal demand is fading with NG production hitting a potential peak.

No doubt, coal prices remain low from a long-term perspective. However, coal found resistance at its early 2016 lows and is now bouncing up as it had into 2017. This period saw KOL rise a staggering 230% from its 2016 low to its 2018 peak. If history repeats, coal mining stocks could be headed for another wave of triple-digit performance.

While KOL is fine, investors can do perhaps much better by looking at the most undervalued individual companies which have a superior financial and operational position. Here are a few of my favorites.

Arch resources (ARCH) has been on fire over the past few weeks and has been the major performer in the ETF KOL. Arch is a leading producer of metallurgical coal which is used in creating steel. This gives Arch greater stability and less exposure to the energy sector and regulations. Arch operates among the lowest-cost metallurgical coal mines in the U.S as well as a few low-cost thermal coal mines.

While thermal coal prices have had a small bounce (see above), metallurgical coal has seen a much stronger bounce due to an increase in demand from China. China is the world’s dominant steel producer and the trade-conflict between the U.S and China led to a drop in Chinese imports of metallurgical coal. However, the growing premium on coking coal prices indicates that demand from China may be returning to normal.

This has led ARCH’s stock price to return toward its 2018-2019 levels as you can see below:

It is very possible that ARCH has a short-term pullback soon due to volatility across equity markets. However, it has strong fundamentals tied to the growing demand for steel. I’ll be looking to buy the pull-back.

CONSOL Energy (CEIX) is one of the leading producers of thermal coal in the U.S. The company has been in business since 1864 and has the capacity to produce 28.5M tons of coal per year billions of tons in reserves.

Like most other coal producers, CEIX was hit hard by COVID and saw a significant decline in Q2 coal demand with a 69% decline in sales. This has caused many to question CONSOL’s ability to survive the crisis. That said, the company generates material revenue from exports and operates one of the country’s most efficient mines. CEIX has a bit of debt at $700M, but none is due until 2023, giving the company time to recover.

CEIX is extremely cheap given coal prices and sales volumes return to normal (or ‘near-normal’). Its TTM Price-to-cash-flow is only 1.1X which is extremely low and its stock price is supported at the $4 level:

Overall, Consol is in a difficult position, but if the company can survive in the short-run I believe it will thrive in the long-run.

Alliance Resource Partners (ARLP) currently holds the highest Quant rating among coal producers on Seeking Alpha. The $400M company currently trades at an extremely low forward “EV/EBITDA” of 3.6X and a TTM price-to-cash flow of roughly 1X as you can see below:

ARLP’s cash-flow this year will likely be lower than its TTM level due to a decline in sales from COVID. The company is the second-largest coal producer in the eastern United States. ARLP’s dividend is currently suspended in order to maintain liquidity in the current environment. That said if its dividend returns to normal then it would have a forward yield of around 60%. Of course, its dividend will likely not return to normal for quite some time, but it still has the potential to pay extremely high returns.

With total liabilities to assets of around 55% and coal prices back on the rise I believe it is likely the company makes a recovery. If so, I suspect ARLP’s price will rise tremendously, perhaps back to 2019 levels which were 250-500% higher than they are today. I am currently long ARLP.

The Bottom Line: Coal is Here to Stay

Overall, metallurgical coal stocks such as ARCH are in a generally safer position today than thermal coal miners like CEIX and ARLP. However, CEIX and ARLP have extremely low valuations, giving them extreme upside potential as long as thermal coal prices and demand continue to rebound. Perhaps the best bet today is diversified exposure between both.

Of course, there is the long-term issue of the secular decline in coal. For many analysts, it is almost a given that the U.S will stop consuming coal in the future. Today coal is about 24% of total U.S energy production, while natural gas is 38% and nuclear 20%. Many believe renewables will absorb coal demand, but it is worth pointing out that only around 4% of power is produced by non-geographic dependent renewables (excluding hydropower, wind, and geothermal which can only be done in specific locations). Put simply, we are a very long way away from renewables killing the fossil fuel industry.

Nuclear use is also on a moderate decline meaning coal demand is declining due to a rise in natural gas demand. Natural gas is cleaner to burn than coal but requires fracking which is increasingly unpopular among many voters. Coal is also far more abundant than natural gas. Of course, carbon-capture technology can also reduce coal’s carbon output by 90%, though it is currently cost-prohibitive.

This is not to say coal will continue to be subject to intense negative political pressure or that green energy efforts are in vain. Only that, objectively speaking, it appears highly unlikely that coal will permanently disappear from U.S consumption. If anything, the drastic decline in natural gas production and the potential ‘peak shale’ will increase the demand for coal for years to come.

If this expectation proves correct, I firmly believe the three coal stocks mentioned in this article will see a significant upside. The market is very volatile today, so it may be best to wait for a drop to make a position, but their long-term outlook is very strong.

If you’re looking for (much) more research, I run the Conviction Dossier here on Seeking Alpha. The marketplace service provides an array of in-depth portfolios as well as weekly commodity and economic research reports. Additionally, we provide actionable investment and trade ideas designed to give you an edge on the crowd.

As an added benefit, we’re allowing each new member one exclusive pick where they can have us provide in-depth research on any company or ETF they’d like. You can learn about what we can do for you here.

Disclosure: I am/we are long ARLP. I wrote this article myself, and it expresses my own opinions. I am not receiving compensation for it (other than from Seeking Alpha). I have no business relationship with any company whose stock is mentioned in this article.