The coronavirus pandemic has caused toilet paper shortages and long lines, but panic buying is not a new phenomenon and it certainly isn’t helping.

Leslyn Hall says she and her husband plan to stock up on groceries later this month. At the back of her mind are concerns about disruptions in supplies if there’s another COVID-19 surge, as well as potential unrest surrounding the Nov. 3 presidential election.

“We talked about doing a big shop like we’re going into quarantine,” says Hall, 53, of Burlington, Vermont. On the list: enough basics such as milk, beans and rice to last for two to three weeks.

Hall, a consultant, points out that her local grocery stores struggle to keep their shelves fully stocked and have shortages of products like cleaning supplies, even though her state has one of the lowest COVID-19 rates in the U.S.

“Arguably speaking, we have control of things in Vermont, but you still go into the grocery store and there are shelves that are sparse,” she says. 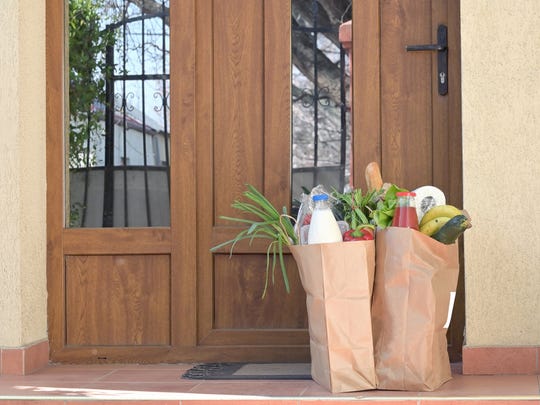 More than half of Americans in a recent poll say they already have or plan to stockpile food and other essentials. (Photo: Getty images)

Where home prices are hurting:How are big cities faring vs. the ‘burbs?

What American wants from a stimulus: Here are the top two things

Hall isn’t alone in her plans to stock up her pantry this fall. Slightly more than half of Americans in a recent poll from Sports and Leisure Research Group say they already have or plan to stockpile food and other essentials. The chief reason: fears of a resurgent pandemic, which could lead to disruptions such as new restrictions on businesses. On Oct. 2, the number of COVID-19 cases in the USA was its highest in almost two months.

“We still see a majority of Americans are concerned that we will see more spikes in COVID, and it’s beginning to rear its head in a number of states,” says Jon Last, president of the Sports and Leisure Research Group. “At the same time, there is COVID fatigue.”

He points to the survey’s findings that while roughly 52% plan to stockpile this fall, about 48% said they aren’t. Of those who are stockpiling, the majority are concerned about an increase in infection rates, but a smaller share of people say they are worried about unrest surrounding the election next month.

Shoppers are unlikely to see the types of shortages experienced in March and April when states enacted stay-at-home orders and grocery shelves were emptied of essentials like toilet paper and flour. Grocery chains are stocking up on supplies ahead of the winter months to ensure they can meet demand as COVID-19 cases increase, as well as the holidays, according to The Wall Street Journal. 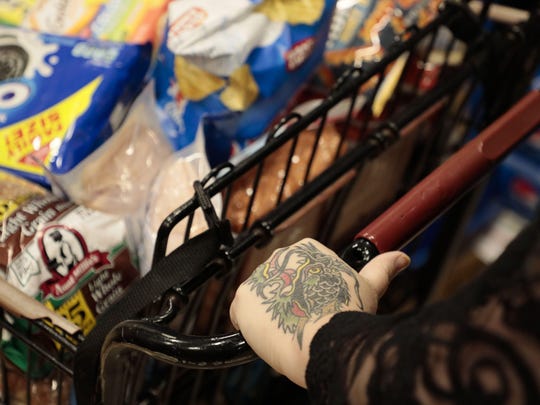 More than half of Americans in a recent survey say they plan to stock up on groceries amid concerns about another COVID-19 surge and possible political unrest. (Photo: Joshua A. Bickel/Dispatch)

Already, there’s some evidence that grocery sales are rising, according to data from industry sources. The typical bill for a trip to the grocery store rose to $72 for the week ended October 6, or 11% higher from the week before, according to data company Envestnet Yodlee.

“That’s the highest we’ve seen since the first week of June and the second-highest since we started tracking this in January,” said Bill Parsons, group president of data and analytics at Evestnet. Grocery spending peaked in April, he notes.

Consumers are increasingly turning to online grocery delivery to fill their pantries, with 17.2% of grocery sales now spent online, an almost 2-percentage-point increase from the start of September, Parsons added. Meanwhile, Instacart says searches for hard-to-find staples during the pandemic are on the upswing again, with a 14% increase in “toilet paper” searches in the past four weeks.

Grocery spending remains elevated partly because of the dynamics of the pandemic, according to Anne-Marie Roerink, principal and founder of 210 Analytics, which tracks grocery sales. Millions of adults and children continue to work or learn from home, which creates more demand for home-prepped meals.

“All of us now have beans in the pantry and some meals ready to make,” she says. “We have learned to buy online and replenish all the time rather than ‘I’m out of everything but condiments.’”

Aimee Picchi is a business journalist whose work appears in publications including USA TODAY, CBS News and Consumer Reports. She spent almost a decade covering tech and media for Bloomberg News. You can find her on Twitter at @aimeepicchi.

Finding toilet paper in a global pandemic is a struggle. Stores shelves are bare. Amazon is wiped out. And hoarding is only partly to blame – as it turns out, toilet paper is part of a very tight supply chain. (April 9)