Global: Equities have been receiving some support in the past two weeks following their bear retracement in September, which has stabilized price volatility (VIX is trading slightly below 30) and therefore generate preference for risk-on assets. Even though it seems that participants rushed to buy the dips in markets as they are confident that the stock market will continue to trend higher in the last quarter of 2020, we are very cautious as there are a lot of uncertainties coming forward, starting with US elections, Brexit and the possibilities of a second lockdown that will dramatically reduce growth expectations. Leading indicators such as global trade is not showing any signs of improvements and the lack of stimulus (both monetary and fiscal in the US) will certainly limit the upside gains in the equity market. We saw that China credit impulse is one of the few liquidity indicators showing a positive sign for risky assets in the coming months; figure 1 shows that the annual growth of Total Social Financing, a broader measure of Chinese credit, has reversed from -20% in the end of 2018 to nearly 40% in August and is currently pricing in more upside in global equities.

US: The recent positive rebound in equities has led to a weaker US dollar against most currencies as risk-on environment favors currencies such as the euro, the pound or the Australian dollar. We are convinced that despite the improvement in employment figures and business surveys (i.e. manufacturing ISM), US fundamentals will start to weaken in the coming months as the lack of stimulus will drag down consumer spending. The 2Y10Y yield curve continues to steepen gradually (trades above 60bps) as the 10Y yield consolidates higher.

Euro: Even though we saw a sharp recovery in leading indicators such as the ZEW survey and the IFO business climate, political risk remains elevated in the Euro area and our aggregate leading indicator is still standing at depressed levels. Even though European banks offer attractive value, the massive rise in non-performing loans combined with the rapid rise in unemployment (currently ‘hidden” by the furlough schemes) could result in another wave of pessimism in the 19-nation bloc.

UK: Government keeps imposing new restrictions ahead of the winter, which will dramatically reduce growth expectations and companies’ earnings in the coming quarters. The pound remains vulnerable in the current environment; even though fair value metrics (i.e. PPP) price in a much higher exchange rate (GBPUSD at around 1.45), sterling has historically been the worst performer when uncertainty and price volatility rise.

Net short specs on US Treasuries have remained steady in the past months, down 39K to 345K contracts in the week ended September 29. It is interesting to see that investors who had been bearish on Treasuries seem to have capitulated as specs have switched net longs on the 10Y, up 114K contracts in the past two weeks (+129K currently). We are still slightly bearish on Treasuries and expect the 10Y to consolidate towards 1-1.25%.

EUR/USD: The euro received strong support in the past two weeks after consolidating by four figures to 1.16 against the dollar and is currently trading slightly below its 50D SMA at 1.18. We remain bullish on the greenback, and we think it is more interesting to trade the euro against crosses such as the British pound or the Swiss franc. 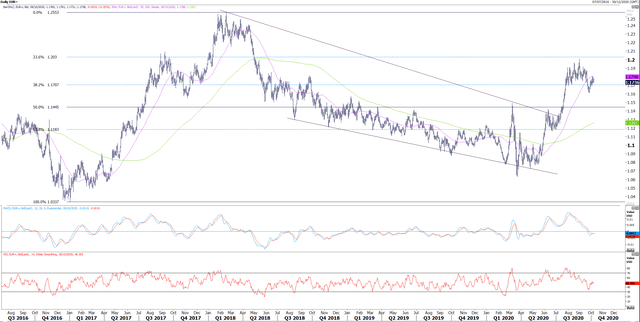 EUR/GBP: The pair has been consolidating lower in the past two weeks as the risk-on environment generated more demand for sterling. We are bullish on the pair as we think that volatility should remain elevated in the coming weeks; we went long at 0.9080 with a first target at 0.9250 and a stop loss at 0.8970. 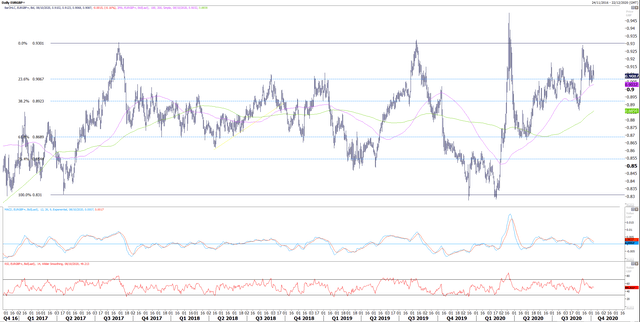 USD/JPY: The long-term momentum on the pair looks clearly bearish; it is interesting to see that USDJPY has failed to break its 100D SMA in the past three months and that each time the pair recovers to that level traders take the opportunity to short it. The yen also tends to perform well when volatility rises, but we are slowly approaching the psychological “100” level, which may lead to more BoJ “jawboning” and interventions in order to prevent the yen from appreciating further.

AUD/JPY: We think it is more interesting to trade the yen against risk-on crosses such as the Aussie, New Zealand dollar or the British pound. AUDJPY has dramatically recovered and currently trades higher than its February levels, therefore we would be cautious in the short term as higher volatility will lead to a stronger yen against the AUD.

USD/CHF: We still like to be short the Swiss franc against the US dollar as we think that the pair currently trades at extremely low levels and could experience a significant rally (i.e. CHF depreciation) if demand for the dollar starts to accelerate in the last quarter of 2020. 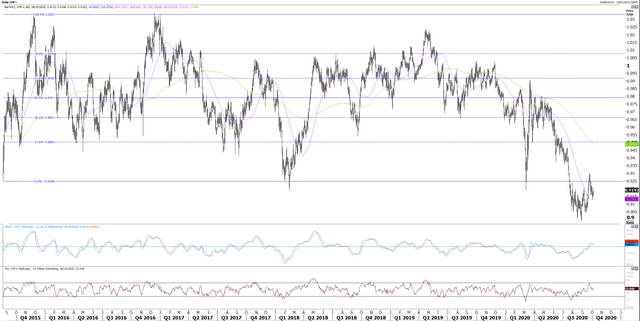 Chart Of The Week

In the past few months, the lockdown followed by the restrictive policies imposed by the US government led to the loss of millions of jobs, especially in the services sectors (i.e. hospitality, entertainment). Permanent job losers surge from 1.3 million in February to 3.8 million in September and is generally a good leading indicator of the Chapter 11 bankruptcies.

Hence, the uncertainty over the economic outlook and inflation has historically led to a yield curve steepening due to the strong increase in the term premium. Even though the Fed may compress the term premium across the whole term structure, the 2Y10Y yield curve could continue to increase towards 1 percent in the current environment. 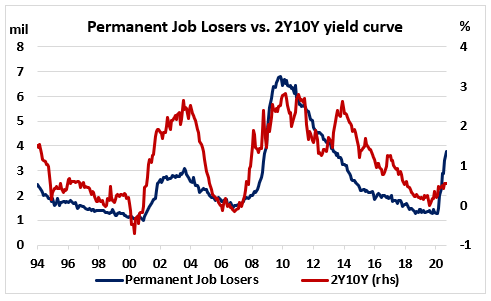 The damage generated by the new restrictions imposed by governments in addition to the uncertainty over US elections and Brexit and the lack of stimulus could weigh on risky assets in the near to medium term. We are still long the US dollar and would avoid risk-on currencies such as the pound or the Aussie.

Disclosure: I am/we are long USDCHF, EURGBP. I wrote this article myself, and it expresses my own opinions. I am not receiving compensation for it (other than from Seeking Alpha). I have no business relationship with any company whose stock is mentioned in this article.