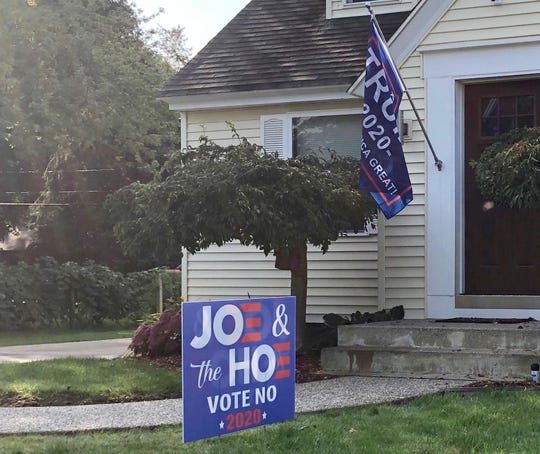 A political sign at the home of a Hudsonville business owner has sparked a controversy after the business responded explicitly to criticism over Facebook. (Photo: Brian Vernellis, Holland Sentinel)

HOLLAND, Mich. — A Hudsonville business has disabled its Facebook page after a profanity-laced exchange with a Holland resident over a political sign that some residents have called offensive.

A photo of the sign, sent to The Sentinel by a Holland resident who did not want to be identified, reads: “JOE & THE HOE VOTE NO 2020,” in a font which mimics the one used by the Biden campaign. “Ho” is a slang term for “whore,” often used with racist connotations. Harris, a woman of color, is of Jamaican and Indian descent.

“I thought it was very offensive,” Drost told The Sentinel. She said the Facebook group linked the sign with Smitty’s Truck Wash.

“Despise your political sign!” Drost wrote. “Hope you lose business because of it.”

Smith’s yard sign was still on display as of Thursday afternoon after the online message exchange.

Smith confirmed he placed the controversial sign in his front yard — situated across the street from a church on Holland’s 32nd Street — but there was no connection between the sign and the business he owns.

The Sentinel was provided screenshots of messages bearing the company’s name and logo, however, Smith claims it wasn’t his company responsible. As of Thursday morning, the business’ page had been disabled.

On Google reviews of the Smitty’s Truck Wash’s services, critical messages dating back as far as one year ago had responses from the owner that included phrases like “must be trying to get points for your Obama phone loser [sic]” and “too bad you are just a hillybilly [sic] with no teeth homi [sic] get a life relly [sic].”

All of those comments were deleted within the past few days.

“I don’t need to make no comment,” he said. “This has nothing to do with my business. You have no proof that this was tied to my Facebook page. I’m not a very nice person when it comes to this stuff. You can make any screenshot you want.”

The sign itself, and similar messaging, has drawn ire in other areas of the country. It’s not available for sale on the official Trump campaign shop, but rather by a third party seller — which claims it has no affiliation to the campaign.