Jack in the Box (JACK) has a simple story. It is a regional hamburger chain that has carved out a distinctive identity based on its innovative indulgent side items, its all day: breakfast, lunch, dinner, and late night menu, its 18/7 and 24/7 hours of operation, and its heavy focus on the drive through experience.

The company that never really evidenced the accelerated growth experienced by its peers except for brief periods in the 1970’s and 1990’s, decided to combat moderating retail sales and shrinking margins by launching a refranchising strategy in 2004. The initiative was completed in 2019 and although margins have expanded significantly over the course of the 15 years it took to enforce the refranchising effort, the effect on gross profits, operating earnings, and net income has been marginal.

To mitigate the sluggish increase in profits and accelerate growth, JACK has implemented wide ranging initiatives to advance same store sales, and has indicated plans to open a large number of new restaurants over the next few years. However, given that the strategies enacted need to succeed (within a reasonable time horizon) for the transformation to be effective, there is significant execution risk associated with the JACK story.

In that regard, it is important to note that based on its current profitability profile, the firm is trading at a discount to its peers on a multiples basis. Therefore, the likelihood of shares depreciating to levels significantly below the current market value is limited. Based on our 5-year Discounted Cash Flow model that takes into consideration earnings from years 2021 through 2025, we arrive at a 1-year Price Target of $113/share and a Speculative Buy Rating for JACK.

JACK is for the most part, a west coast and south west United States focused hamburger chain that had 2,243 restaurants at FYE2019, of which 137 were company-operated and 2,106 were franchisee-operated. In FY2019, JACK generated ~$3.5 billion in retail sales reflecting a growth rate of 1.1% compared to FY2018, same store sales growth of 1.3% over the prior year, ~$950 million in revenues representing a year over year growth of 9%, $3.52 in Earnings Per Share (“EPS”), and ~$168 million in operating cash flows.

The predominant element surrounding the JACK story is whether the company can transform itself into a more profitable larger organization over the next several years. Related ancillary issues include the frazzled relationship between the company and its franchisees, the growing number of franchisee operated stores that are unprofitable, and the contraction in gross margins over the last two years due to: the increase in minimum wage on the west coast, and deep discounting in menu prices by competitive firms.

In regard to whether JACK can successfully transform itself, the turnaround is still in the initial stages, and given the lack of a definitive trend, it is difficult to be certain about the outcome. Although the refranchising effort has resulted in significant margin expansion, with gross margins, operating margins, and profit margins continuing to grow, the initiative has not reflected in substantial increases in gross profit, operating earnings, and net income, due to the deleveraging effect of weaker revenues (as retail sales associated with the large number of stores that have been flipped over to franchisees are no longer recorded as revenues to the company). The solution is to significantly increase retail sales and additional margin expansion. 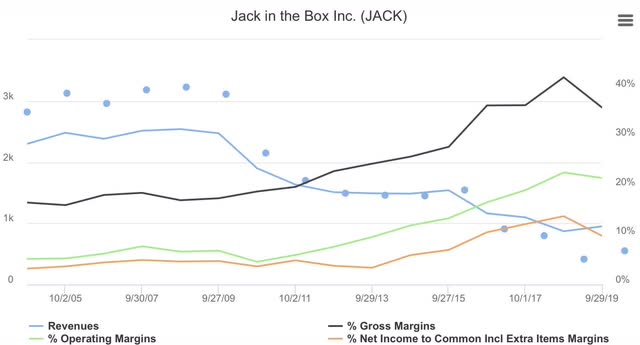 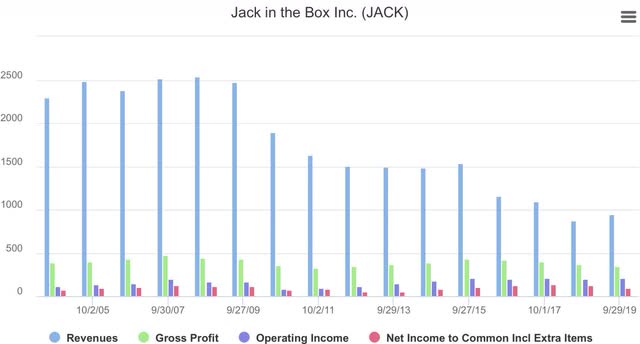 There are two ways for JACK to increase retail sales, first by increasing the average same store sales growth of existing restaurants, and second by opening a large number of new restaurants. To grow same store sales, JACK has to capture and retain customer interest by providing good quality great tasting food at price points that represent great value for money. In addition, the company has to offer excellent customer service by ensuring order accuracy and fast order processing times. To significantly expand the number of restaurants, JACK needs to implement strategies that encourage franchisees to launch new stores.

In that respect, the initiatives the company has enforced to improve same store sales growth are a step in the right direction and include: remodeling of most of its stores, altering the focus of its menu from premium priced indulgent foods to a balance of value oriented bundles and more expensive fare, deploying procedures and equipment to simplify the assembly of menu items, elevating customer experience by improving order accuracy and order processing speed, reducing the processing time at its drive-throughs, decreasing operational and kitchen complexity, limiting the number of ingredients utilized in food preparation, rapid menu innovation, overhauling the menu selections, improving the digital experience, and augmenting delivery coverage to all its stores.

In addition, to provide ancillary support for the transformation, JACK has implemented strategies to incentivize franchisees to launch new stores, overhauled the executive leadership team, including bringing in a new Chief Executive Officer (“CEO”), and restructured its long-term debt to optimize the capital structure for business development activities.

With regards to opening a large number of stores to fuel retail sales, considering that ~83% of JACK’s restaurants are located in California, Texas, Arizona, and Washington, the company certainly has significant white space to open new restaurants not only in regions where it has a limited presence but also in new geographies across the country. In that context, JACK needs to rapidly resolve its differences with its franchisees, because strong relations with a group that owns and operates 94% of its restaurants is necessary for optimizing profitability, and because the firm is dependent on franchisees to advance its geographic expansion strategy.

In that respect, JACK’s new CEO’s experience as a franchisee for Qdoba and Papa John’s (PZZA) will support his efforts to view the situation from the group’s point of view and provide them with the assistance they need to effectively operate their JACK restaurants. In addition, the financial support JACK provided the franchisees at the height of the pandemic and the economic incentives offered for business development, should have supported the company’s efforts to improve relations with the group. Ultimately, a majority of the franchisees’ grievances will disappear if the unit economics associated with their JACK’s restaurants improve due to initiatives the company has enforced to grow retail sales and expand margins.

An additional key factor in the JACK story is the underperformance of a substantial percentage of stores. In that context, we believe that depending on the magnitude of losses being experienced, the stores might be repurchased by JACK, flipped over to better performing franchisees, or permanently closed. On a long-term basis, the above solutions will be favorable for the firm’s secular growth and future profitability. In that regard, the underperformance of some percentage of JACK’s restaurants is not necessarily critical to the company’s business, as the culling of restaurants as they underperform due to age related or other factors is not uncommon among fast food chains.

Another primary element surrounding the JACK story is that of the contraction in its gross margins over recent years due to significant growth in minimum wage across the west coast, particularly in California, where ~42% of the company’s restaurants are located. The solution is to expand retail sales and launch stores in geographies where labor costs are less onerous. The increase in retail sales will result in lower marginal costs as overheads and fixed costs shrink as a percentage of revenues.

In addition, it is important to note that the pandemic has had a favorable impact on the company’s financial performance. Over F3Q2020, JACK reported ~$887 million in retail sales, reflecting a growth rate of 7.4% compared to F3Q2019, same store sales growth of 6.6% over the prior year, ~$242 million in revenues representing a year over year growth of 9%, $1.42 in EPS, and ~$90 million in operating cash flows.

At the end of F3Q2020, the company had a cash and cash equivalents balance of ~$160 million and long-term debt of ~$1.37 billion on its balance sheet. JACK declared a dividend of $0.40/share for the quarter. With a view to limit spending to better deal with pandemic related financial uncertainties, the firm has temporarily suspended its share repurchase program.

JACK Might Experience A Food Contamination Outbreak. It is noteworthy that food safety incidents happen periodically in the food service industry and have occurred in restaurants of several food chains over recent years. It is the handling of the incidents that decides public perception on the issue. Nevertheless, given that JACK has created a food safety program that tests for bacteria in every food product utilized in its restaurants, it is highly unlikely that the hamburger chain will evidence a repeat of the E. coli food safety incident it experienced in 1993.

We utilized Discounted Cash Flow analysis including a perpetual growth based terminal value, to arrive at a 1-year Price Target of $113/share for JACK. We assume a normalized 5-year revenue growth rate of 5%, (vs. FY2019 revenue growth rate of ~9.2%). In addition, we derive our net income for 5-years using a net profit margin of 11% (vs. net profit margin of ~9.9% in FY2019). Based on our analysis of JACK’s historic financial reports, we model normalized 5-year operating cash flows as 16% of revenues/year and straight line 5-year capital expenditure as 4% of revenue/year. Furthermore, we deploy a perpetual growth rate of 3% and a weighted average cost of capital of 8% to reach our terminal value and present value of free cash flow figures. We utilize the current diluted outstanding share count of 23.9 million to arrive at our Price Target.

Although JACK has been around for roughly 70 years, it has been unable to transform into a national player. Given its business dynamics, the company appears better prepared than ever before for substantial business development. Moreover, favorable business conditions, particularly the popularity of drive-throughs and the growth in customer’s aptitude for favoring multiple brands, represent an opportunity for JACK to capture the attention of additional customers. If JACK is able to optimally execute on the growth strategies it has implemented, the firm’s business will expand considerably. If not, a rare window of opportunity would have passed them by.