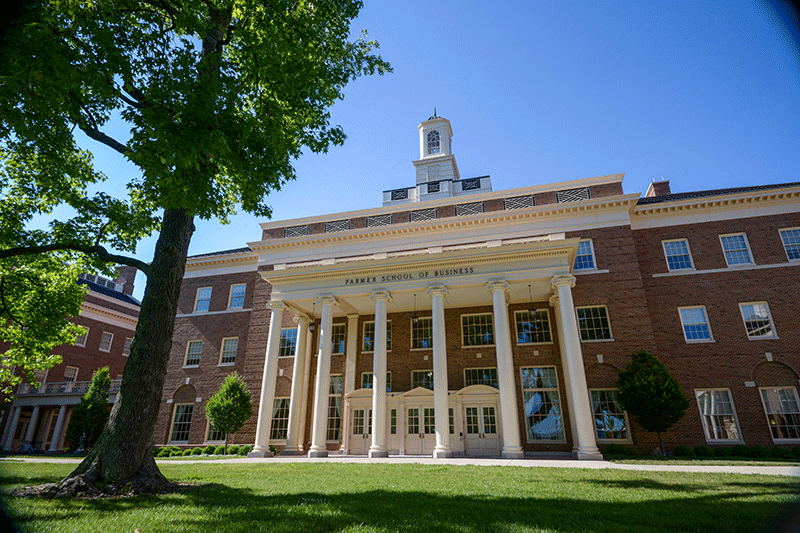 The Farmer School of Business adds a new major in real estate management.

The Miami University Board of Trustees approved a new bachelor’s degree in business with a major in real estate at its regular meeting Friday, Sept. 25, the latest new degree program aimed at growing enrollment and preparing students for high-growth careers.

Miami projects the real estate program will start at about 50 students before growing to about 100 students. The launch is partially funded by a private donation. The program joins several other academic degree options Miami has added during the past several years. Other new programs this year include bachelor’s and master’s programs in business analytics, a master’s program in business management and a bachelor’s degree in sports leadership and management (SLAM). Miami also is planning two new academic buildings: a clinical health sciences building and a data science building.

Trustees also approved renaming the Campus Avenue Building on Miami’s Oxford campus to Nellie Craig Hall, named for the first Black student to graduate from Miami. Craig joined the Miami community in 1903 as a student at the Ohio State Normal School, and went on to become the first African-American teacher in Oxford. The recommendation came from the Diversity, Equity and Inclusion Task Force, formed earlier this year by Miami President Greg Crawford.

Vicka Bell-Robinson and Anthony James, co-chairs of the task force, said the honor for Craig is “not about undoing the wrong that has occurred in the past, but rather about permanently acknowledging, through the naming of a building, that the story of Miami University is a story that involved all populations of people.” Bell-Robinson is director of residence life at Miami, and James is associate professor of family science and social work and interim vice president of institutional diversity and inclusion.

The renaming is just one of several dozen recommendations by the task force that already are being implemented, including a Diversity, Equity and Inclusion Fund that already has reached $1.275 million in university resources and private donations and continues to grow. Miami is forming an implementation team to bring each of the recommendations in the DEI report to reality. Miami also is focusing this year’s Boldly Creative call for proposals on efforts to improve diversity, equity and inclusion.

Miami trustees met virtually because of the coronavirus outbreak. President Crawford and other Miami leaders briefed trustees on services provided to students over virtual platforms during the pandemic, including:

Following a presentation on Miami’s budget by David Creamer, senior vice president of finance and business services, trustees approved a revised appropriation for the current fiscal year of $708.7 million, a reduction of $4.5 million. Increased spending on scholarships and a reduction in revenue from athletics and other auxiliary units were partially offset by a larger State Share of Instruction payment from Ohio. Miami still has the healthiest state-mandated ratios measuring overall financial health, including net income and financial reserves, of any public university in Ohio.

President Crawford updated trustees on Miami’s strategic direction, and Provost Jason Osborne provided details on the Boldly Creative initiative, including the creation of professional graduate programs and some online degree programs, and progress in the MiamiRISE strategic plan, including continuing improvement of graduation rates on all campuses. Osborne also highlighted the hiring of Alicia Knoedler as vice president of research and innovation

In other action, Miami trustees also: