More than a provider of business intelligence (“BI”) and cloud-based analytics services, MicroStrategy (NASDAQ: MSTR) has now become more famous for purchasing bitcoins or BTC with its CEO referring to the digital currency as “digital gold.”

Despite some regulators having apprehensions about bitcoin, the market has been responding positively with the stock outperforming peers as the amount of BTC purchased increased from 21,454 in August to 38,250 by September.

The CEO, Michael Sailor is a firm believer in the ability of the world’s largest cryptocurrency to be a better asset than gold as a safe haven.

He is also a firm believer in being an independent BI provider compared to other players which provide analytics services on top of CRM (customer relationship management) applications or public cloud offerings.

This strategy together with the advent of COVID-19 has resulted in some loss in market share.

With the takeover of Tableau by Salesforce (CRM) in 2019, the market was left with one less independent BI software provider.

On the other hand, the ranks of the CRM vendors like SAP SE(SAP) and public cloud providers also capable of delivering analytics solutions constituted by the likes of IBM (IBM), Oracle (ORCL) or Microsoft (NASDAQ: MSFT) were bolstered.

At that time, MicroStrategy’s CEO speaking during the Q2-2019 earnings call had said:

He was wrong and one year later, boosted by COVID, both public cloud and CRM providers offering the analytics option are being trusted by customers and it is MicroStrategy which has suffered from revenue shortfalls.

Hence, total revenues for the second quarter of 2020 were down by 4.3% (non-GAAP constant currency basis) compared to Q2-2019. Going into details, there was a 13.5% decrease in combined product licenses and subscription services revenues. 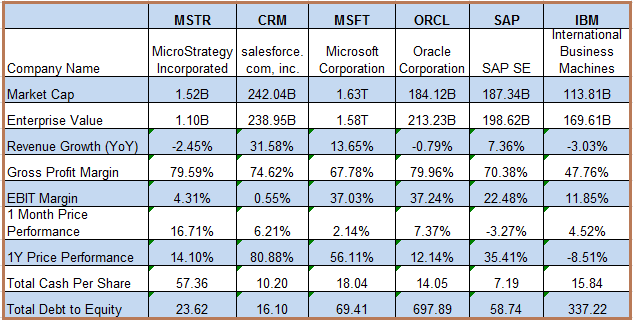 MicroStrategy’s year-on-year revenue growth is the worst except for IBM which is amid a restructuring exercise.

The COVID-led impetus to shift more workloads to the cloud by corporations in order to benefit from more flexible working environments (working-from-home) has been a key element of business continuity during the first half of the year.

Hence, COVID has mostly benefited public cloud providers like Microsoft which already provides Power BI as part of its offerings, as well as SAP with its Business Objects applications and Salesforce reinforced with Tableau’s analytics tool.

Furthermore, since making Amazon Web Services (NASDAQ:AMZN) its preferred infrastructure vendor in 2016, Salesforce has made similar agreements with Google (NASDAQ: GOOG) (NASDAQ:GOOGL) and more recently even with Microsoft with which it competes as a CRM play.

On the other hand, MicroStrategy due to the fact that it used to sell its software under a more traditional and complex licensing model made it difficult for customers to grasp the cost implications of moving to the cloud. Consequently, while not necessarily being more expensive than competitors, its product pricing was viewed as “opaque.”

Also, the company did not want to be too aggressive in its sales strategy and “force” any customer to move to the cloud.

But this is all set to change as part of the “cloud first focus.”

On a brighter note, while still dwarfed by the perpetual (traditional) licenses business, the subscription revenues has seen some strength (+12.7%) in Q2-2020 when compared with last year’s equivalent quarter. 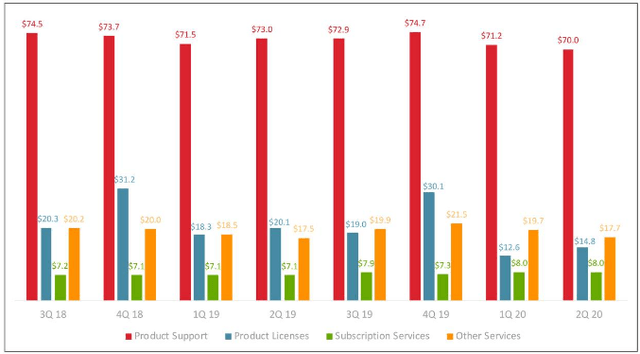 Furthermore, product support revenues fell primarily as the result of a decrease in new product support contracts, not on existing ones. Interestingly, less support sales were made also due to customers converting from perpetual licenses to subscription services or SaaS.

Hence, the executives now want to capitalize on this higher demand for subscription and going forward, the company will also institute incentive programs for existing on-premise customers to begin transiting workloads to their cloud platform.

Additionally, the company should receive a boost in this endeavor with the work-from-home drive.

However, the execution has to be watched carefully with the right message conveyed to customers who should not feel that priority is being given to cloud at the detriment of on-prem services. Failure to support on-prem customers during the transition period may result in loss of customer confidence.

In this case, the executives plan a cautious transition strategy spanning over “a few years” in order not to adversely impact revenue mix constituted by product license revenues, support revenues and subscription revenues.

There are also three positives in terms of financial efficiency for MicroStrategy.

First, the company has been able to reduce operating expenses for the second quarter of 2020 by 17.4% compared to Q2-2019. This has been done mostly through reduction of travel expenses and providing support services remotely as well as attending online sales events rather than live (physical) ones.

Second, MicroStrategy shares the top spot with Oracle in terms of gross profitability even beating the likes of Microsoft and Salesforce. This shows that its software developers and implementers have attained a high level of efficiency. Moreover, with a higher dose of SaaS through the cloud focus, operational costs should further fall down translating into better EBIT margins.

Third, with a cash per share ratio of 57.36 and debt to equity ratio of 23.62, MicroStrategy is financially better off than all its peers.

Finally, I take a look at product ratings from an independent review website.

In this case, while it does not have the scale of Salesforce or IBM, MicroStrategy’s core analytics product is one of the best when compared to competitors.

Despite suffering from a deficit of $34.8 million in the last quarter, MicroStrategy still has plenty of firepower with a cash position of $530.9 million as of June 30 2020.

With this cash level, the company could also withstand the current macroeconomic storm with some customers resorting to budget freezes.

The start of the third quarter did see some relaxation in customers’ attitude but subsequent waves of COVID infections could bring further disruption and result in longer deal cycles.

However, MicroStrategy may turn this challenging economic condition to its advantage as it starts to motivate its sales force to migrate customers from on-prem to the cloud and makes its “cloud pricing more transparent online for prospective customers and make it easier for them to buy the cloud platform and HyperIntelligence in the second half of 2020 and into 2021”

Also, technically speaking, there are two key enablers which should help MicroStrategy.

First, according to the executives, the process of re-platforming the data warehouse layer, which is a common catalyst for switching to a cloud BI platform has reached a critical mass.

This said, customers opting for cloud deployments sometimes do so at the expense of on-prem based subscriptions depending on how fast the company is able to add more customers.

In this case, there are software companies like Solarwinds (SWI) which have managed the transition right through the pandemic as they were able to provide customers with products with lower upfront costs amid a period of budgetary cuts.

Thus, by being able to expand cloud-based sales faster to offset potential shortfalls in on-prem (perpetual) revenues, MicroStrategy could avoid disruption in revenues.

Also, this is no rocket science as others have already performed the same path successfully.

Hence, with a Price to Sales ratio of 3.48, well below peers with the exception of IBM, MicroStrategy is a buy. I see a 10-15% short-term upside as the market favors stocks with cash, low debt and investors shying away from holding the dollar.

To date, the company has bitcoins valued to about $425 million (based on the purchase prices) and as such, MicroStrategy is a stock for those wanting some bitcoin exposure but hesitant to purchase the digital currency directly.

Additional disclosure: This is an investment thesis and is intended for informational purposes. Investors are kindly requested to do additional research before investing.