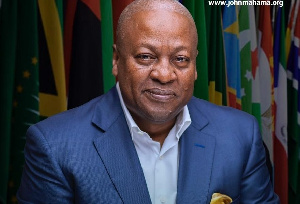 Former President John Dramani Mahama has promised to relaunch investigations into the visa scandal that rocked Ghana’s participation at the 2018 Olympic Games.

A visa racketeering scheme was uncovered by Australian authorities after over fifty people who paraded themselves as journalists were denied entry into Australia.

The government suspended former Deputy Sports Minister Pius Hadzide and NSA Board Chair Kwadwo Baah Agyemang for their alleged roles in the scandal.

They were however reinstated after investigations by the Criminal Investigation Department of the Ghana Police Service cleared them of any wrongdoing.

A press statement signed by Director of Communication at the Presidency, Mr. Eugene Arhin read: “the President of the Republic, Nana Addo Dankwa Akufo-Addo, has reinstated with immediate effect, the Deputy Minister for Youth and Sports, Pius Enam Hadzie and the Chairperson of the Board of the National Sports Authority, Kwadwo Baah Agyemang, following the completion of investigations into the ‘Australia Visa Scandal’ by the Criminal Investigation Department of the Ghana Police Service”.

However, neither the CID nor government have for the past two months reveal to Ghanaians the figures behind the disgrace the befell the country in Australia.

In their manifesto which was unveiled on Monday, September 7, the NDC promised to reopen investigations and uncover the culprits behind the scandal.

The NDC listed the scandal among a number of cases it will investigate if given the mandate to run the country in the 2020 elections.