PHRMA DOESN’T BACK TRUMP’S DRUG-DISCOUNT CARDS: President Donald Trump’s announcement on Thursday that has planned to send $200 drug discount cards to Medicare beneficiaries — which would cost at least $6.6 billion, as POLITICO’s Rachel Roubein and Susannah Luthi report — comes after talks between Pharmaceutical Research and Manufacturers of America and the administration broke down this month. PhRMA, unsurprisingly, declined to back Trump’s plan. “As we’ve previously said, one-time savings cards will neither provide lasting help, nor advance the fundamental reforms necessary to help seniors better afford their medicines,” the trade group said in a statement.

IN MEMORIAM: Jim Smith, who spent decades in Washington as a prominent financial services lobbyist before retiring in 2015, died on Wednesday, according to his lobbying firm. He was 89. “He was strong and vital almost to the very end, out playing golf just a couple of weeks ago,” Jim Free, with whom Smith co-founded the Smith-Free Group, wrote in an email this morning announcing Smith’s death. “But the cumulative effects of Parkinson’s came to be too much.”

— Smith, a native of South Dakota, worked on Capitol Hill and for the American Bankers Association and Charls E. Walker Associates before co-founding the Smith-Free Group. He lobbied for clients including Mastercard, Bank of America, General Electric and the Financial Services Roundtable (now known as the Bank Policy Institute following a merger), according to disclosure records. “He was acknowledged as the dean of the banking lobbying practice here in town until his retirement,” Tim Locke, a longtime colleague at the Smith-Free Group, said in an interview.

A message from the Consumer Brands Association:

America’s recycling system just got an abysmal review – at a time when we need it most. Only 11% of respondents of our latest poll said the recycling system is doing its best. With more plastic waste in the wake of COVID-19, it’s time to fix this mounting problem.

HOW A PESTICIDE INDUSTRY LOBBYIST WORKED THE AGRICULTURE DEPARTMENT: “The emails, from a pesticide industry lobbyist to employees at the Department of Agriculture, expressed alarm over proposed guidelines issued by a United Nations task force working to combat the rise of drug-resistant infections that kill thousands each year,” The New York Times’ Andrew Jacobs reports.

— “Ray S. McAllister, a policy official at the trade association CropLife America, urged U.S. agriculture officials to fight any effort to include the words ‘crops’ or ‘fungicides’ in the guidelines — a position that would run counter to growing international consensus that the overuse of antifungal compounds is a threat to human health by contributing to drug resistance and should be monitored. … When the Codex Intergovernmental Task Force on Antimicrobial Resistance met in South Korea several months later, the American delegation insisted that the guidelines omit any references to fungicides, a stance that infuriated other participants and forced a monthslong delay in the task force’s work.

— “The emails, which were written in 2018 and obtained through a lawsuit by the Center for Biological Diversity, an environmental advocacy group, offer a behind-the-curtain peek at how the powerful pesticide industry influences policy decisions that can affect billions of people across the globe. In a statement, the U.S.D.A. said the email exchanges were simply part of the agency’s process for crafting its official position. ‘It is the normal course of business for U.S.D.A. to solicit input from industry when developing a technical document in order to understand current practice in the United States,’ the agency wrote.”

MEANWHILE, IN CALIFORNIA: “A state investigation into the country’s largest natural gas utility is steadily piecing together details of how the company may have cloaked its advocacy by recruiting local politicians and minority groups to promote fossil fuels at California ports, according to people familiar with the probe and documents obtained by POLITICO,” POLITICO California’s Colby Bermel reports. State utility watchdogs are examining whether Southern California Gas “acted unlawfully in its lobbying efforts as the company fights the state’s transition away from oil and gas.”

— “The Public Advocates Office, an independent branch of the California Public Utilities Commission, launched an investigation last year when it found SoCalGas spent ratepayer dollars to start a group opposed to cities phasing out or banning natural gas in new buildings. The company ‘is working to undermine state policy through lobbying and other efforts to misinform the public and encourage the continued usage of natural gas,’ the PAO wrote this summer. The PAO probe has since widened to include other SoCalGas activities, including the company’s relationship with Imprenta Communications Group, a public affairs firm focused on issues in minority communities.”

ANNALS OF ELECTION FUNDING: “Facing mounting expenses and with Congress yet to provide more money, election administrators across the country are struggling to meet the extraordinary costs of holding an election amid a pandemic,” The New York Times’ Ken Vogel reports. “With Election Day a little more than five weeks away and early voting underway in some states, many municipalities and states are turning to alternative sources of funding, most notably $300 million in grants from the Facebook chief executive Mark Zuckerberg.”

— “But now even that money is becoming enmeshed in partisan disputes, with conservative groups opening a legal assault on Thursday to block private grants from going to election administrators in Democratic strongholds in four swing states, arguing they will disproportionately help Democrats like the party’s presidential nominee, Joseph R. Biden Jr. … Erick G. Kaardal, a lawyer affiliated with the Thomas More Society, a conservative nonprofit legal group that has been aligned with the Trump administration, predicted Mr. Zuckerberg’s grants would set a bad precedent.” The Thomas More Society said it filed lawsuits in federal court on Thursday against localities that received nearly $26 million from one of the groups to which Zuckerberg gave, the Center for Tech and Civic Life. 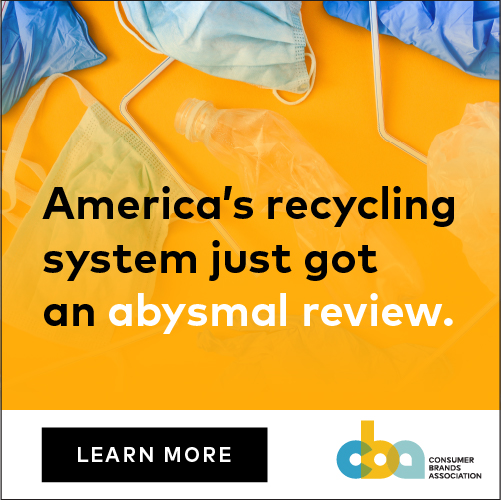 A message from the Consumer Brands Association:

There has never been a more critical time to reimagine and rebuild America’s recycling system. It’s a massive undertaking that will take years to achieve but leave generations better for it. We have an opportunity to give Americans what they want, and the environment desperately needs — a modern recycling system that will make a positive, lasting impact. To make this opportunity a reality, the imperative — and sometimes the hardest part — is to begin. See how Consumer Brands has gotten started.