The stock market rout continues. As I type this paragraph, the tech-rich Nasdaq index (QQQ) has crossed into correction territory intraday, defined as a 10% pullback from the peak – which in turn happened a mere two weeks ago.

On September 4, I wrote about how the Nasdaq had clearly raised a “bubble flag”. Only five times in the past 20 or so years had the index lost more than 3% in value the day after the market reached an all-time high: (1) three times in early 2000, just ahead of the dot-com bubble burst, and (2) twice in 2020, including in early September. This kind of price action suggested to me that bulls had been dictating the pace of the market, but that an army of hungry bears were ready to pounce when given the opportunity.

My fears over a potential tech bubble burst (or even the existence of one) have only grown larger since then. Therefore, I put together a simple and hopefully prudent-enough idea to take advantage of a potential meltdown in the Nasdaq using ProShares Short QQQ (NYSEARCA:PSQ). 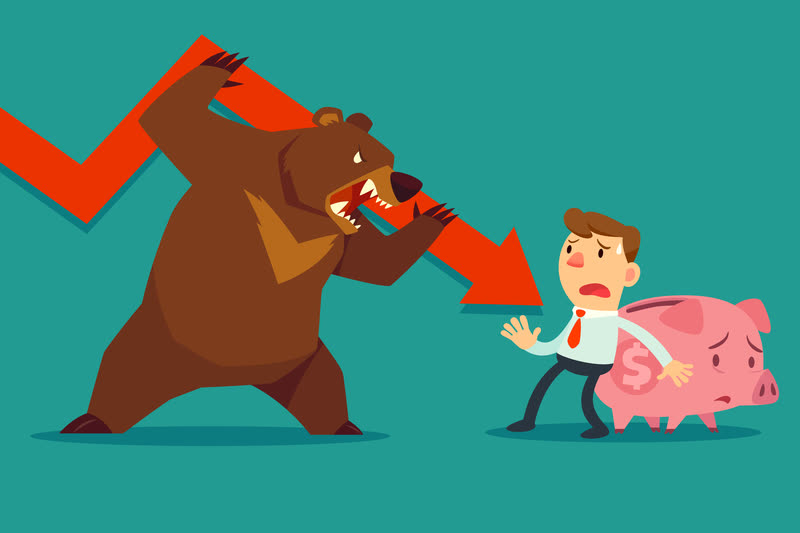 PSQ is an inverse ETF that, as described by ProShares, “seeks a return that is -1x (negative one time) the return of its underlying benchmark for a single day”. In this case, the target is QQQ, as the ETF’s name itself suggests.

To be very clear, inverse ETFs can be very tricky and wealth-destroying instruments. First, if one assumes that stocks in general and the Nasdaq 100 more specifically should rise in value over time, then PSQ has a negative expected return profile in the long run. Second, if left unattended for much more than a day, PSQ can produce results that are not aligned with its goal of delivering the inverse performance of QQQ on a daily basis.

That said, PSQ has been a very effective instrument to play the Nasdaq from a bearish angle. Below is an inception-to-date backtest of a portfolio that is invested 50/50 in QQQ and PSQ and, very importantly, rebalanced monthly. One would reasonably expect this hypothetical portfolio to produce returns of roughly zero over the fourteen-year period. In fact, it did: CAGR of -0.3% with minimal annualized volatility of 1.4%. Keep in mind that at least some of the drag to returns can be blamed on PSQ’s hefty 95-bp management fee. 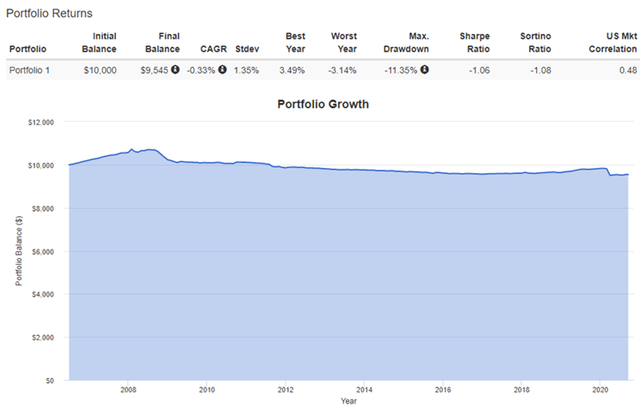 Using PSQ in a pair trade

Of course, the section above is just a proof of concept. Simply buying PSQ in hopes that the Nasdaq will continue to tank is barely a reasonable strategy, in my view. Think about how wildly stocks can swing from one day to the next, especially in the middle of a correction, which could lead to gut-wrenching losses and unsettling volatility.

Instead, my idea involves the pairing of PSQ with a long position in SPDR Dow Jones Industrial Average ETF (DIA) at a ratio of 50/50 (to be more specific: 50/50 of a portion of one’s total portfolio, which in turn can and should be only a small allocation). This position would largely capture the difference in performance between the Dow Jones (long) and the Nasdaq (short).

I discussed this subject in more detail last week. As a recap, I observed that the Dow has historically outperformed the Nasdaq very consistently over a period of 24 months when its underperformance relative to the tech-rich index surpassed 25 percentage points in the previous 24 months. The scatter plot below illustrates the idea. The x-axis represents past performance, and the y-axis represents future returns for each trading day in the sample. 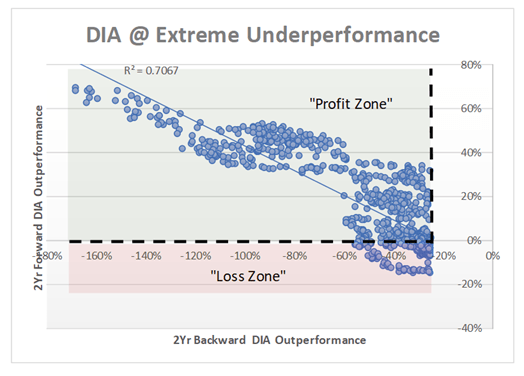 When I published the article above, the Dow had been underperforming the Nasdaq over a two-year period by 32 percentage points. At that level of underperformance or worse, the average return of a 50/50 long-short portfolio similar to the one described above would have been 12% over the following two years, or about 6% per year. In roughly five out of six times (i.e. about 85% of the time), going long the Dow and short the Nasdaq at these levels of historical underperformance by the former would have produced positive forward-looking returns.

Going long DIA and PSQ also has a less obvious benefit. Historically, this setup has been negatively correlated with the broad market, at a meaningful factor of nearly -0.4 over the past 20-plus years. This makes some intuitive sense, since stocks in the Nasdaq probably have a higher beta than those in the Dow – so shorting the Nasdaq and holding the Dow on the way down should create a net positive impact on the portfolio.

That is to say, this trade idea may not only be expected to produce positive returns, based on the analysis of historical trends, but also serve as a diversifier to a stock portfolio. A combination of these two factors (positive expected returns and negative correlations) is very hard to come by, aside from government bonds.

Clearly, my trade idea above is very dependent on mean reversion materializing. For the past several years, the Dow’s underperformance over the Nasdaq has not only not reverted back to historical average, but it has widened instead (see graph below).

In my view, the main difference this time is that (1) the relative performance gap has reached levels rarely seen before, as it widened suddenly since late 2019, and (2) the Nasdaq has finally shown signs of fatigue, suggesting a possible shift in momentum.

I cannot be sure whether my DIA-PSQ trade idea would work, but I find the odds favorable. I would look to exit the position once the Dow’s trailing 24-month underperformance reached 20 percentage points, beyond which it becomes increasingly hard to make a high-conviction mean reversion case against the Nasdaq.

“Thinking outside the box” is what I try to do everyday alongside my Storm-Resistant Growth (or SRG) premium community on Seeking Alpha. Since 2017, I have been working diligently to generate market-like returns with lower risk through multi-asset class diversification. To become a member of this community and further explore the investment opportunities, click here to take advantage of the 14-day free trial today.

Additional disclosure: I am long and short futures contracts on the Dow Jones Industrial Average and the Nasdaq 100.