It’s been a tough couple of months for the Gold Miners Index (GDX), with the index down nearly 20% from its highs with the price of gold (GLD) suffering a much-needed correction. Unfortunately for Resolute Mining (OTCPK:RMGGF) investors, not all miners are created equal, and Resolute is down nearly 35% in the same period. The company recently received news that the Union National des Travailleurs du Mali SOMISY-SA (the Union) has decided to observe a 10-day strike at its flagship Syama Gold Mine, forcing the company to pull its FY2020 production guidance. While a short-term hiccup, it’s added uncertainty to an already weak investment thesis. Therefore, I continue to see Resolute as an Avoid in favor of better-managed peers who have not diluted this year, have better margins, and operating in more favorable jurisdictions. 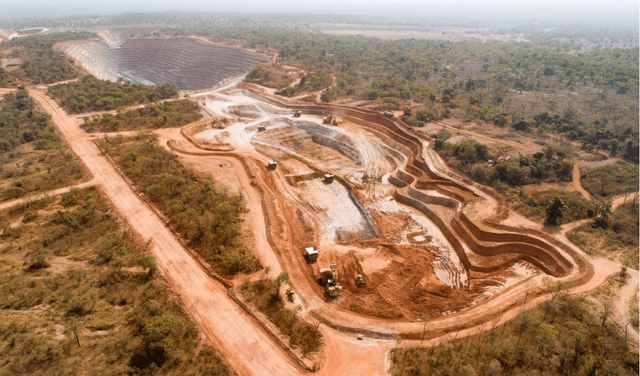 Resolute Mining released its H1 results last month and reported gold production of 217,900 ounces in the first half of 2020, up 23% from the year-ago period. The significant increase resulted from a material contribution from the newly acquired Mako Mine from the Toro Gold acquisition, offset by Ravenswood’s lower production. This shift has improved the company’s cost profile considerably as while Ravenswood was a Tier-1 jurisdiction asset, it was quite high-cost, with trailing-twelve-month all-in sustaining costs of $1,422/oz. Unfortunately, a recent strike has derailed Resolute’s plans to meet FY2020 production guidance of 430,000 ounces, which it was well on track to meet as of H1 2020.

Earlier this month, we received news that the Union would be observing a 10-day strike at Resolute’s flagship Syama Gold Mine. The decision to move to strike relates to a request to reinstate Syama workers who have been stood down on full pay due to the company’s COVID-19 protocols. While a 10-day strike is unlikely to have a huge impact on operations, we have yet to receive notice of a resolution of the strike, and it could weigh on worker morale over the medium-term. Given that this occurs at the company’s flagship asset, which contributes over 60% of annual gold production, this is a negative development. 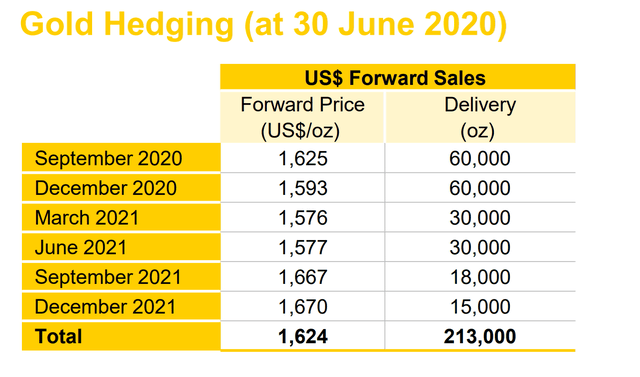 Based on average quarterly gold production of over 60,000 ounces from Syama, and a more than 10% hit to production with 10 days offline out of 90 working days, we could see up to 5,000 fewer ounces of gold produced in Q3, which is equivalent to over $7.5 million in revenue. While this isn’t a huge deal by any means, it will likely affect the average gold price for the quarter, as a higher proportion of ounces will have to be sold into hedges, with less unhedged production. As the above table shows, Resolute has 60,000 ounces set for delivery in Q3 at an average price of $1,625/oz, so we should see another quarter of inferior average realized gold prices relative to peers. During Q2, Resolute’s average realized gold price was $1,427/oz, more than $150/oz below the sector average of $1,580~/oz. For investors looking to participate in a gold bull market vs. sit it out in a heavily hedged producer, this isn’t ideal.

Some investors might look at the above stats and Resolute’s potential to be a 400,000-ounce producer and conclude that the stock is dirt-cheap at current levels. This is because the current market cap is $784 million at US$0.71, based on 1104~ million shares outstanding. However, if we add in the company’s US$220 million in net debt, we come up with an enterprise value of US$1,004 million. I would argue that a $1.0~ billion enterprise value for a 400,000-ounce per year producer is quite cheap, as long as you know what you’re buying into, and the team’s track record. In Resolute’s case, it isn’t pretty, with the 17% share dilution near multi-year lows being just one of a few reasons to avoid the stock. 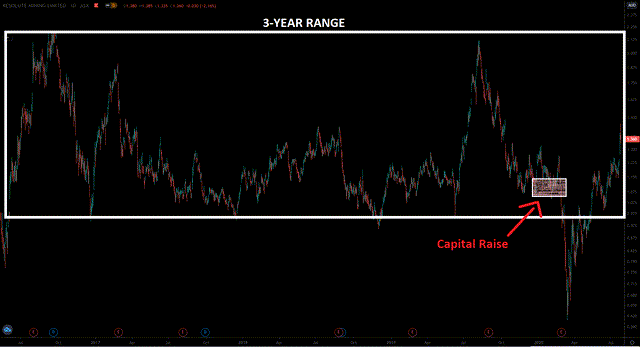 In addition to the unfavorable share dilution, which will weigh substantially on earnings and cash-flow per share, the company operates out of two of the least attractive jurisdictions; Mali and Ghana. Currently, both are ranked Tier-3 jurisdictions. Meanwhile, the company’s all-in sustaining costs of $1000/oz~ are slightly above the industry average of $970/oz. In summary, it’s hard to find any redeeming qualities about Resolute from a fundamental standpoint, with the least attractive operating jurisdictions, slightly above average costs, and the fact that it’s one of the only intermediate producers to dilute shareholders with a significant share issuance this year. While I have no issue with dilution in trying times when everyone is diluting, it’s inexcusable when gold is hovering at multi-year highs like it was in January. 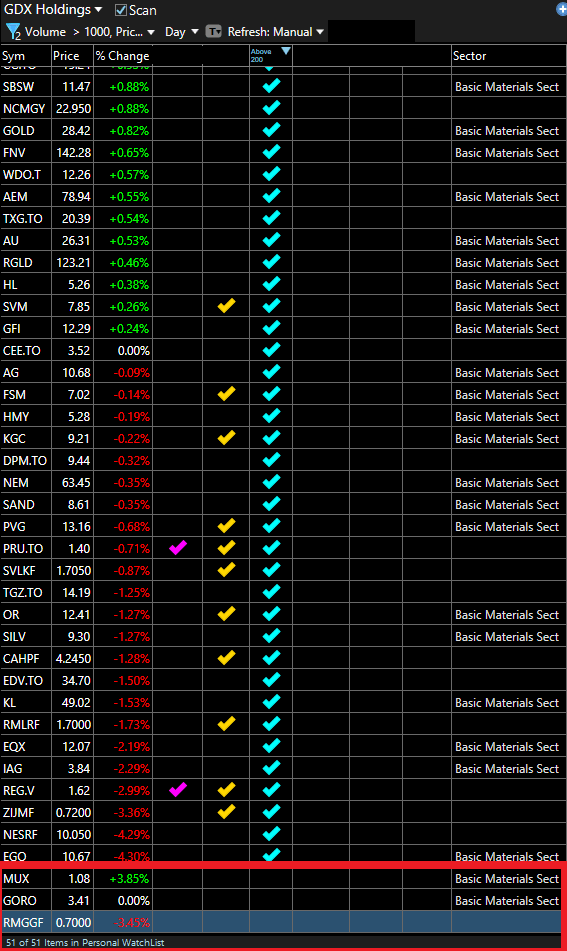 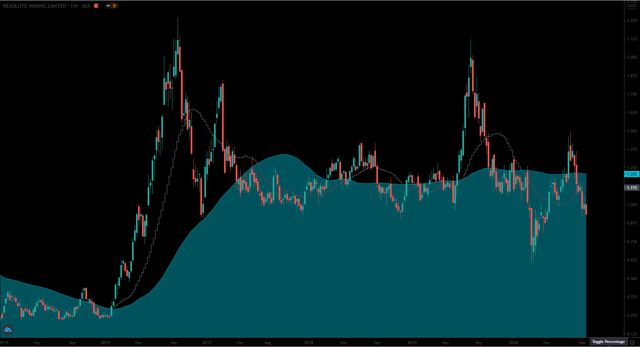 As we can see above, the best time to own Resolute Mining was when it was above its key weekly moving average (shaded area), and it’s generally been a good idea to avoid the stock when it sunk back inside this area. This is because the stock has typically suffered double-digit drawdowns after re-entering this area. Currently, Resolute Mining remains below both of its key weekly moving averages and inside the shaded area. This is even though the gold price and the Gold Miners Index are trading well above these key levels. Therefore, it is clear that Resolute Mining is massively underperforming the index and is only an ideal selection if an investor hopes to underperform the sector. While this relative weakness could change at some point, there is no evidence of this presently. 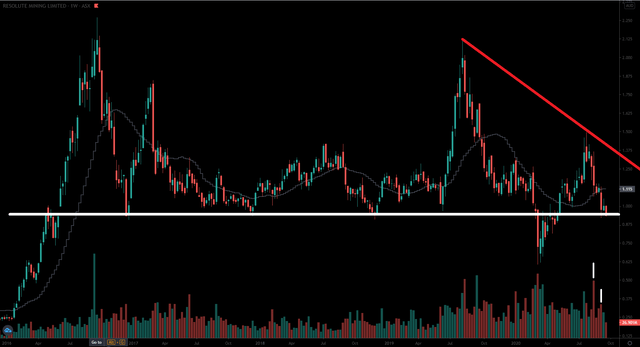 The one piece of good news is that while we see heavy selling volume on the downside, Resolute is now sitting against a multi-year support level, and the stock might finally see some support here in the A$0.90 area. However, I generally do not like to buy support areas when they’ve been tested multiple times, as it is not a great reward to risk trade. By the time a support level has been tested several times, that support level is now obvious. Besides, we don’t see any evidence of real accumulation or heavy demand for Resolute’s shares despite this sell-off. If the stock were to bounce here and find some support, I believe that any rallies above A$1.27 before year-end would provide an opportunity to take some profits.

industry laggards are often cheap for a reason. Therefore, while patient investors are being provided an opportunity to buy some solid miners on sale during this correction, I do not see Resolute as a miner worth parking money in currently. The whole point of preserving capital for sell-offs is to establish positions in the best companies. A company with industry-lagging margins, inferior operating jurisdictions, and a history of unfavorably priced share dilution is not what I would consider high-quality. Therefore, I believe investors would be wise to shop for the best miners like Kirkland Lake Gold (KL) and Newmont Corporation (NEM) than invest in the worst during this correction.

Disclosure: I am/we are long GLD, KL. I wrote this article myself, and it expresses my own opinions. I am not receiving compensation for it (other than from Seeking Alpha). I have no business relationship with any company whose stock is mentioned in this article.

Additional disclosure: Disclaimer: Taylor Dart is not a Registered Investment Advisor or Financial Planner. This writing is for informational purposes only. It does not constitute an offer to sell, a solicitation to buy, or a recommendation regarding any securities transaction. The information contained in this writing should not be construed as financial or investment advice on any subject matter. Taylor Dart expressly disclaims all liability in respect to actions taken based on any or all of the information on this writing.