The Prime Minister’s Office has confirmed that Mr Morrison was referring to Australian citizens and permanent residents stranded overseas, who have registered their interest with the consular offices to return home.

But in reality, the number of people who can now return is much larger than the official figure of 24,000, as it does not take into account a significant number of temporary visa holders who have secured travel exemptions.

‘Government has sidelined temporary visa holders throughout the pandemic’

Greens Senator Nick McKim, who has been raising the plight of visa holders, said the federal government also needs to step up its efforts to support temporary migrants alongside Australians stranded overseas, which calls for sending charter flights to “areas of greatest needs.”

As at August 31, the Australian Border Force approved 16,860 requests from people seeking to enter Australia, of which 5,142 were granted to people with critical skills and 3,419 on compassionate grounds. ‘What’s the point of giving exemptions if you can’t let us in?’

For Ms Dhawan, this meant she was a step closer to reuniting with her 17-year-old son who is living alone in Tasmania ever since the borders were snapped shut in March. 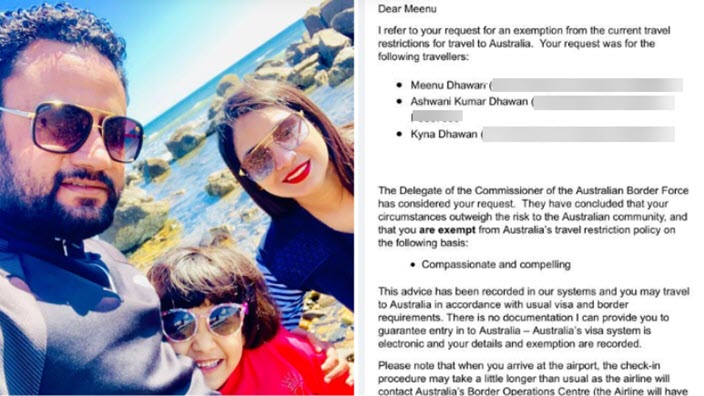 Meenu Dhawan with her husband Ashwani and daughter Kyna.

But a month later, nothing has changed for the Dhawans as they continue to scramble to return to Australia as they wait for India’s national carrier, Air India to announce its next phase of flights – currently their only option to fly home.

“Air India is the only carrier that’s currently operating flights, but because there are over 10,000 Australians fighting to book 50 available seats on each of those limited flights, they are snapped within seconds of becoming available,” she said.

The 37-year-old said it took her five months and 15 attempts to secure a travel exemption and if the Australian government did not remove the cap on arrivals and arrange repatriation flights in the next few weeks, it could take her and the other migrants well into 2021 to reunite with their loved ones.

What is the point of giving exemptions to separated families if there are no flights to take us home? Exemption or not, our status still hasn’t changed. We continue to remain miles away from our lives and loved ones.

Senator McKim told SBS Punjabi that the Greens are pushing the federal government to arrange repatriation flights to countries like India where a majority of people are stranded, and the pandemic situation is rapidly worsening.

“If the government accepts our suggestion of chartering flights to repatriate Australian citizens, places could also be offered to temporary visa holders. Helping both groups of people would be a win-win.”

In an interview last week, Qantas Group CEO Alan Joyce said the airline is in discussions with the federal government about restarting international operations to help bring Australians home.

“We have been talking to the government about whether we can put special Qantas flights on to destinations and offer reasonable airfares,” Mr Joyce told ABC Radio.

On questioning if there has been any progress on those deliberations, a Qantas spokesperson told SBS Punjabi:

Ashwini Srinivasan who remains stuck in India with her two children aged 9 and 6 despite getting an approval to travel on compassionate grounds said she understands the government’s need to prioritise the return of Australians over temporary migrants. 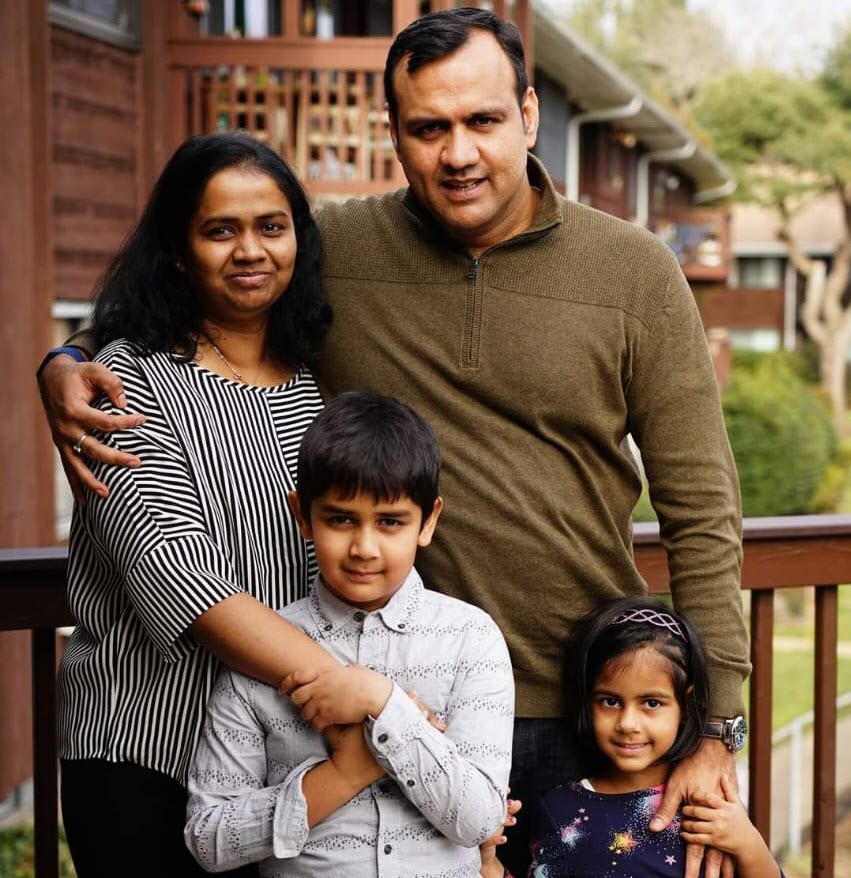 Ashwini Srinivasan remains stranded in India with her children while her husband is alone in Sydney.

“We understand why they would first need to ensure that their citizens and permanent residents return to their home and families before Christmas. It is their legal obligation,” she said.

Ms Srinivasan, however, added that the government must consider sending charter flights to repatriate Australians, so that there are more flying options for everyone, including the temporary migrants and their families with inward exemptions.

“The endpoint is that Australia needs to get rid of the arrival caps altogether and send planes to India where a majority of their people are stuck. Right now all of us are at the mercy of the Indian government to announce the next phase of Air India flights.

“If Australia could send planes, or enter into an air bubble agreement with India, no one would have to scramble for tickets,” she said.

People in Australia must stay at least 1.5 metres away from others. Find out what restrictions are in place for your state or territory.

Testing for coronavirus is now widely available across Australia. If you are experiencing cold or flu symptoms, arrange a test by calling your doctor or contact the Coronavirus Health Information Hotline on 1800 020 080.
The federal government’s coronavirus tracing app COVIDSafe is available for download from your phone’s app store.

SBS is committed to informing Australia’s diverse communities about the latest COVID-19 developments. News and information is available in 63 languages at http://www.sbs.com.au/coronavirus