When I researched and wrote about Roku recently, I dived into the streaming ecosystem. One trend is Smart TV’s total viewing time increased from 7% to 15% in 1H2020, according to the Conviva State of Streaming Q2 report.

In the TV manufacturers sector, TCL (OTCPK:TCLHF)’s recent surge in North America caught my eyes. TCL electronics holdings company (hereinafter referred to as TCL) is a Chinese company headquartered and listed in Hong Kong (its stock symbol 1070.HK) and incorporated in the Cayman Islands. It manufactures TVs, other consumer electronics, and build a comprehensive ecosystem for smart TVs. In 1Q19, TCL ranked No1 in North American by TV unit shipment.

All dollar amounts discussed in this article are in USD, while numbers cited in its financial reports are in HKD. I use 1USD =7.75HKD for conversions.

I am very bullish on TCL. A conservative model values the company at USD$2.86 billion, including $1.6 billion for its TV business, $0.36 billion for its Internet/streaming business, and $0.9 billion net tangible assets. With its current market cap at USD$1.87 billion, that’s 50% upside potential. However, its true upside potential is even more than that as discussed below. 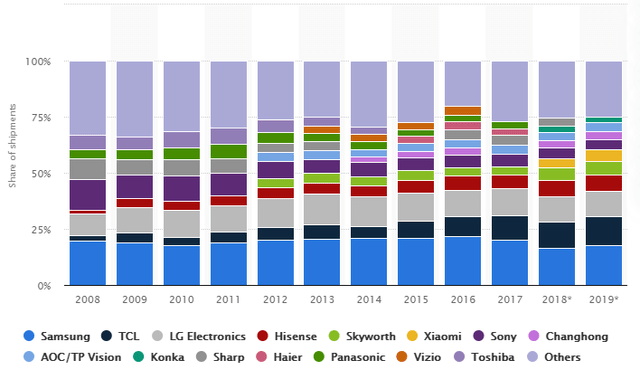 In addition to being the top 3 market leader in China and the US, TCL also entered into many European, Asian, and other emerging markets with impressive growth. A few examples include France (No. 3), Mexico (No. 4), Thailand (No. 4), Morocco (No.3).

While it expands aggressively on a global scale, TCL maintains a steady 18% – 20% profit margin in the last 18 months and has been profitable since 2017. 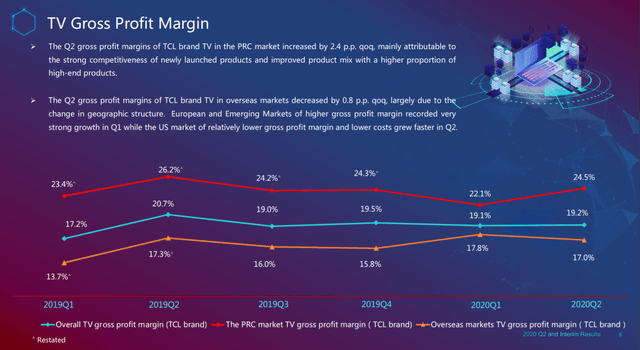 In terms of valuation, considering the TV business is a highly competitive and thin-margin business, despite its 30% YoY explosive growth globally, I use 10x P/E to evaluate TCL TV business at $1.6 billion. (its last 12-month net profit around HKD$1.25 billion, equivalent to USD$161 million)

In the US market, TCL Smart TV primarily uses Roku. Most of its TV sets in China use its own streaming OS Falcon, with about 17 million active users.

Its Internet/Streaming revenue was about USD$50 million in the first half of 2020, grows at 60% YoY. It is relatively small, accounting for 3-4% TCL total revenue. Unlike its TV business, Falcon has a lucrative gross margin of 60%, and a net margin of 36.7%. Its active users increased by 24% to 17 million users, average time spent on TV increased by 16.8% YoY, and Average Revenue per user (ARPU) increased by 29% YoY to a little over $4. 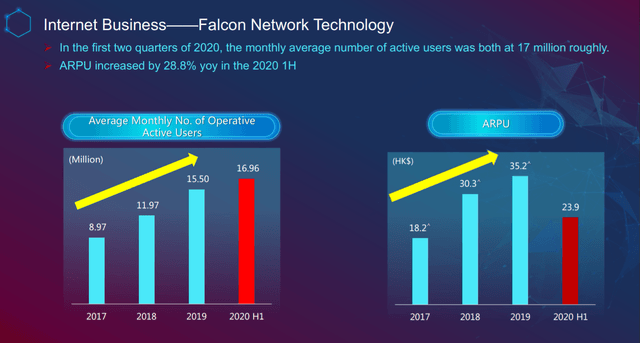 In terms of valuation, Roku (ROKU) is the closest one I can think of as a pure streaming play. At $200, Roku is valued at 17x P/S. I wouldn’t compare Falcon to Roku as Roku is the pioneer and a dominant force in the streaming business, has outstanding products, a solid track record, and deserves a much higher valuation ratio. Thus, I choose 6x p/s and value the TCL streaming business at US$ 0.6 billion. TCL has 42% ownership of Falcon, valued at US$0.36 billion.

TCL has a strong balance sheet, excluding all properties, plant, equipment, and goodwill, its net tangible assets are about US$0.9 billion.

Using sum-of-the-parts analysis values TCL at USD$2.86 billion, 50% higher than its current valuation. However, that is a conservative scenario that does not capture its real upside potential.

Image when you watch a TV series, you like a jacket one actor wears, you pause the TV, switch the actor to you, you like how it looks and buys the jacket – eCommerce done all through TV. TCL currently has a 13% TV market share and a US$1.9 billion market cap. That values the whole global TV segment at a mere $15 billion!

One might argue, even full-blown TV eCommerce becomes realities, TV manufacturers won’t be the only players in that space. I agree with that, and companies like Facebook (FB), Zoom (ZM) are already developing products that enrich TV interactive experience. However, I believe TV manufacturers will be key players in this eco-system. Could the whole TV market be valued at $100 billion? I am inclined to say yes, that would be a 6x baggers opportunity for TCL.

US-China trade dispute: Would US-China trade disputes significantly impact TCL’s export capabilities from China to other countries, especially the US? As I looked into this, I noticed in addition to its production capabilities in China, TCL has set up global production capacity in Mexico, Poland, Vietnam, and India with 15 million sets per year capacity. That ensures the overseas market supplies to mitigate the effect brought by the China-US trade dispute.

Trading: TCL Electronics is listed on the Hong Kong Stock Exchange. US investors can purchase via American depositary receipt (ADR), and its symbol is TCLHF. While ADR brings convenience to foreign investors, please be aware while ADR price closely tracks company stock price on its home exchange, liquidity is usually significantly less, and often results in wide bid/ask spread thus higher transaction cost. In TCL’s case, I often observe 2-5 cents spread (e.g. best bid @ 0.78, best offer @0.81). So if you choose to buy TCL stock, use limit orders, and compare it to its last price published on the Hong Kong Stock Exchange.

As of writing, TCL is priced at US$0.78/share. My conservative model values TCLHF at $1.2 /share, about 50% upside potential. Furthermore, its true potential could make TCL a multi-bagger in the next 5-10 years. It might be a far-fetched dream for now, but with its current valuation, I consider that multi-bagger potential a free long-term option comes with the stock purchase.

Having said that, TCL is a small to medium-size market cap company listed in foreign exchange, I expect high volatility in its stock price, and a long term investment horizon (>2-3 years) is desired.

If you like this idea, I believe you might like a similar style idea I published last month. A conservative valuation offers some upside potential, while the multi-baggers possibility is almost a free long-term option play that comes with the investment. I hope you enjoy both ideas, and I would appreciate you following me. Thank you and best luck with your investment.

Disclosure: I am/we are long TCLHF. I wrote this article myself, and it expresses my own opinions. I am not receiving compensation for it (other than from Seeking Alpha). I have no business relationship with any company whose stock is mentioned in this article.

Editor’s Note: This article covers one or more microcap stocks. Please be aware of the risks associated with these stocks.