This column assumes that ETFs comprise the bulk of the individual’s portfolio and investment assets.

The (XLK), (XLC) and (XLY) — the three most important sectors to the (SPY) and (QQQ) have “broken out;” but their movement this week was tentative.

For now, stay on the sidelines and make sure you’re appropriately hedged.

Although the market was higher last week, there isn’t a solid trend in place. Prices meandered. There are eight different sharp drops. Traders and programs had itchy trigger fingers last week, which means they were concerned about bad news. However, the lower 330s held for technical support. 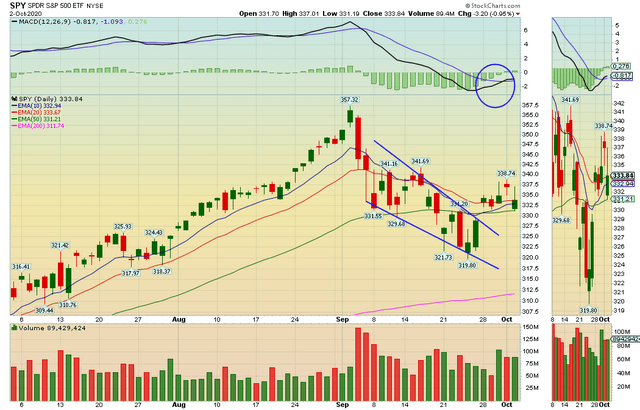 While prices broke out, they really haven’t made a strong move higher, instead trading right in line with the EMAs. This occurred even though volume was higher — which theoretically should indicate rising demand.

The QQQ was also a bit weak but for different reasons: 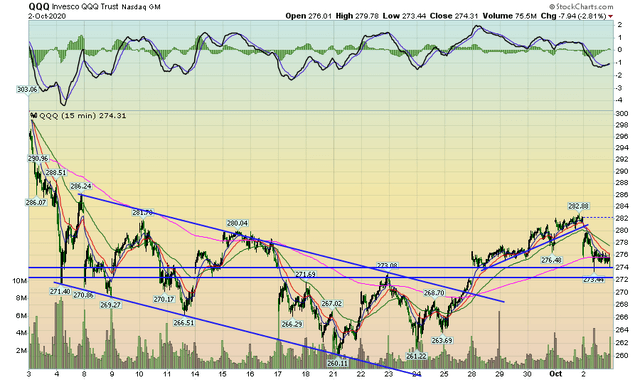 Prices broke through resistance at the beginning of this week. Prices continued to move higher until Friday (far right) when prices fell back to near Monday’s opening levels. 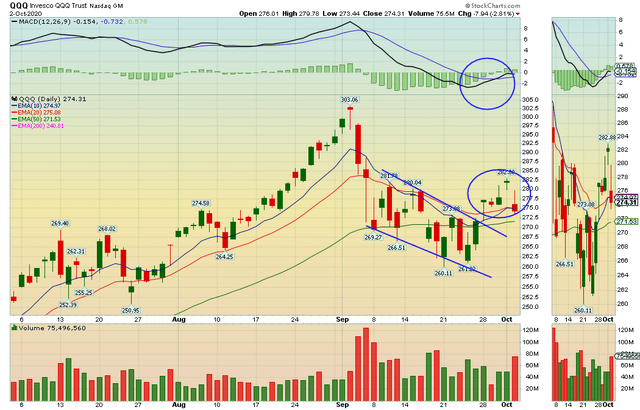 So, the SPY and QQQ have broken out. But overall, their respective moves have been less than inspiring with prices trending more sideways instead of higher.

That stands in contrast to the smaller-cap indexes.

Although there isn’t a clean lower trendline, the IJH (mid-caps) clearly rose on last week’s chart. Note the 200-minute EMA in magenta, which rose all week. 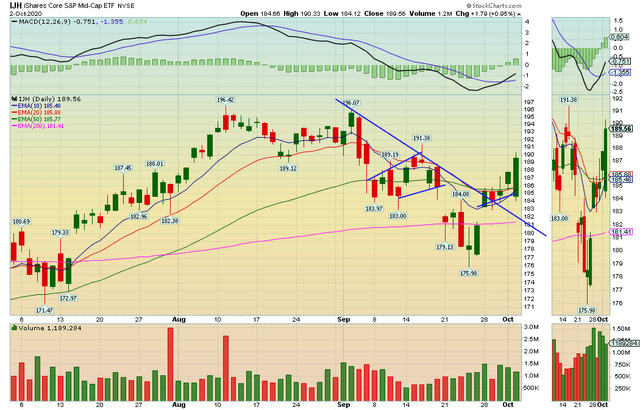 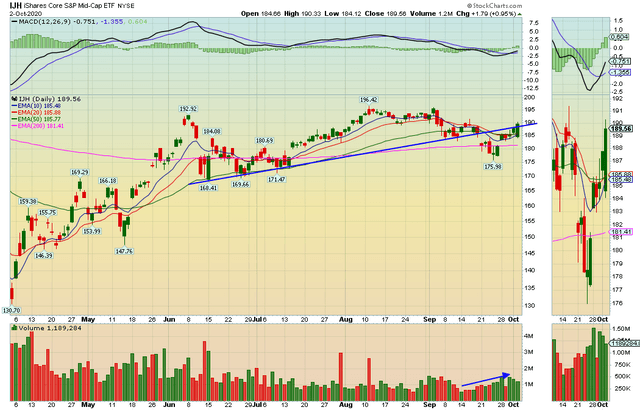 But on the 6-month time frame, the IJH just barely moved above its trend line on Friday. 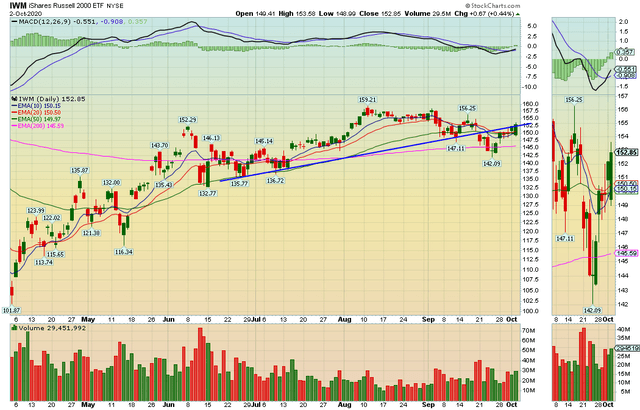 Small-caps (IWM) have the same overall pattern as mid-caps: a good five-minute chart and breakout on the three-month chart. But prices are contained on the 6-month chart.

Major averages conclusion: wait at least one more week. It looks like smaller-caps want to lead the general market higher — and, they’re clearly moving in that direction. But we need the 6-month charts to show enough upward movement coupled with some better moves on the part of the larger-cap indexes.

Let’s start with the best and worst-performing ETFs:

This week, there are two new ETFs in the week and month columns: utilities and real estate. This is a clear shift into a more defensive posture. Industrials are still in the month and 3-month columns while basic materials are only in the 3-month and 6-month columns. Technology and communication services — two of the largest members of the SPY and QQQ — are only on the 6-month and 1-year charts.

Energy is in the top spot in all five time frames — a rather inglorious position. Now we know where tech and communication services went — to take a spot in the week and month columns on the worst performing sectors table. Real estate — which appears twice in the shorter time frames on the best-performing table — is still in the longer time frames as are the other defensive sectors.

Next, let’s take a look at the RRG chart: 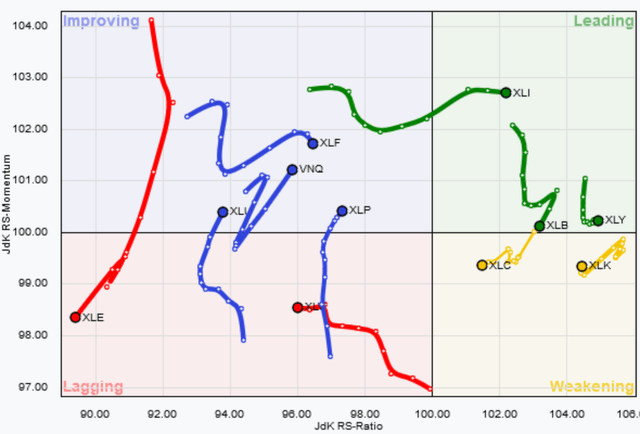 Let’s start in the lower right-hand section of the table. Technology and communication services are weakening. Consumer discretionary is headed in that direction, although it hasn’t made the transition yet. The basic materials ETF is about to cross over. Next, look at the lagging-improving quadrants on the left. Consumer staples and utilities have both moved into the improving sector; health care continues to lag. Real estate has reversed course and is now improving. The combined reading of these movements is that traders are shifting to a more defensive posture.

Next, let’s take a look at some sector charts, starting with the “big four” of tech, communication services, consumer discretionary, and health care. 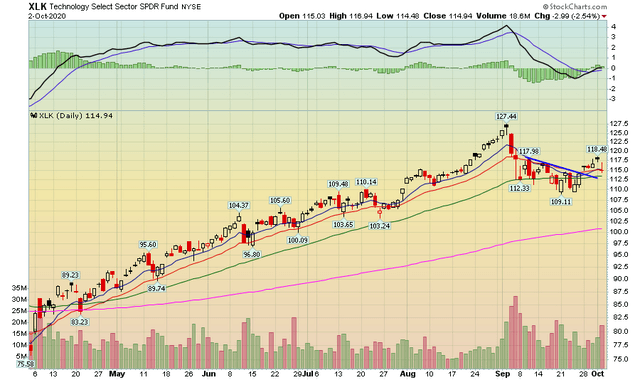 Prices broke through resistance this week. Although volume rose during the last four days, the chart printed small price bars. On Friday, prices fell back to the shorter EMAs. We see the same price pattern … 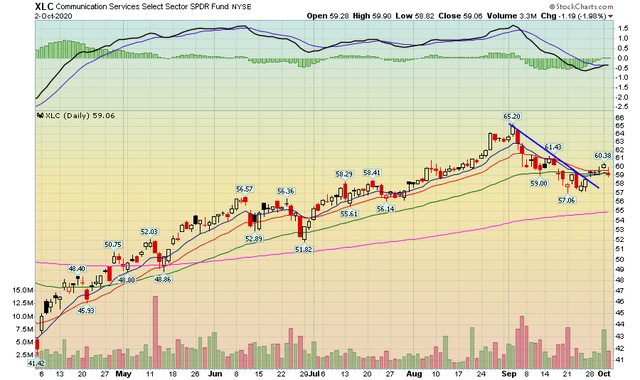 … on the 6-month communication services chart. 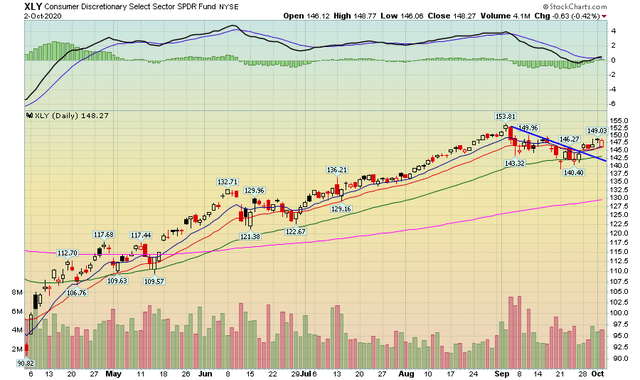 The consumer staples chart has a marginally better chart; the price bars are fuller; the volume increase is more pronounced, and the upward trend is a bit stronger. 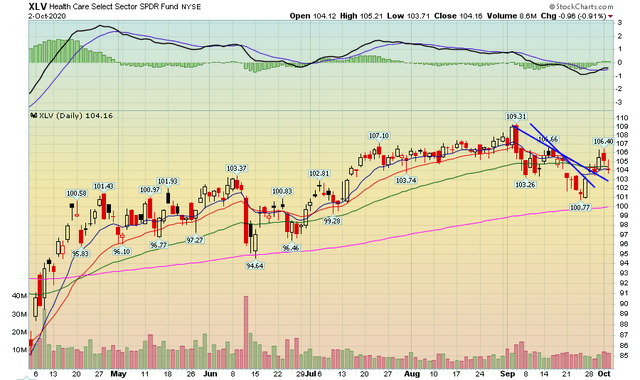 The health care chart was doing very well until prices fell on Friday.

These charts (XLK), (XLC), (XLY), and (XLV) comprise the bulk of the QQQ and a majority of the SPY (see links above). The averages can’t make major advances without them.

Financials are also an important sector. But that chart is also weak: 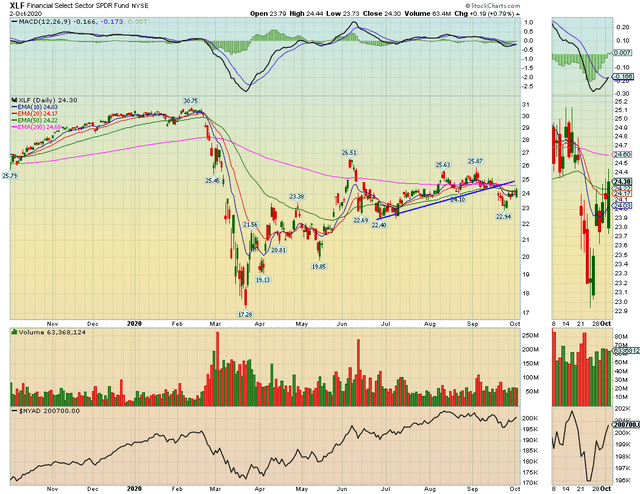 The XLF broke trend mid-September. It is now below the 200-day EMA as are the shorter EMAs.

Adding all this up, there is ample reason to continue staying on the sidelines for now.

Disclosure: I am/we are long XLV, XLP, XLU. I wrote this article myself, and it expresses my own opinions. I am not receiving compensation for it (other than from Seeking Alpha). I have no business relationship with any company whose stock is mentioned in this article.