Investors might not be very familiar with the stock of Albertson’s (NYSE:ACI). Although the grocery store chain is 81 years young, it only recently became a public company after its initial public offering in June. But for defensive investors looking for pandemic-proof stocks, grocery stores in general and Albertsons in particular may be worth a look.

Its stock is cheaper than rival Kroger (NYSE:KR), but like Kroger, Albertson’s is also posting blockbuster sales and profits during the pandemic. Yet shares trade about 15% below its June IPO price of $16, which was below the $18 to $20 range the company had hoped for.

Albertson’s was also given a gift recently, as it was able to buy back a significant amount of shares below its already-discounted price. 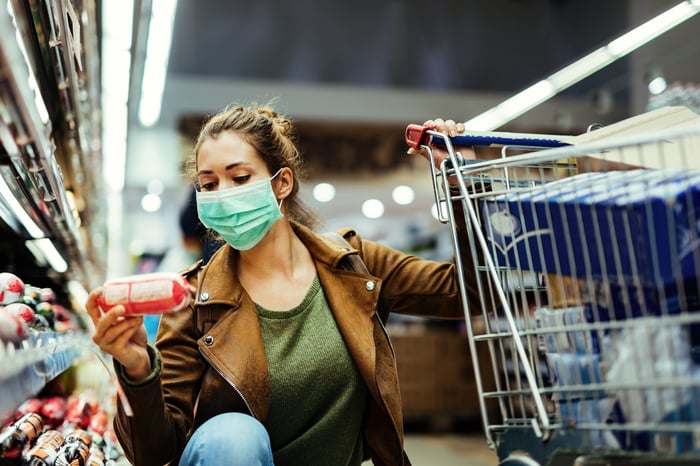 A forced sale is music to shareholders’ ears

On Monday, Sept. 14, the company entered into an agreement with asset management firm Gabriel Assets to buy back a bit more than 6.8 million shares of the company at $12. That’s 25% below the IPO price and below the current share price around $13.30.

Those 6.8 million shares represent about 1.2% of shares outstanding, which the company paid for with cash on hand. As of the last quarter, the company had just over $2 billion in cash on its balance sheet — plenty to cover the $77 million or so for the transaction. In a regulatory filing, Albertson’s management said, “The repurchase represented an unanticipated opportunity for the company to reacquire a significant block of shares of Class A common stock at a significant discount to market.”

A slight bump for existing shareholders

Repurchases can be positive for shareholders if a company repurchases shares at a discount to their intrinsic value. Judging by Albertson’s lagging share price and the discount for the purchase, it certainly appears this buyback fits that bill. Albertson’s also looks rather cheap on a fundamental basis, with shares trading at just 6.3 times its trailing-12-month net income.

Why so low? There are a couple of valid concerns around Albertson’s. First, Albertson’s has a fair amount of debt — around $8.7 billion as of last quarter. There is also an additional $1.75 billion of 6.75% convertible preferred stock, which is convertible to equity at a price of $35.68. Therefore, it’s possible these convertibles should also be counted as high-yield debt, which would bring the company’s debt load to $10.5 billion. Still, Albertson’s has done a good job of lowering its debt load in recent years. Since early 2017, the company has reduced its debt by about $3 billion.

Second, the first nine months of the year have been uniquely positive for grocery stores. In its 16 weeks ended June 20, Albertson’s reported identical store sales of 26.5%, a massive number that boosted the company’s revenue and profits. Once the pandemic subsides, analysts expect the next fiscal year to show a profit decrease. For instance, current earnings per share estimates for Albertson’s fiscal year ending February 2021 call for $2.18 per share, but estimates for the year ended February 2022 are just $1.50.

Value investors should put Albertson’s on their watch lists

While the above are all valid concerns, value investors should still put Albertson’s on their watchlists. For what it’s worth, analyst price targets range from $15 to $26 per share for the next 12 months, all above today’s price in the low $13 range.

Additionally, part of the reason Albertson’s had such a high debt load is that it had been investing heavily in digital capabilities, remodeling stores, and developing high-margin private label brands. The company’s improvements earned it the Retailer of the Year award from Supermarket News in July.

With accretive buybacks, a low share price, and an improving business, Albertson’s may not be a glamorous name, but it’s a very cheap stock, and its business is performing well right now. It’s one to watch.