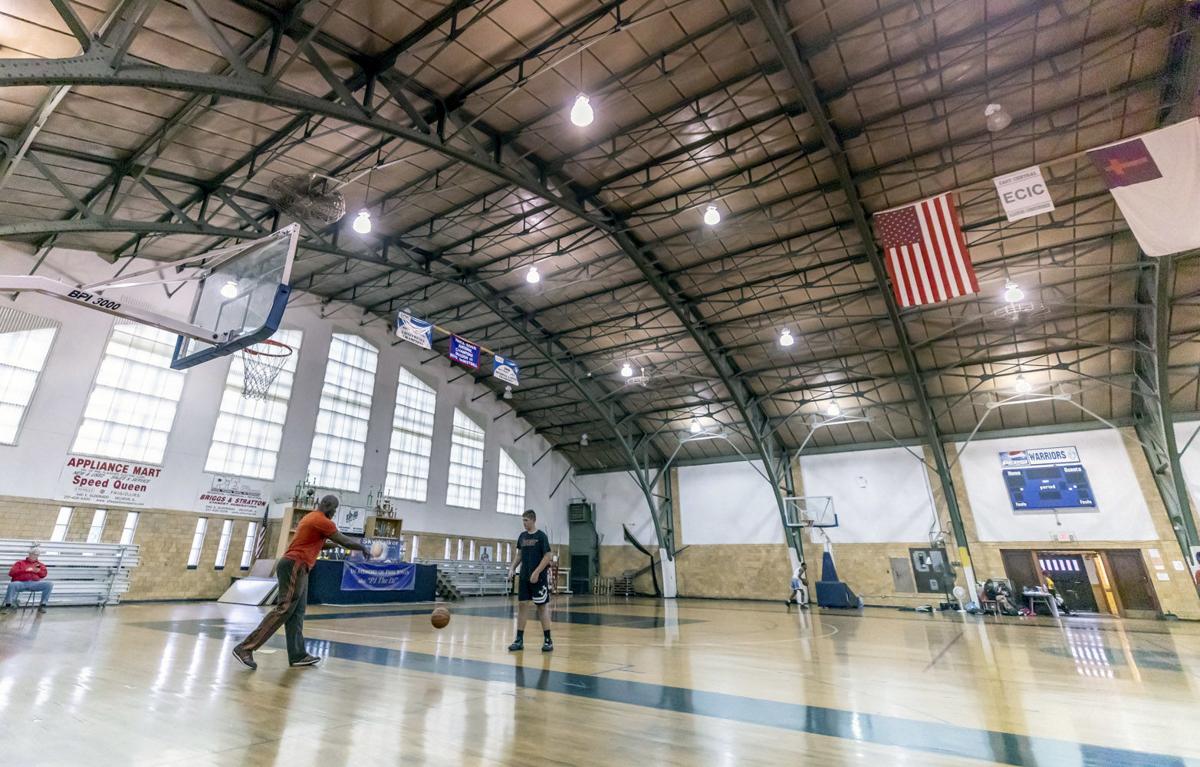 Rodney Walker trains with Wyatt Weybright on Tuesday afternoon at SkyWalker International Sports Complex. The athletic center has struggled to stay open during the pandemic. 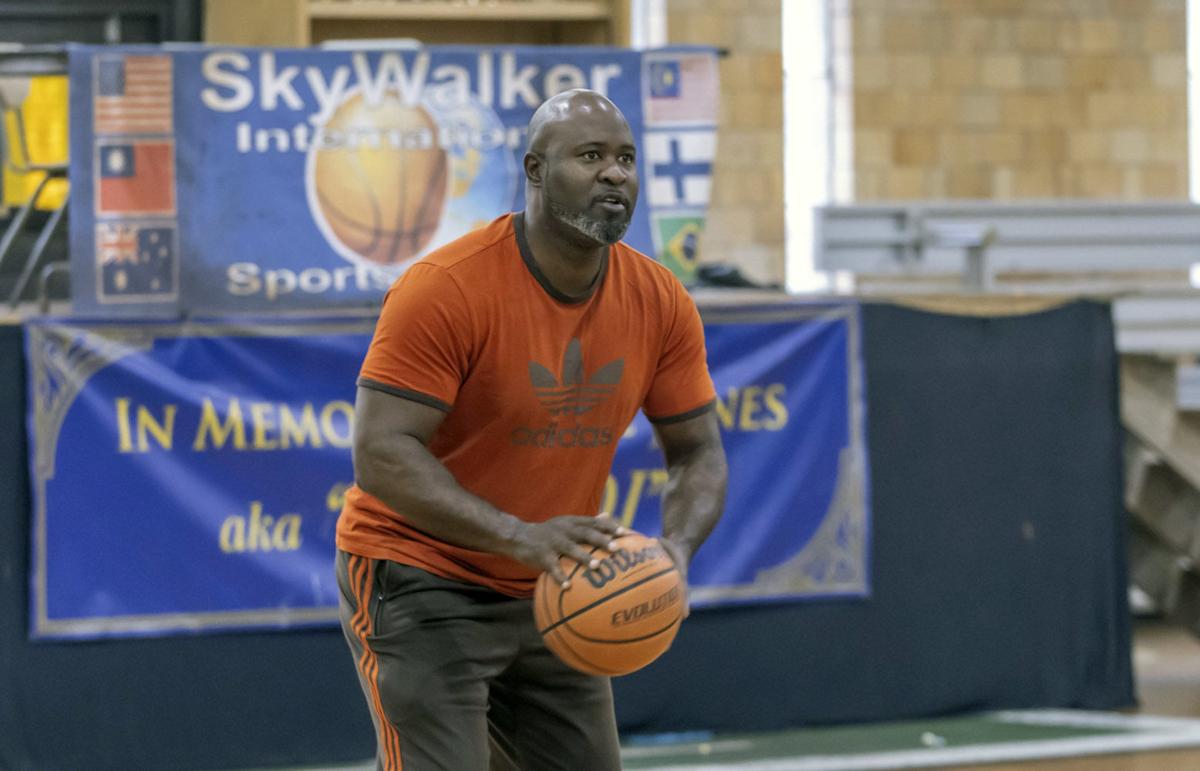 “I love the gym and I love developing the youth in Decatur, but when it starts to hit me personally where I can’t do things for my family, it becomes tough,” Rodney Walker said about the financial impact COVID-19 has had on his business. 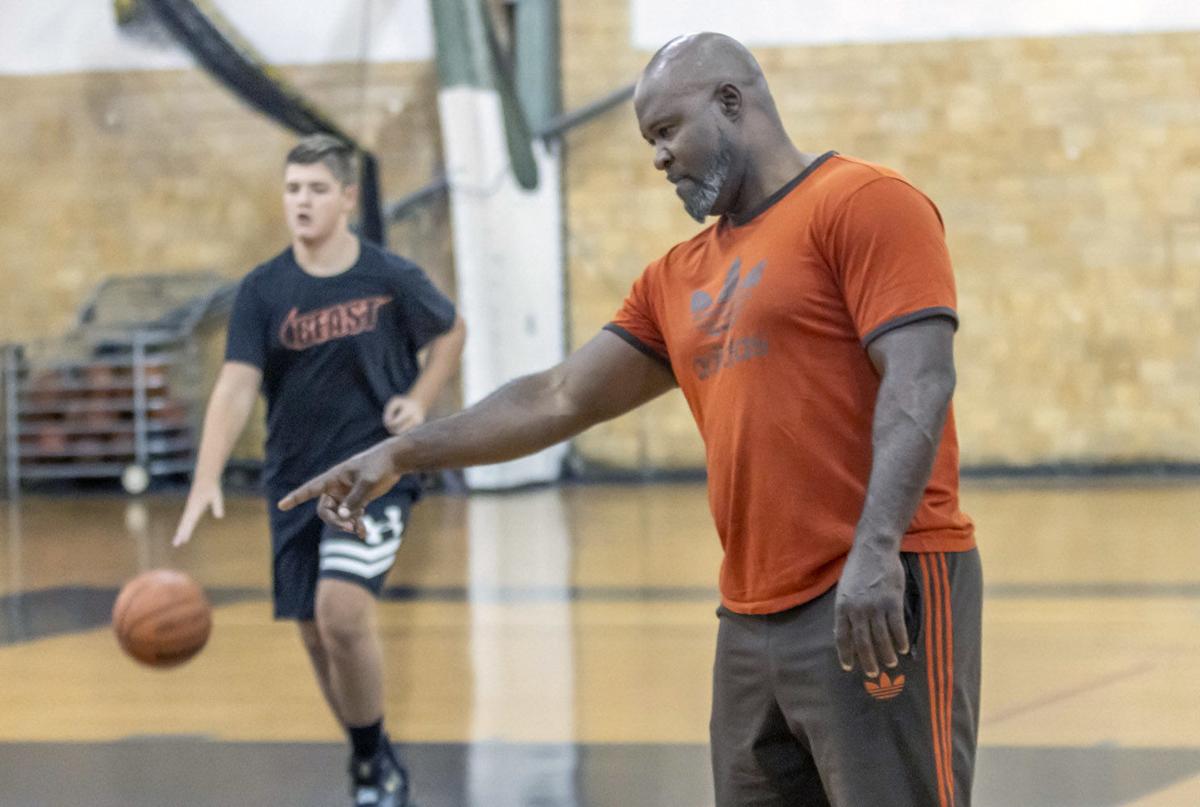 DECATUR — Like a sea captain keeping his ship afloat, Rodney Walker has tried his best to keep the SkyWalker International Sports Complex open and available to athletes during the COVID-19 pandemic.

The athletic center, located in the former Decatur National Guard Armory, has struggled — just as many Central Illinois small businesses have — during the past six months of COVID-19 restrictions. For sports-related businesses, restrictions on athletic team play and the number of spectators that can attend events has meant limited income.

Walker, a Decatur city councilman and Eisenhower boys basketball coach, has been forced to finance the organization himself, and without donation support from community members, the complex would have closed over the past few months.

“Basically from March until this past month, I have personally had to come out of my pocket to keep things afloat because we aren’t able to run big tournaments where we have a lot of people in the gym and we are just limited as to what we can do,” Walker said. “That kills my revenue and the money that we would have made in March would have floated us for the summer during our more dead time. But we didn’t have the opportunity to make that money to cover us. We are still feeling the effects from way back in March.”

While businesses that involved gathering in gyms are particularly vulnerable during the COVID-19 pandemic, they’re not the only sports-related businesses either suffering or forced to make major adjustments. Companies that sell sporting goods or offer screen printing and embroidery services, and restaurants that depend on pre- and post-game fan rushes around big sporting events are also feeling the effects.

Walker said that while he believes team sports can move forward safely, without a solution that allows large crowds to attend events, the financial future is bleak.

“I think that they can work around the team’s playing but really the lack of spectators is really going to be the biggest issue,” Walker said. “That is where you generate the revenue from the spectators, so I hope they can find a safe way to play, but I feel sorry for the spectators that want to come out and can’t.”

Hardin said he had never seen an economic downturn like the one that hit in the spring.

“When the pandemic hit, our sales dropped 40% from last year,” Hardin said. “When it first hit some people were doing a little bit of buying still, but a lot of people were holding off and seeing where things were going to go from there.”

Chad Hobbs owns two businesses in Bloomington — The Factory (aimed at adults) and The Athlete Factory (aimed at school-aged athletes). They work with athletes from fourth grade to professional on building their strength, conditioning and performance.

COVID-19 forced Hobbs to close both businesses in mid-March. But both reopened June 1.

“We were doing pretty good prior to COVID and March is usually a pretty big time for us,” Hobbs said. “But we missed that in the initial wave and the shutdown. We ended up losing quite a bit during that because people couldn’t come in.”

After a Friday night football game in Maroa, Crawford’s Pizza and Pub is usually jammed packed. They bring on additional staff and extend hours to accommodate the post-game rush when the Trojans have a home game.

“That is our bread and butter,” Crawford’s front of house manager Meredith Jones said.

Restrictions on restaurant seating and the lack of fall team sports have hurt the restaurant at its three locations in Maroa, Mount Zion and Moweaqua.

“We have actually had to shorten (our hours) because we don’t have the sports that we used to — and it isn’t just football, it’s all the after-school activities,” Jones said. “We have definitely staffed less than we normally do. At (Maroa), we had to cut maybe one or two extra people that we had normally on the weekends.”

Your membership makes our reporting possible.

Rork’s Pork, a catering and food truck company based out of Moweaqua, is owned and operated by former Raiders track and field coach Todd Rork. Rork has lost eight bookings at festivals and personal events during the pandemic, including catering the Indoor Track and Field Championships at Illinois Wesleyan University in Bloomington this past spring.

“I have been pushing (our food truck business) to keep me busy and fill in the gaps, but some of those festivals and events are so big, you can’t replace them one-for-one,” Rork said.

Adapting to the changing times

With sport cancellations and adjusted schedules, Hardin’s company, Dallas-based BSN, searched for other opportunities and products for the schools.

“We are staying afloat because one of the companies that we have for our custom uniforms started doing the face masks so we did custom masks in the school colors with their logo on it,” Hardin said. “Luckily because of the pandemic, we did over two million masks order so that was big for BSN. Every school was going to have a mask anyway, so you might as well promote your brand.

“And we also got into the signage — keeping six feet apart and wash your hands — and so the schools are preparing for coming back and so that was big.”

Hobbs’ personal training businesses began using an app called TrainHeroic that he and his staff used to give clients workout videos and reach out to explain how to do the workouts from home.

“That helped in getting the regular kids back in during the shutdown,” Hobbs said. “Since we have been able to open our doors officially, we have actually done pretty well. We are lucky enough to deal with some athletes who are very serious about what they do and they want to train and they have a good mindset. If they can’t play the sport, they know they still need to be training because if you are not then someone else is going to pass you up.”

Crawford’s has had to eliminate about half of its in-store tables to accommodate social distancing, but the community has helped with an increase in pick-up ordering.

“We had a lot of people say that they were going to support us in whatever way they can when we had to close and could only do carryout and delivery,” Jones said. “People who never do carry-out before tried it to support us. The community came together and allowed us to continue and we have a strong following and we really appreciate that.”

The SkyWalker complex is not a nonprofit 501(c)(3) organization and doesn’t receive governmental funds to operate, but community support has also been what’s kept it afloat.

“There have been people who live out of town and not in Decatur who have helped out,” Walker said. “We don’t really know when this COVID is going to end and if it wasn’t for people stepping up in the community we probably would have had to close the doors last month. We are hanging on by a shoestring. I love the gym and I love developing the youth in Decatur, but when it starts to hit me personally where I can’t do things for my family, it becomes tough.”

Typically, SkyWalker has a vibrant AAU basketball scene and rents out the courts for team practices and a host of other activities including boxing training and music performances. With league play canceled, Walker has focused on personal training several nights a week.

“We had to cancel our youth basketball league and so the only way we can operate is through our attendance and getting a population to come in to pay the league fees and sign up for leagues and participate in our different events. Without that we can’t survive,” Walker said. “I’m doing a lot more trainings and getting kids ready because they can’t really get into a lot of gyms right now. It is individual trainings and small groups to do volleyball and different things like that. We can’t do big boxing shows where the public can come in and have a good time and where we really make money off of having a packed house.”

Even when COVID-19 does begin to wane and more areas open, there will be long-term implications. Hardin said the sports apparel and equipment business will be feeling the ramifications for the foreseeable future.

“The biggest thing that coaches and customers don’t really understand is that as they come back to school and are getting ready to order all the major companies — Nike, Under Armour, Wilson, Rawlings — that they been shut down for months and so there is no stock,” Hardin said. “There was nobody making things and if they have the stock, it can take a long time to get it out of the factory because either they’re on a skeleton budget or they are that far behind.

“Nike and Under Armour make their things overseas and so that’s always a tough situation to get those orders and that can take three to four to five months to get them.”

Both Hobbs and Hardin said the the long-term financial future for sports-related businesses is secure.

“With a pandemic, no one really knows what’s going to happen, but as long as there are parents and there are sports, they are going to support it, and the programs are going to get support somehow,” Hardin said.

“Our only option is to survive — that’s what we tell our kids and what we need to practice ourselves,” Hobbs said. “If I think negatively about the situation and think it is too big of a hurdle, then what is that telling our kids? I’m confident that we can do it — it’s going pretty well right now.”

Get local news delivered to your inbox!