Note: I have written about Yelp previously, investors should see this as an update to my earlier article on the company

Since my last article on Yelp (YELP), the company has struggled to kick on share price wise. Now, down 12% since then. Yelp’s reliance on small businesses has hit the company hard over the last few months. While the greater transition to online booking will benefit the company, the ties to the restaurant and retail sectors are simply too strong, and in the current environment, that is not a great position to be in. While some may argue that Yelp is ‘cheap’ at current levels, investors must look forward and wonder where the future growth catalysts will actually come from.

Yelp’s revenues remain small-business focused, as they look to sell advertising space to local businesses so they can drive greater traction into stores. While previously this was a positive as Yelp became the go-to site for the small businesses as they could offer targeted marketing like no other, in this environment, it has become a liability. I highlighted this issue in my previous article and since then, Yelp has provided more clarity on how heavily small businesses are being affected by COVID-19 and the picture it creates doesn’t look good.

Yelp recently released its local economic impact report for the end of August. The opening of the report talked about how well businesses have adapted to the conditions of COVID-19, of course, this is the focus for Yelp that wants to create a more optimistic picture for investors. The actual figures in the report provide less optimism. The report shows that business closures have continued to rise through the last few months as well and there is no sign of it slowing down soon. Temporary business closures have, of course, slowed down as the United States has started to reopen but even then, over the last couple of months, this figure has started to slowly increase again. This will primarily be down to potential lockdowns on a state by state basis, depending on whether there are fears of a spike in cases on a local level.

What is more concerning for investors is the consistent rise in permanent business closures since march. This figure now stands at 97,966. Since Yelp’s last report in mid-July, there has been a 34% rise in permanent closures. Much of these closures are still weighted towards Restaurants, which was the sector with the most permanent business closures. Yelp highlights that some businesses have been resilient over the period such as professional services, but these businesses have little to do with Yelp as they are focused primarily on retail and hospitality. Currently, 60% of business closures are permanent, an outstanding figure that shows the effects COVID-19 has had on smaller entities are not temporary.

I found the image that Yelp created for the businesses that are struggling to be quite powerful: 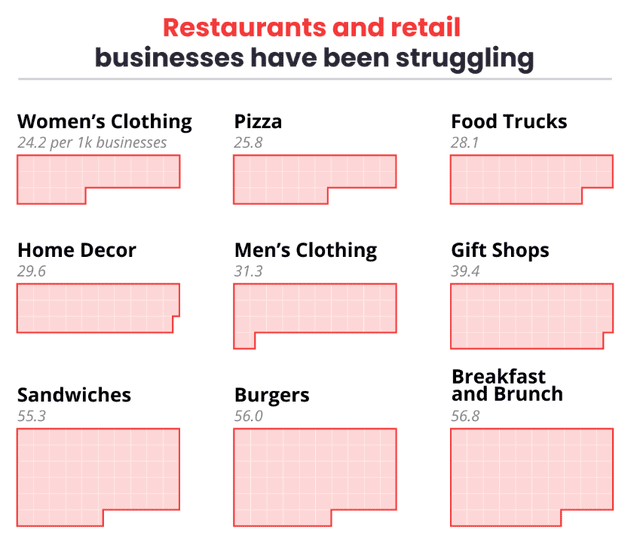 As the image shows, the businesses that are heavily affected are many of the ones that Yelp relies on for their revenues.

It is also important to point out that in a period of great adversity for many small businesses, having a poor relationship with Yelp does not help. That has been the case and is a big problem that the company still faces. Small businesses have already been facing weaker demand, but this is then exacerbated by the potential for poor reviews left on Yelp.

Q2 results showed a heavily affected 3 months for Yelp. Revenue fell substantially to $169 million in comparison to $245 million in the same period of the prior year. Even though this beat expectations, shares still sank 12% following the results. It is clear to see that the market can see that Yelp’s headwinds aren’t going away anytime soon. This was actually outlined in the results by the company themselves. At the end of the quarter, Yelp started to see a recovery in consumer and advertising revenue; however, in July, site traffic actually started to plateau. The last part has a huge significance. It shows that the problems the company is currently facing will be lasting and there is no quick fix to the current scenario Yelp finds themselves in. This also shows that consumer demand isn’t returning as quickly as some may have initially believed it would. Many people aren’t yet prepared to go back into restaurants, much of this is due to the increasing availability of food deliveries through services such as Grubhub (GRUB) and Uber Eats (UBER). Many of the businesses that previously provided Yelp with local advertising revenue may not have the capacity to do so again and these businesses aren’t even accounted for in Yelp’s economic impact report.

In 2019, Yelp reported $1.88 in EPS. That means at current prices, Yelp has a historic P/E of just over 10. However, the situation has now completely changed and Yelp will not see a return to this level of profitability any time soon. On a forward basis, analysts are expecting a full year 20 P/E of 31 cents in 2020. This gives Yelp a far more pricey P/E of 64. Results, thereafter, will significantly improve according to analysts as Q3 ($0.01) is expected to be heavily affected but Q4 shows a sharp recovery in profitability ($0.26) – Q4 has always been a pivotal period for Yelp. Analysts see an EPS of $1.17 in full-year 21 giving Yelp a forward P/E closer to 18. While this may appear good value, I am uncertain about whether Yelp will actually see as sharp of recovery as analysts believe. This would, after all, be a decline of just circa 38% from pre-COVID-19 levels in profitability, even though 100,000+ potential advertising partners will have been lost and other small businesses who do survive will have their spending budgets slashed.

Yelp appears to be good value on the face of it, but when looking deeper, it is clear to see that the company is going to continue to see a huge deceleration in growth going forward. Not only this but the headwinds Yelp faces aren’t temporary and will have lasting effects on the crux of their business, the small businesses. They are Yelp’s customers essentially, not those who provide reviews. The previous niche of Yelp is becoming lost as small businesses have been hit the hardest. For these reasons, I do not believe Yelp is worth the risk at current prices, even though shares may seem cheap, I believe investors will soon find current prices aren’t so much so.